Straining against the Void 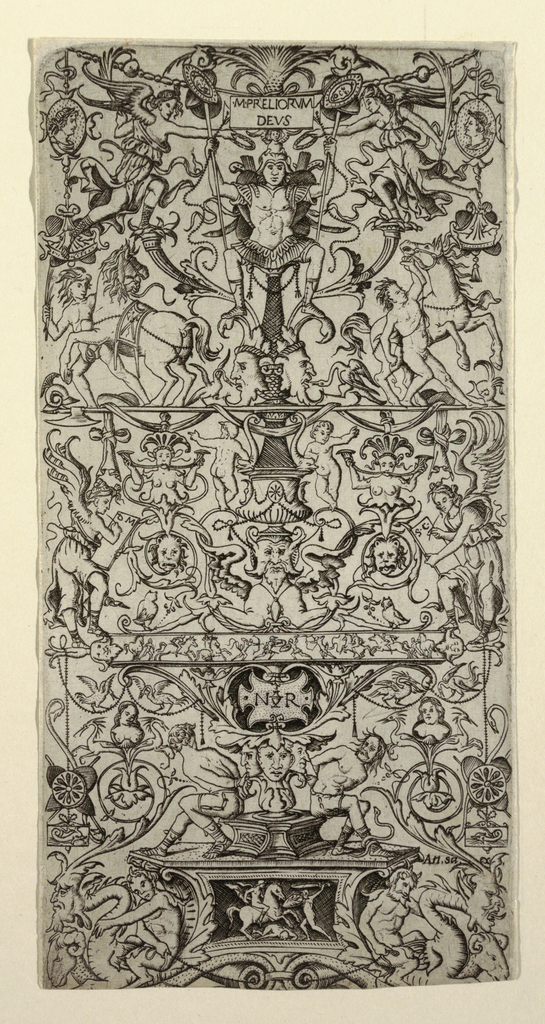 Some of the most common elements found in grotesque designs are pairs of contorted nudes known as ignudi (plural of ignudo). In many designs, figures assume postures that are variations or counterposes of their lateral mate’s. Like the grotesque motif itself, these compliant figures invite the artist to invent, exaggerate, and rearrange their parts into endless permutations. In the sixteenth century, many Italian artists valued designs composed alla fantasia—from memory or imagination—over the accurate replication of nature, believing this to be a greater demonstration of virtuosity. The straining musculature and dynamic poses of ignudi evidenced an artist’s mastery of anatomy and their god-like ability to create; by breathing life into their figures, artists were said to possess a divin pennello (divine brush).

The nude body was closely associated with art of the classical world and many artists looked to ancient models for inspiration. Most famously, Michelangelo’s ignudi on the Sistine chapel ceiling have precedents in ancient Roman cameos and sculpture. The ceiling fascinated generations of artists, who visited the Vatican to make studies and mirror copies of Michelangelo’s figures. Their ecstatic postures became embedded into the repertoire of artists and found their way into grotesque designs from the Renaissance onward. Michelangelo’s ignudi serve to frame the ceiling’s narrative scenes, while in grotesque designs they often constitute the main axis—the peripheral made central.  In both cases, the ignudi occupy an ambiguous space; bereft of a logical context, they strain against the void.

You can find many more ornamental beasts included in the exhibition Fragile Beasts, which is on view at  Cooper Hewitt through January 16, 2016.

You can also color your own creatures in the Fragile Beasts Coloring Book, available online at the Cooper Hewitt SHOP.