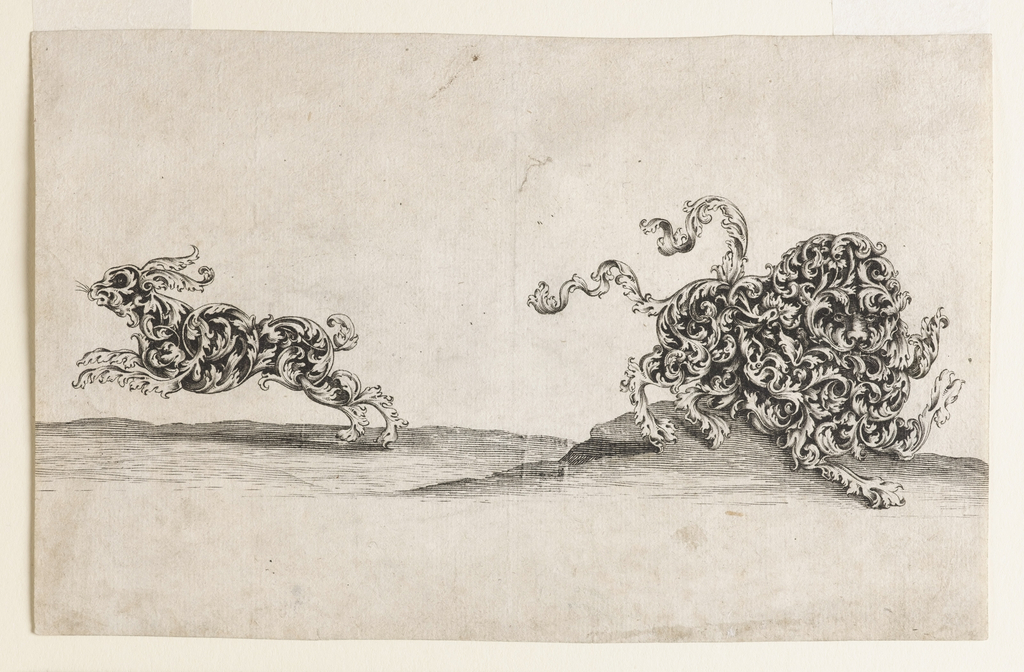 A lion and a hare are composed entirely of scrolling acanthus leaves in this late-seventeenth-century engraving. It is the fifth plate from a suite of six designs for gold ornament, entitled Neu-ersonnene Gold-Schmieds Grillen (New Designs for Ornaments in Gold). The acanthus motif, whose origins date to ancient Greece and Rome, was omnipresent in European decorative arts and metalwork during the seventeenth and eighteenth centuries.

At this time, the European print trade was dominated by publishers in wealthy merchant cities. Nuremberg was a major manufacturing center for German luxury goods and art, including metalwork and printmaking. Ornament prints featuring inventive designs were a source of inspiration for goldsmiths and artisans working in various media. This suite was printed in Nuremberg by Leonhard Loschge in 1698 and was certainly popular, for the designs were reprinted (in reverse) the same year by Anthonie de Winter in Amsterdam. The series was reissued yet again by Johann Christoph Weigel in the eighteenth century.

There are several stylistic precedents to Von Bömmel’s acanthus animals. In 1610, Christoph Jamnitzer published a book of grotesque designs in Nuremberg featuring a variety of creatures composed of aggregate scrolls and ornaments (fig 1). The Italian engraver Giovanni Battista Bracelli published a collection of bizarre figures including human forms composed of calligraphic flourishes in 1624 (fig. 2). Perhaps most similar is an alphabet of ornamental letters engraved by Jeremias Falck and published in Hamburg c. 1645-50 (fig. 3). Their curling forms are consistent with the auricular style, which evolved in Utrecht in the early seventeenth century. It is characterized by the use of amorphous scrolls and is closely associated to the grotesque tradition in print. Von Bömmel’s designs demonstrate the unabated fashion for fantastical ornament.

You can find many more ornamental beasts included in the exhibition Fragile Beasts, which is on view at  Cooper Hewitt through January 16, 2016.

You can also color your own creatures in the Fragile Beasts Coloring Book, available online at the Cooper Hewitt SHOP.

← Pleasures and Perils of the Tongue
Straining against the Void →