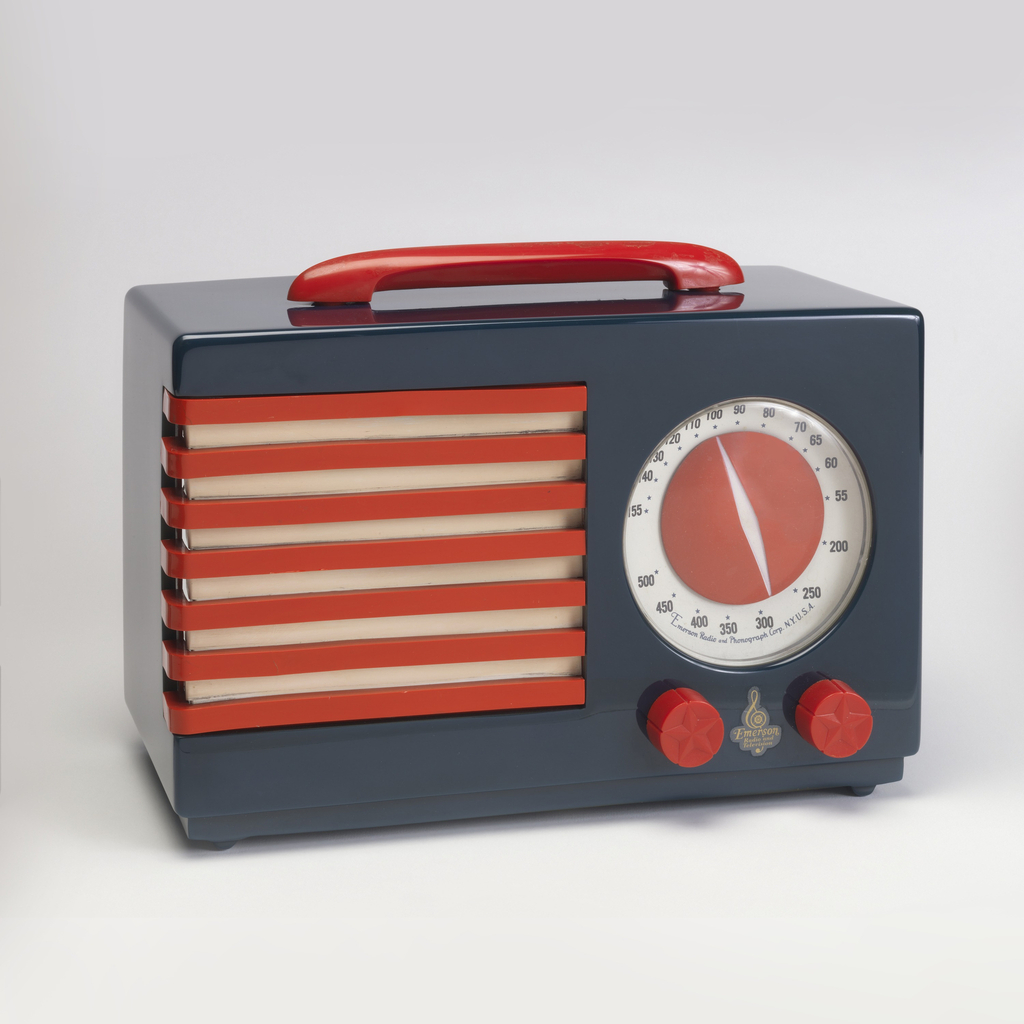 The Patriot radio was designed by noted industrial designer Norman Bel Geddes and manufactured by the Emerson Radio and Phonograph Corporation in 1939. The radio is made from Opalon, a thermoplastic similar to Bakelite, which came into widespread use in the 1930s.

The late 1930s saw the United States begin to emerge from the Great Depression, and see a gradual restoration of national pride from citizens who had weathered harsh economic times. The winds of war were also blowing in Europe as Americans speculated to what degree the country might be involved in fighting overseas. Emerson saw an opportunity to strike a chord with the American people, and put Bel Geddes’ design into production.

Bel Geddes was at the forefront of the streamline design style that came out of the art deco movement in the 1920s. His designs for objects from automobiles to cocktail shakers epitomized the visual language associated with streamlining: smooth rounded shapes, strong horizontal lines and aerodynamic styling that evoked speed and modernity.  The radio came in three colors – red, white and blue – in various combinations for the radio body, knobs and handle.  Bel Geddes, somewhat uncharacteristically chose a rectangular shape for the radio body, but softened the overall appearance with rounded corners. The speaker grill featured repeated horizontal bands wrapping from the front of the radio around to one side, in contrast to the circular tuning dial and control knobs. The knobs were blind embossed with stars to complete the patriotic effect.

The Patriot radio retailed for fifteen dollars, and was heavily advertised in a stars-and-stripes theme by Emerson at its introduction. The introduction was also timed with the twenty-fifth anniversary of the founding of the Emerson Corporation.  The Patriot retains its nationalistic pride to this day as a prime example of American streamline design.

Bill Shaffer is a graduate student in the History of Design and Curatorial Studies program jointly conducted by The New School/Parsons and The Cooper Hewitt Museum.

This radio is on display in Energizing the Everyday: Gifts from the George R. Kravis II Collection, on view from April 27, 2016 through March 12, 2017.

← Peruvian Nets
How to Build a Horse →