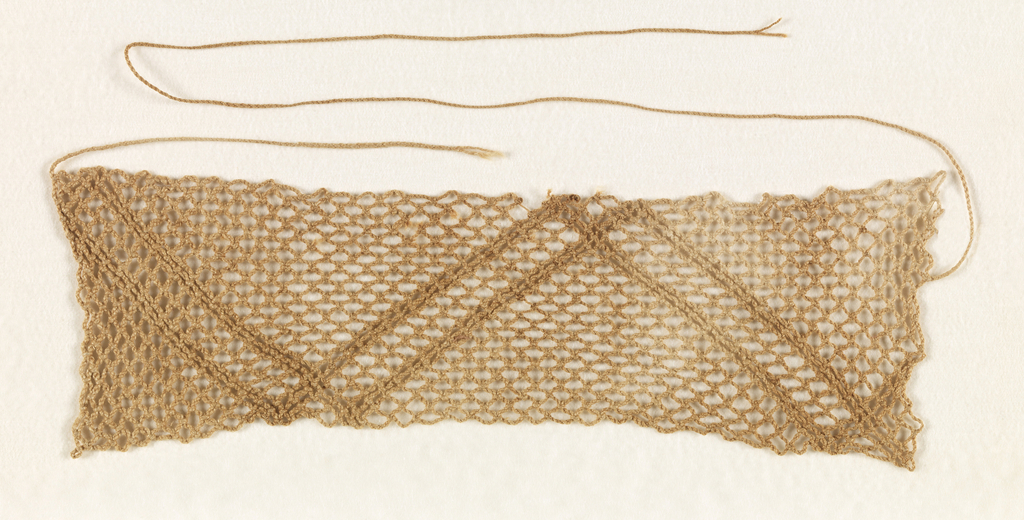 Knotted netting is one of the most ancient methods of constructing textiles, often used for functional objects essential to early cultures, such as bags, snares and nets. Many examples have been found in the middens, or refuse piles, of the Pre-ceramic cultures of the desert coast of Peru. Nets played an essential role in fishing: the Humboldt current, whose cool waters pass parallel to the Peruvian coast, brought an abundance and diversity of sea life which led to the development of some of the earliest maritime cultures in the region.

This small netted piece is composed of vegetal fiber from the stripped leaves of the Furcroya or maguey plant, which is resilient, flexible and strong. Stiff to the touch, the fiber is made pliable in a process that requires separating the long inner fibers from the plants’ thorn-covered fleshy exterior. The variation of the knotting sequence and the incorporation of spaces transform this object from a utilitarian artifact to a work of art.

Elena Phipps received her PhD in Pre-Columbian Art History from Columbia University. She was formerly a textile conservator at the Metropolitan Museum of Art, where in 2004, she was also curator for the special exhibition The Colonial Andes: Tapestries and Silverwork, 1520-1820, whose exhibition catalogue was award both the Mitchel Prize and the Alfred Barr Jr. Award. Her recent book Looking at Textiles was published by Getty Publications in 2010. From 2011 to 2014, she served as President of the Textile Society of America.