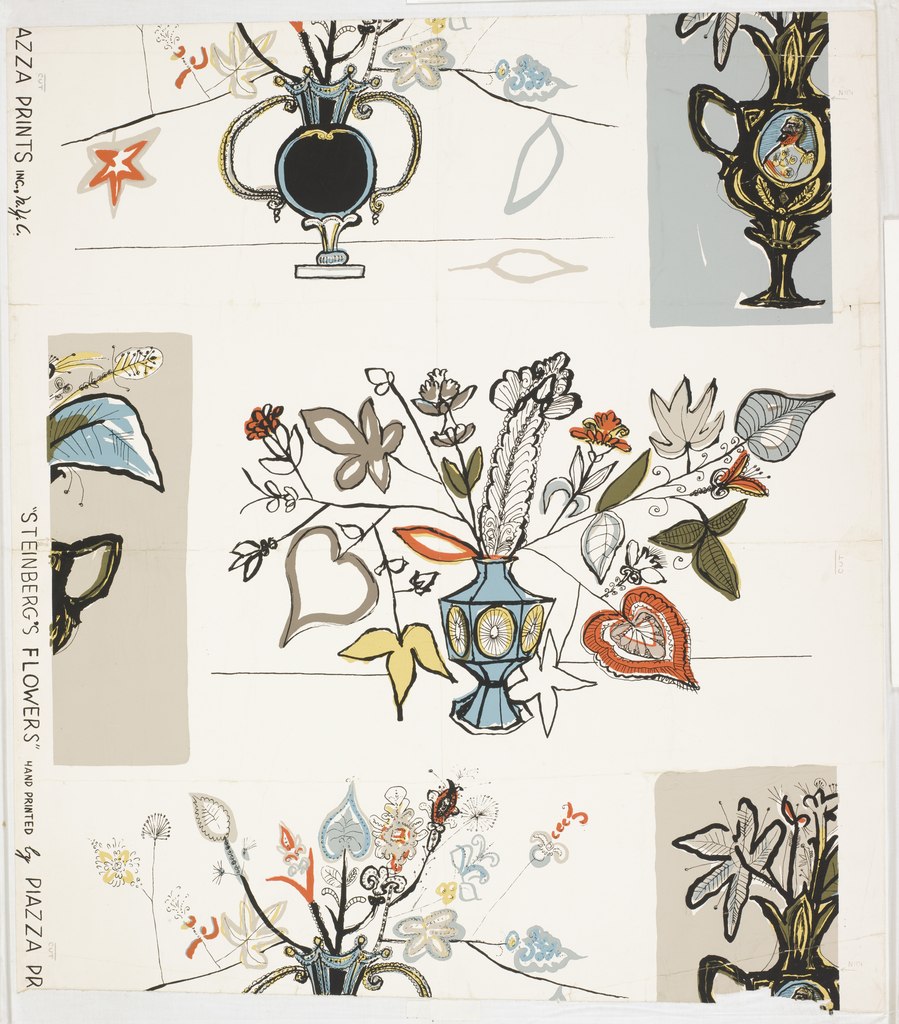 This sidewall was designed by Saul Steinberg (1914-1999), a Romanian/American artist much loved for the dozens of covers and twelve hundred cartoons he drew for The New Yorker. Here, his characteristic ink-work has been expertly copied by the screen printing processes of Piazza Prints, who manufactured this paper c. 1950-1955. Against a white ground, widely-spaced rectangles of gray and slate blue highlight large bouquets of imaginary flowers in antique vases and urns. Pale washes in orange, blue, yellow and green bring color and softness to the assertive black outlines of the objects. According to Ian Frazier of The New Yorker, Steinberg’s goal was to “draw like a child who never stopped drawing that way even as he aged and his subject matter became not childish.” (1) Here, the imperfect symmetry and perspective of the urns and fanciful forms of the flowers do elicit a sort of childlike naïveté, but the thoughtful composition and strong, sure lines ensure that the final piece comes off as the work of a grown-up who really knows what he’s doing.

Artist-designed wallpapers gained popularity in the mid-twentieth century as homeowners looked to express their taste and artistic literacy through home décor. Although Steinberg is sometimes categorized as a cartoonist rather than a fine artist, by the early 1940s his pieces were already on display in museums and galleries. That Piazza chose “Steinberg’s Flowers” as the title of this pattern shows that Steinberg himself was as much of a selling point as the design’s inherent aesthetic merits. Adding to the “fine art” vibe of this paper, is Piazza’s assurance that it was hand-printed in NYC.

← A Teetering Trio in a Pastel Void
WALTER CRANE’S THE ABSURD A.B.C. →