A Teetering Trio in a Pastel Void 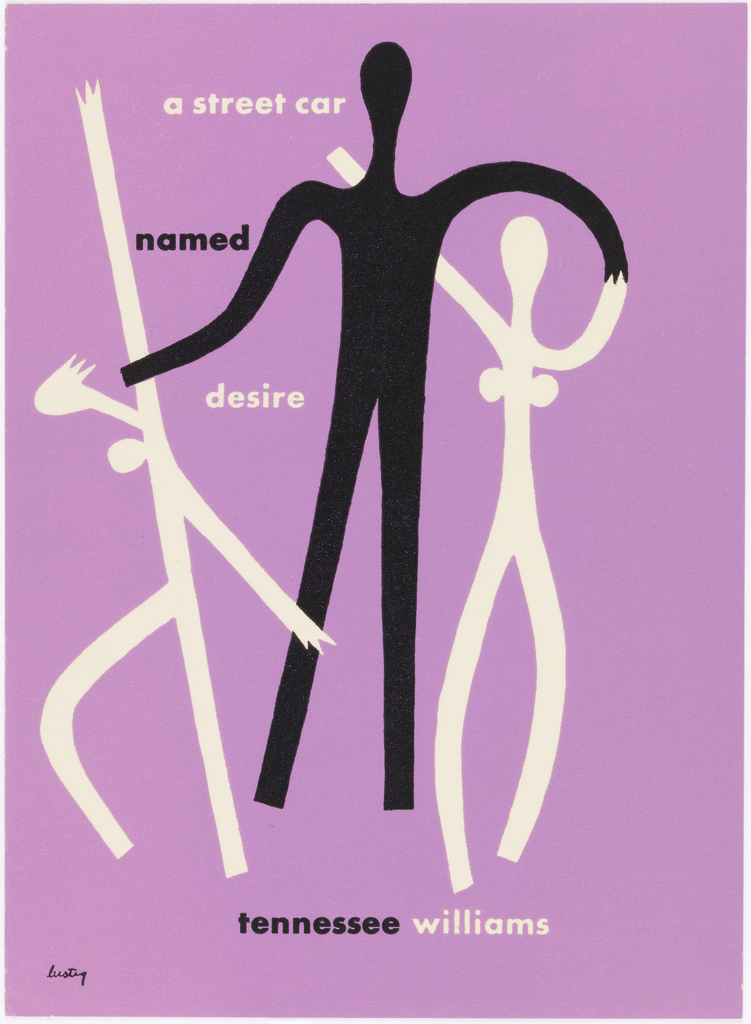 Alvin Lustig designed numerous book covers for New Directions Publishing over the course of his prolific career, including several for Tennessee Williams’s plays. Lustig’s modernist designs, characterized by their dramatic simplicity, contrast with the voluptuous poetry and unapologetic melodrama of Williams’s writing. For this cover for A Streetcar Named Desire, Lustig choreographed a three-way dance between stick figures. Their limbs curve with balletic grace, then snap into modernist rigidity, evoking the tension between the play’s three principal characters.

Williams’s stirring, sweltering drama revolves around Blanche, “the genteel belle…the hungry sensualist, the manipulative flirt”;[1] “STELLLAAAA”—sister, wife, and arguably the most famous name of theater and film; and Stanley, Williams’s object of lust and loathing, whose “animal joy in his being is implicit in all his movements and attitudes.”[2] Their turbulent relationships are less evident in the original playbill, for the play’s 1947 Broadway premiere. Streetcar’s southern setting takes precedence in that illustrative design: Stella and Stanley are dwarfed by their shambling nineteenth-century apartment building in New Orleans’ French Quarter, on an empty street stretching to a spare horizon. In his book design from the same year, Lustig submits the story to the more reductive modernist vocabulary, abstracting its titillating characters, settings, themes, schemes, and neuroses into three stick figures. In doing so, Lustig graphically distills the play to its core subject: sex. Contemporary scholars have approached the script similarly; gender theorist Georges-Claude Guilbert wrote in 2004 that “gender and the rigidity of the gender roles society enforces” were central to the script.[3] Williams, whose queer characters and sexual subtext were often overlooked or excised from productions and Hollywood adaptations, would likely have agreed.

Lustig strips the characters down to some anatomical necessities and organizes a patriarchal hierarchy where female figures flank a dominant male. By playing with the human figure as shape rather than personality, Lustig creates detachment—an ever-shifting dance of directionless and vacant desire. In this way, his figures reflect the complex web of emotional, gender, and sexual politics that plagues the characters’ relationship triangle—a tumultuous tango and turbulent twirl, a teetering trio suspended in a pastel void.

At the precipice of Blanche’s condemnation and descent, she gets real with those around her: “I don’t want realism. I want magic! Yes, yes, magic! I try to give that to people. I misrepresent things to them. I don’t tell truth, I tell what ought to be truth. And if that is sinful, then let me be damned for it!”[4] Lustig transfigures Willams’s characters with his minimalist wand, and, per Blanche’s request, turns sober reality to modernist magic.

Matthew J. Kennedy is one of a precocious few who, at eight years old, could claim his favorite department at the Art Institute of Chicago to be European Decorative Arts. He received his master’s degree from the Parsons/Cooper Hewitt graduate program, pursuing research focused on the intersection of design, popular culture, and his recreational passion of theater. He currently handles image rights and licensing for the Cooper Hewitt’s publishing projects.

← House And Trees Within A Border
Steinberg’s Flowers →