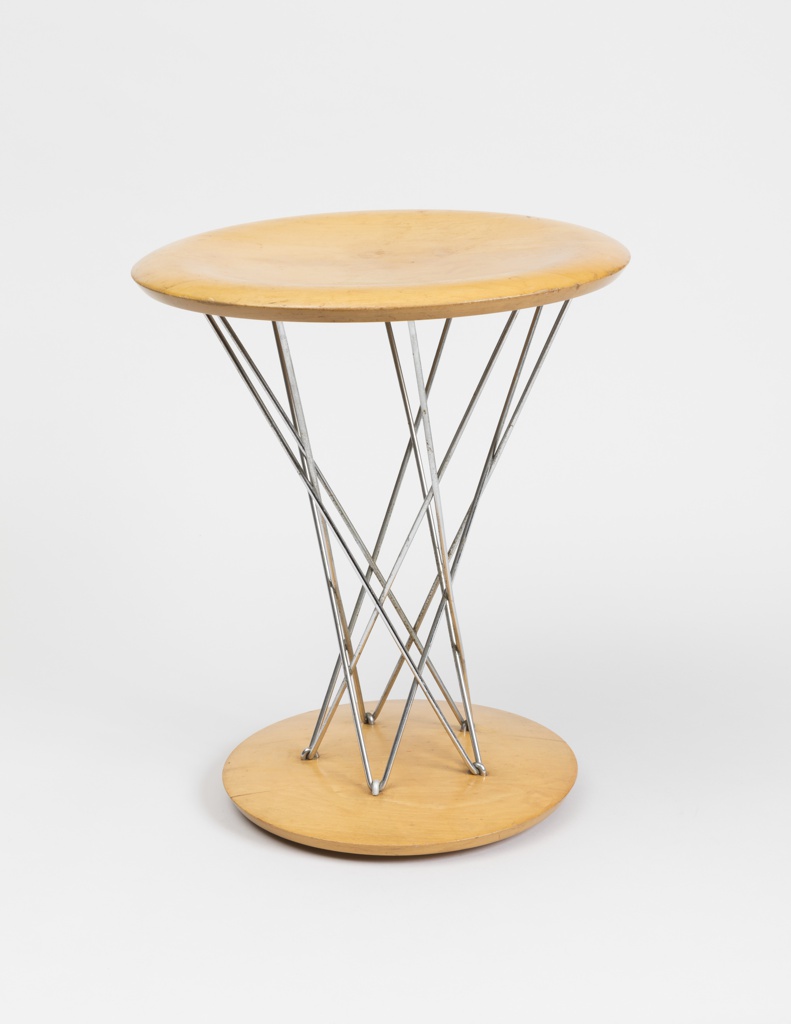 Japanese-American sculptor and designer Isamu Noguchi designed this 86T Rocking Stool for Knoll in 1954. Noguchi was born in Los Angeles but lived in Japan until he moved to Indiana at the age of thirteen. After leaving his pre-med studies at Columbia University to pursue sculpture, he went to work in Constantin Brancusi’s Paris studio between 1927 and 1929, exploring abstraction and modernism in his work. Designed at the height of the Atomic Age, Noguchi’s stool embodies the minimalism and rationalism of postwar design. The basic form of the stool with its rods and discs recalls atomic structure, a scientific motif very much on the minds of mid-century designers and artists.  While there is structural integrity and a feeling of solidity in the stool’s design, there is also a playful feeling, as if the seat were a cork about to pop. For the comfort of the stool’s occupant, the seat has a subtle depression of a concave curve, which is echoed as a convex form in the stool’s base.  It is possible to sit perfectly still on the rocking stool, but its structure also encourages a gentle sway. The steel rods that connect the seat and base are V-shaped and rise from a five-pointed arrangement at the base to an evenly spaced tensile array at the seat. At the suggestion of Hans Knoll, these wire rods were used in homage to fellow Knoll designer, Harry Bertoia, whose popular wire-frame chairs were also released by Knoll in the 1950s. Noguchi’s Rocking Stool was only produced by Knoll for five years, until 1959, and was later re-issued by the Noguchi Foundation.

This stool was on view in Energizing the Everyday: Gifts from the George R. Kravis II Collection.