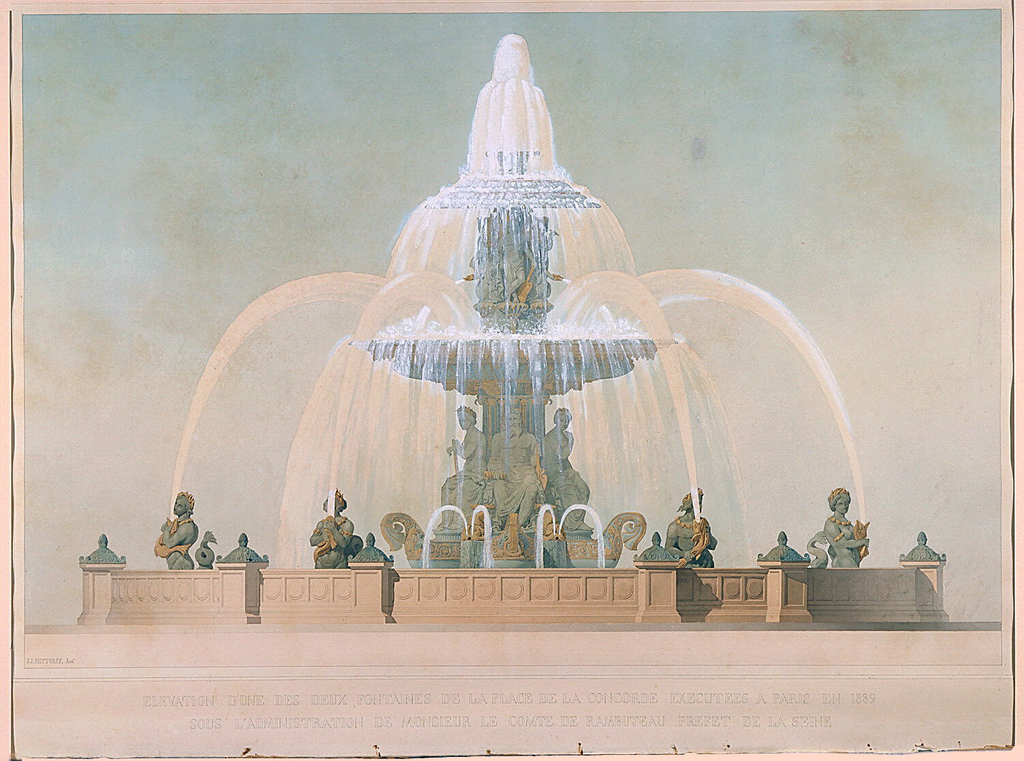 This splendid presentation drawing was prepared for the prestigious civic commission to redesign the Place de la Concorde, one of the great public squares of Paris. When the viceroy of Egypt, Muḥammad ʿAlī, offered France an obelisk from the reign of Ramses II as a gift in 1831, the German-born designer Jakob Ignaz Hittorff was asked to plan a square with two fountains to frame the ancient monument. The design was modeled after the plaza in front of St. Peter’s in Rome, which Hittorff had seen during his travels to Italy in the early 1820s. Construction began in 1836 and the fountains and their plumbing systems were complete in 1840.

The square’s iconography celebrates French triumphs in industry, commerce and engineering. This political subtext was conceived by Le Comte de Rambuteau, a major figure in organizing the Parisian infrastructure and water supply systems. This drawing, dedicated to Rambuteau, shows an elevation of the Maritime fountain, located closest to the river Seine. Allegorical figures representing the Atlantic and Mediterranean oceans are joined by a host of aquatic fauna. The drawing was executed under Hittorff’s direction by another artist in his workshop.

The Place de la Concorde is centrally located with strategic axial relationships to four buildings, each respectively representing the French monarchy, church, military, and state. To the east, the Tuileries Gardens symbolize royal power; to the north is the church of the Madeleine; to the west is the Champs-Élysées leading to the Arc de Triomphe, a monument glorifying Napoleonic military victory;  to the South, across the river Seine,  is the Palais Bourbon and the site of the French parliament’s National Assembly. The square is most famous for being named the Place de la Révolution from 1789 to 1795, when it hosted the beheading of thousands of individuals by the guillotine.

← City Blocks
A Place for Everything →