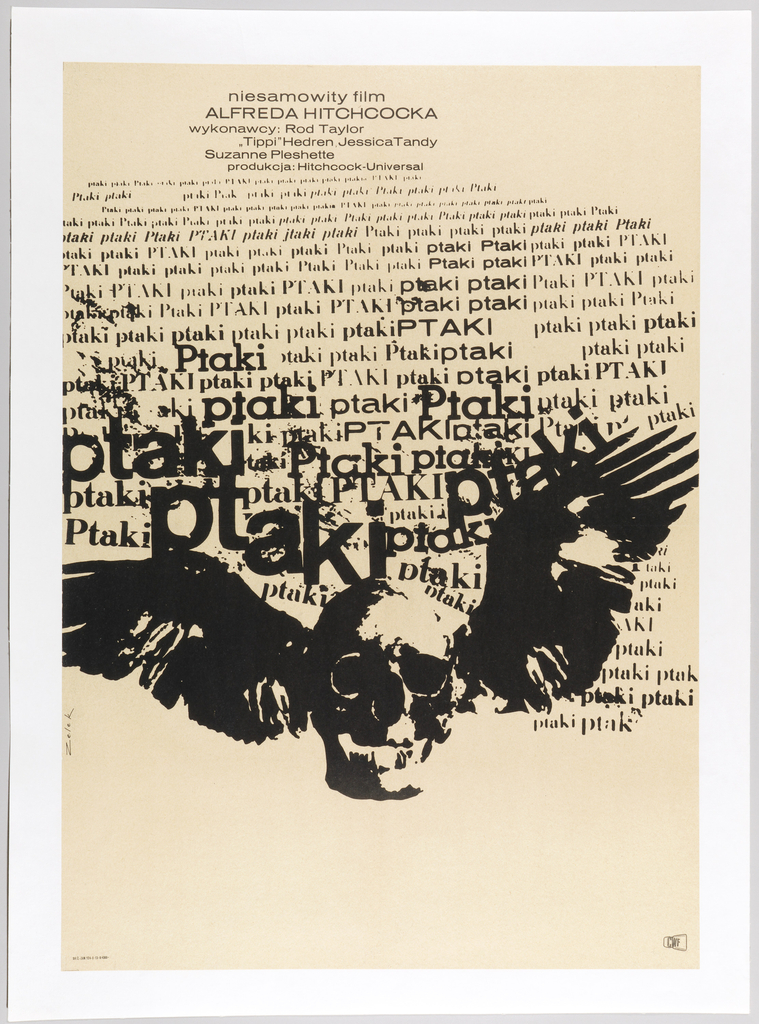 Constraints are often said to offer the best conditions for creativity. During the communist era, Polish graphics flourished. Due to the lack of external influences, poster designers needed to create their own isolated yet diverse visual language.[1] Cut off from Western iconography, these creatives were tasked with advertising the few American films that penetrated the Iron Curtain. A maverick even among his peers, Bronisław Zełek (1935-) spent the 1960’s developing a typographic method all his own. Whereas many of his peers worked in a painterly style with loose, gestural graphics, he employed sparse, minimal planes of overlaid text and imagery.[2] Such an approach emphasized bold lettering. Singular words were transformed into formal symbols, proportioned to express emotion over message.[3]

Zełek worked in graphic design from 1961-73, before emigrating to Austria. He has only a few film and music posters to his name, but his iconic poster for Alfred Hitchock’s The Birds left an undeniable mark on Polish visual culture. Announcing the release of Hitchcock’s seminal film at the Warsaw Biennale in 1968, this design, where flocks of the word ptaki (Polish for “birds”) stand in for actual birds, best exemplifies Zelek’s bold, typographic approach. “The ominous flapping of letters and mishmash of various fonts [in the Birds poster] engages the viewer with its synesthesia,” Sylwia Gižka explained at Culture.pl. “The empty wide field in the lower part of the composition enhances the effect of an emerging threat, as it is obvious that it will be inevitably filled with oncoming black wings.”[4] Icon Magazine’s Andrea Marks echoed this description in a recent review: “The disturbing content of the film is not given a literal representation, yet an unsettling feeling is still communicated through abstract imagery.”[5] The collage of manually-stenciled words approaching a singular skull-and-wing figure reveals the emblematic power of typography. “Letters have haunted me all my life, by chance, I don’t really know why,” Zełek recently told design journalist Marian Misiak.[6] Perhaps the physical treatment of such terrifying themes might explain this anxiety.

← A Revival Revived
A Touch of Glass →