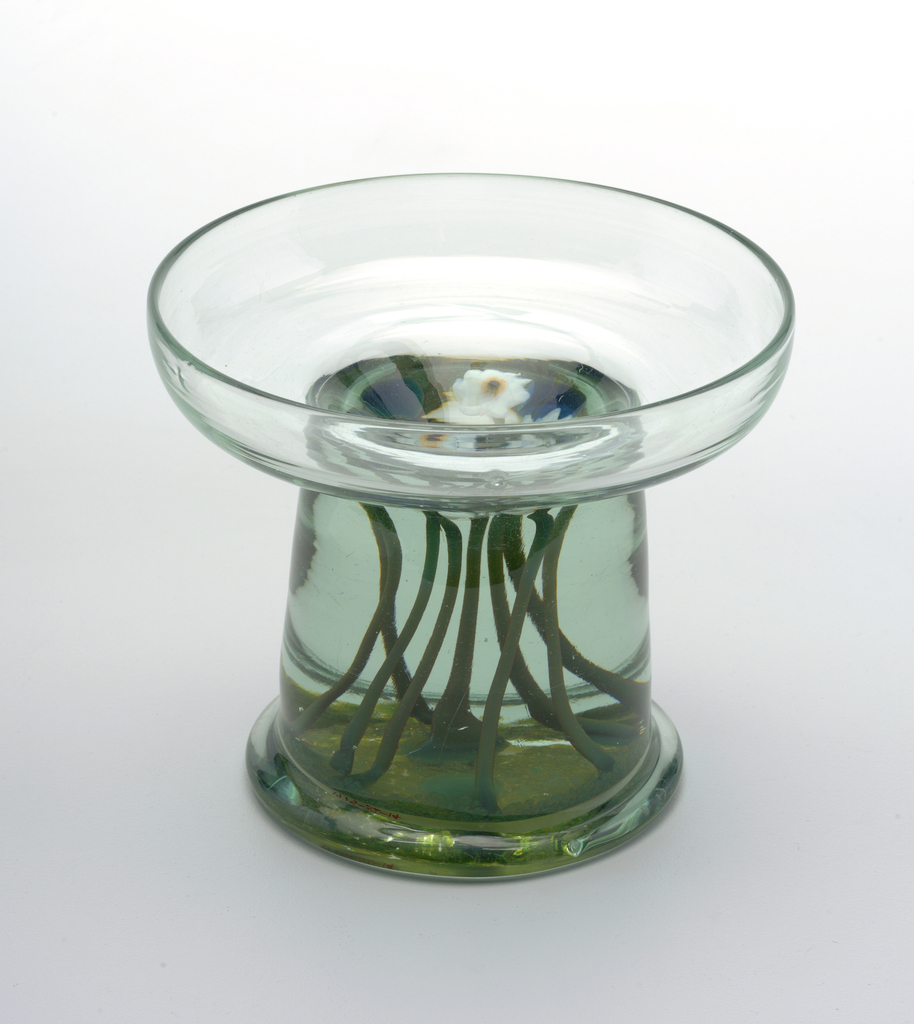 In July of 1913, Arthur Sanders, a gaffer at Tiffany Studios, was sent on a dream of a business trip. He traveled to Hamilton, Bermuda to study marine life through a glass-bottomed boat. Sanders observed the beauty of the underwater world so that he could later reproduce it in glass when back in Corona, New York in the studio. His trip resulted in a series of Aquamarine glass pieces in two patterns, one that featured water lilies, seen in this footed bowl, and another that featured fish, nets, and seaweed. These vessels were particularly difficult to produce and therefore surviving examples are rare. First, the decoration, in this case water lilies, were lampworked, whereby rods of glass were heated by a flame to form the desired organic shapes. Then the lilies were encased in a heavy mass of blue-green glass gathered at the base that lent a life-like underwater effect and a sense of depth. An article on this series in American Homes and Gardens (December 1913) described, “An example of this glass often weighing twenty-five pounds is manipulated by the glass worker at the end of a five-foot blow-iron or ‘pontil,’and takes several hours to evolve.” [1] The depression at the top of the vessel gives the impression of the vase being filled with water while the white blossoms float along the surface. Due to the complexity of this technique involving up to five types of glass and multiple firings, many pieces were lost in the annealing process as the glass could react unpredictably as it cooled. This vase exemplifies how Tiffany Studios achieved an ideal combination of technical and artistic proficiency in order to produce a beautifully true to life portrayal of nature inspired by the source itself.

This footed bowl is currently on view in  Passion for the Exotic: Louis Comfort Tiffany and Lockwood de Forest.

← Crewel Cap
Your Own Little Sunrise →