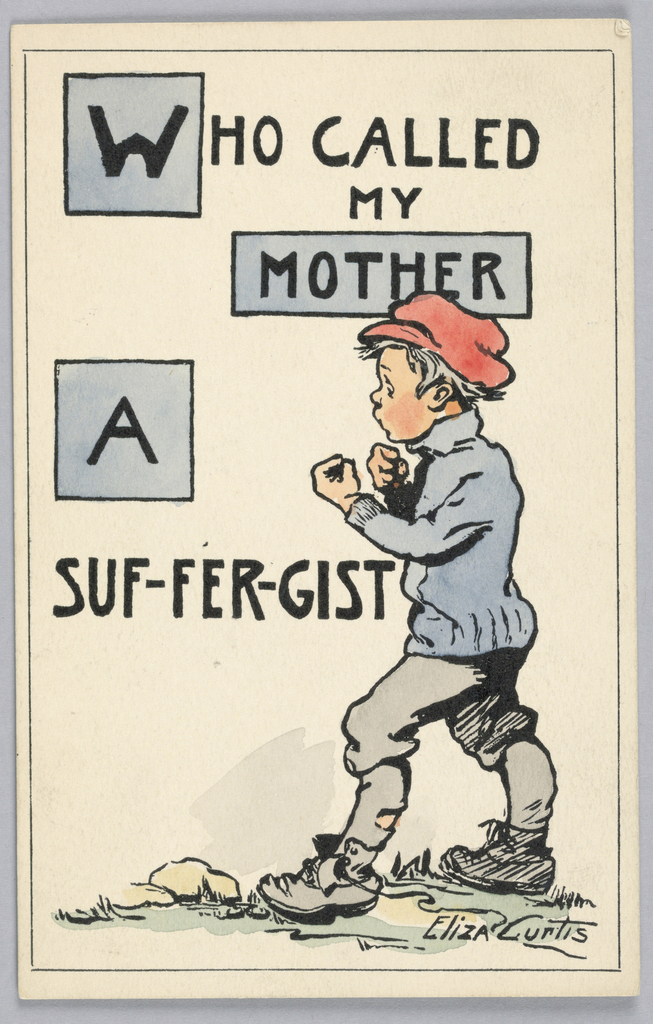 While today, we take the idea of universal suffrage for granted, the right to vote in the United States has a long and complex history that continues to this day. The women’s suffrage movement officially began in Seneca Falls in 1848 and, after a long, hard-fought campaign, culminated with the ratification of the 19th Amendment in 1920.[1] The amendment protects the rights of the citizens of the United States to vote on the basis of sex alone, and primarily granted white women the right to vote, as protection based on race was not established at this time, and would not be for several more decades. The years leading up to the 19th Amendment saw a great battle between suffragists and those who did not believe women should have the right to vote. This period in time is known as first-wave feminism.

One of the ways the suffrage movement faced discrimination was through cartoons and postcards that lashed out against women and suffragists. Post​cards were extremely popular during the early years of the 20th Century, when postage for postcards was very cheap. The so-called Golden Age of postcards lasted from around 1893-1918, during which time around 4,500 unique postcards about the suffrage movement were produced. While some of these postcards showed a pro-suffrage message, the vast majority were anti-suffrage and extremely sexist in nature.[2]

The belief that men and women belonged to “separate spheres” was an ideology that took root in the Victorian Era. It was extremely prevalent in the years leading up to the ratification to the 19th Amendment, and can even still be felt in today’s society. Men were thought to be best suited for the public sphere, which included politics and business. Women, on the other hand, were thought to be best suited for the private sphere of domestic life, homemaking and child-rearing. Suffragists were seen as invading the male sphere, causing many to see women’s suffrage as a movement that was threatening the accepted way of life.[3]

Many anti-suffrage postcards showed suffragists as either nagging wives or ugly old-maids. These women were pejoratively depicted as domineering and masculine, sometimes forcing men into domestic tasks.[4] Suffragists were depicted as being worse than the devil; mean, ugly, bitter women who were a danger to society.[5]

In other postcards, suffragists were depicted as children, with the intent to infantilize women who were fighting for their right to vote and thus, belittling their cause. Children were also utilized in these anti-suffrage postcards to depict innocence in this hot-topic discussion of voting rights. Children helped get the anti-suffrage message across in a palatable, inoffensive manner that was deemed appropriate for polite society.[6]

The postcard above has a young boy who is ready to defend his mother’s honor against those who would wrong her. Someone perhaps called his mother a suffragist, a term he may not know the meaning of, but instinctively knows, because of the culture he lives in, that it holds negative connotations and is an insulting thing to call a woman. This is perhaps not so far away from the term feminist in today’s society, as many today view that term as a negative, no matter what the term actually means.

Despite these anti-suffrage postcards, as well as the many other obstacles suffragists had to contend with during this time, the 19th Amendment was passed by Congress on June 4, 1919, and ratified on August 18, 1920.[7] While these dates are celebrated by many for granting universal suffrage in the United States, they did not mean the end to the fight for the right to vote, or for equality. The 19th Amendment, despite its shortcomings, was an extremely important addition to the constitution and a proud moment for suffragists, some of whom had dedicated their lives to the cause.

One thought on “Suffering Suffragists”