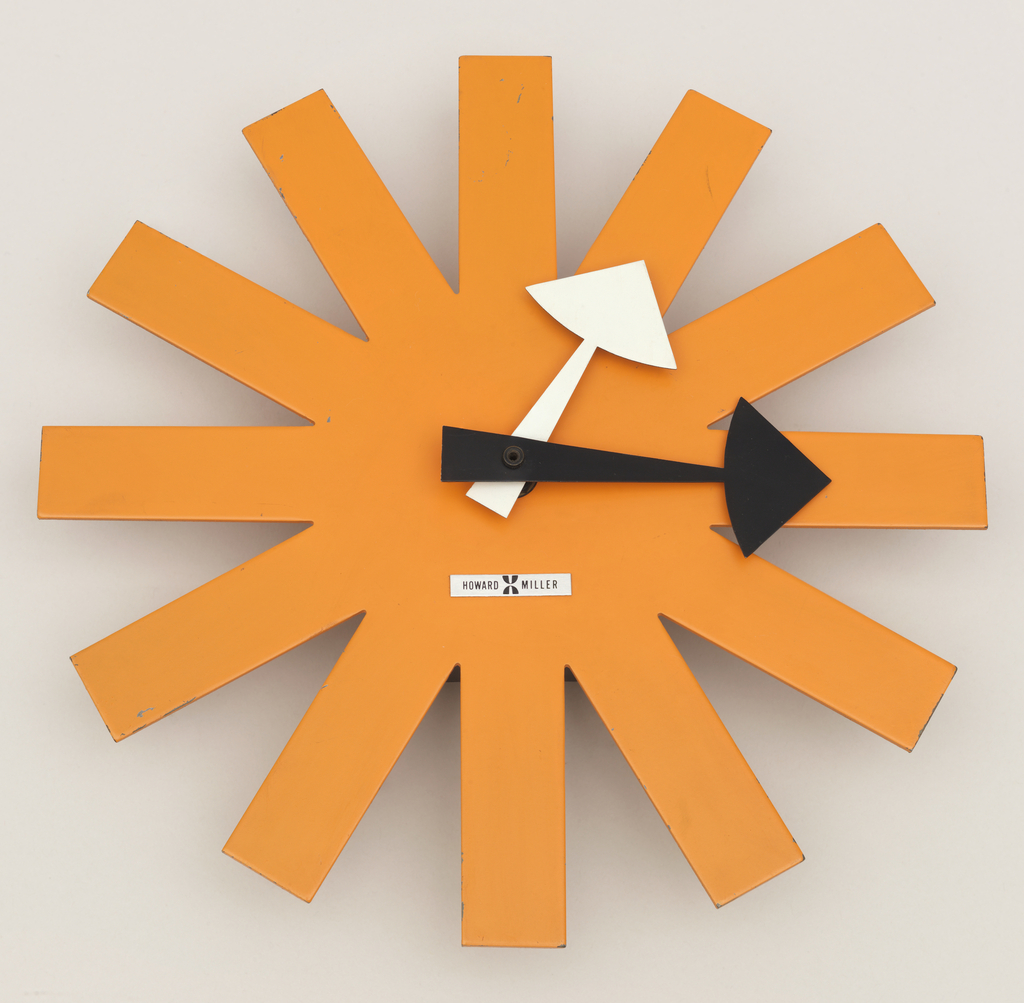 Posted by Catherine Acosta on February 23, 2016

George Nelson and his team at George Nelson Associates were the creative force behind many iconic mid-century furniture designs—such as the “Marshmallow” sofa and various storage systems—but it is in the company’s playful clock designs of the 1950s and 1960s that the whimsy of mid-century modern design excels. The Asterisk wall clock’s simple design relates to its predecessors at the Howard Miller Clock Company (1), such as the Ball Clock (designed by Irving Harper in 1949) and Gilbert Rohde’s 4083A Clock (designed shortly before its display at the 1933 Chicago World’s Fair). With its reductive design the Asterisk is a variation of the popular sunburst motif used in many of the company’s designs—most notably the Sunburst wall clock (#2202) designed in the early 1950s.

In addition to Nelson, others at George Nelson Associates, such as Irving Harper and Lucia DeRespini, were responsible for many of the company’s abstract sculptural clocks. By the late 1950s and early 1960s, the designers also began using unconventional materials for their designs, such as bent plywood, which was used for the Sunflower clock (#2261). In all of the company’s clock designs one recognizes each designer’s imaginativeness and total disregard of conventional shapes and forms, as can be seen in the overall shape of the Asterisk and its misaligned hands.

The Asterisk’s bold orange face remained popular, not surprisingly, given its similarity to the colorful futuristic interiors and asymmetrical shapes later seen in Hannah-Barbera’s original run of “The Jetsons” (1962–1963). The Asterisk shares a cartoon-like appearance with several other clocks designed by George Nelson Associates, most notably Irving Harper’s China clocks and Ceramic clocks from the early 1950s—all of which might easily bring to mind the Jetsons’ robotic maid, Rosie. Harper’s designs don’t stray far from those used in his paper sculptures, and among all of his designs and art, his creative ingenuity and vision are never lost.

Luckily for us today, our fascination with mid-century modern design hasn’t gone away, and official reproductions of George Nelson Associates’ iconic clocks can still be purchased and displayed in our homes.

← Freedom of the Seas
Suffering Suffragists →

One thought on “It’s Time”

“Gift of Mel Byars” to be added to description