Having your vegetables and eating them too 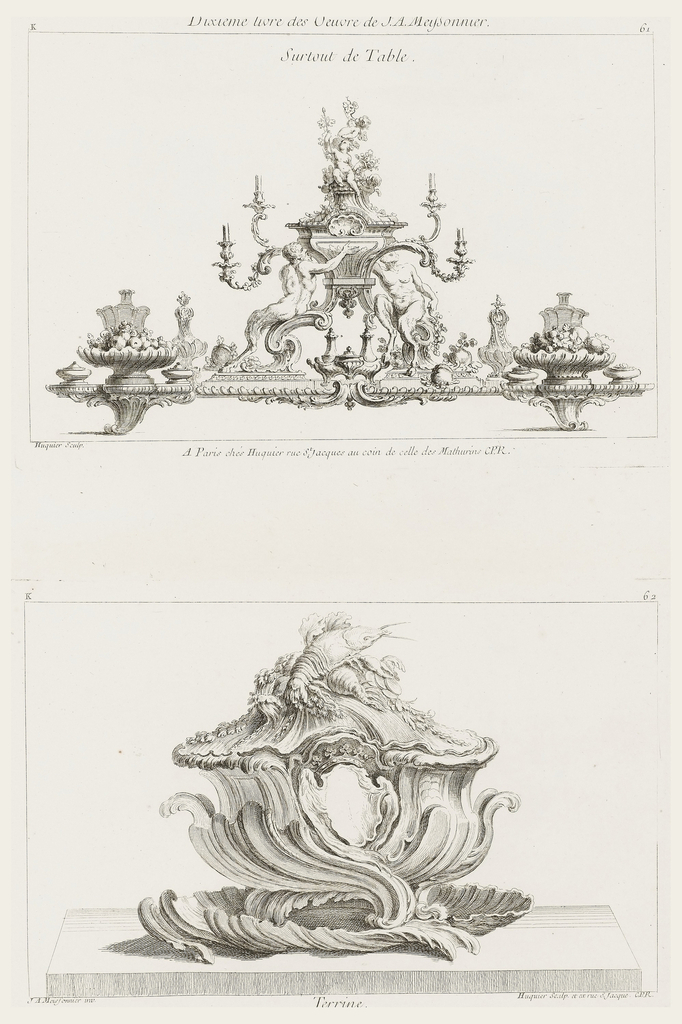 The famous silver tureens that the eighteenth–century silversmith Juste-Aurèle Meissonnier designed for England’s Duke of Kingston may be the most celebrated objects of his career. They were etched in a double-page spread in Oeuvre de Juste-Aurele Meissonnier published by Gabriel Huquier around 1748. This volume is one of the rare books acquired by the Cooper Hewitt Museum for the Arts of Decoration (now Cooper Hewitt, Smithsonian Design Museum) from the collection of Jean-Léon Decloux.

These silver masterpieces for the serving of a stew known as “pot à oeuille” display a variety of shells, rocaille, vegetables, fowl, and fish, all modeled from nature.   Their dynamic composition has been eloquently analyzed by Peter Fuhring who compared the swirling design to a “boat tossed on the brim of a swelling wave, the ornaments on its lid loosely scattered as if by a storm.” [i]

Meissonnier also produced other tureen designs included in the Oeuvre publication. Among these is a covered tureen on stand whose body is composed of cabbage leaves appearing to grow upwards from a cabbage-leaved platter to surround an empty cartouche bearing a ducal crown. Similar to the Kingston model, this tureen’s cover is composed of fish and vegetables including a crayfish, a snail and oak leaves. While this design is a variation on the Kingston tureen, the body, leaves and cartouche are presented more symmetrically.   If this restrained design was produced as part of the working process for the Kingston commission, it may represent an earlier, rejected scheme for the idiosyncratic Duke.

Meissonnier’s second tureen design appears to have inspired the tureen depicted in a drawing by an unknown French designer in Cooper Hewitt’s collection at one time attributed to Thomas Germain. The body of up-curving leaves surrounding a central cartouche with cover of crayfish and vegetables follows Meissonnier’s second tureen design. The handles springing from the edge of the bowl may be slightly more functional than those of Meissonnier’s model but are less innovative.

The same Meissonnier tureen appears to have been a source for another pot à oille design shown in the lower half of a drawing in the Bibliothèque Nationale de France collection. The body of this tureen with its upward curving leaves follows Meissonnier’s example however instead of shellfish, the knop has a hunting dog sniffing/biting a dead goose and the plateau is raised in the middle rather than concave in form. While the sheet has no artist’ name, it clearly relates to designs by Jacques III Roëttiers included in another Decloux collection volume, Pierre Germain’s Elements de L’Orfèvrerie, Paris, 1748. The cover motif of dog and goose is also echoed in reverse in a red chalk drawing in the Bibliothèque Nationale de France attributed to Roëttiers.[iii] Though the two designs on the Bibliothèque Nationale sheet were undoubtedly conceived by Roëttiers, these fragile and feathery sketches, which seem to fly off the were probably drawn by Jacques Jean Pasquier who etched Roëttiers’ designs in a similar gossamer style in Germain’s l’Orfèvreie.

In any case, the two drawings on the Bibliothèque Nationale sheet remain concept sketches created to secure a commission while Meissonnier’s second robust and muscular tureen design was intended as instruction for professional modelers on how to replicate his designs in three dimensions. By employing a system of long, thin curvilinear strokes together with cross hatchings of varying densities, Huquier defined the plastic character of the leaves and suggested where the surface would receive a high polish and where the chiseling was to be left matte.

When studied together, these designs reveal Meissonnier’s influence among his contemporary silversmith designers following the publications of his designs in the first half of the eighteenth century.

← Ajiro Marquetry: No Cabinetmaker Required
Not a Gravy Boat →