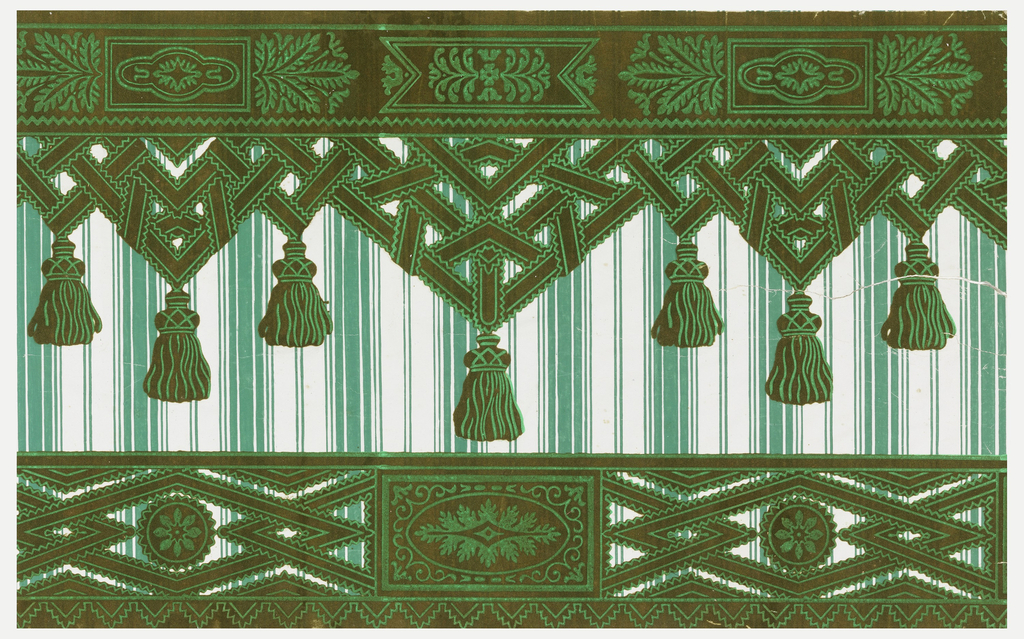 Posted by Jeffery McCullough on January 17, 2016

Elinor Merrill was the pre-eminent New York dealer of antique European textiles and wallcoverings. A specialist in French textiles, Merrill served as a consultant to the Metropolitan Museum of Art and to the Art Institute of Chicago. She also assisted in the development of the collections of the Cooper Hewitt and the Winterthur museums. After Merrill’s death in 1993, The Cooper Hewitt received several hundred items from her collection adding significant representations of and opportunities for the study of textiles and wallcoverings to the museum’s already robust holdings.

Included in the 1995 bequest from the estate of Elinor Merrill was a sophisticated and fanciful wallcovering consisting of a stripe pattern printed on a polished or satin ground with flocked top and bottom borders of a tessellated geometric design. The stripe has wavy and non-solid edges, a result of the trough printing production method, which was invented in 1843 and used for this wallcovering. Because of the heavily flocked top and bottom borders giving a three-dimensional effect and the non-regimented stripe of the sidewall, when installed in a room this wallcovering would give the feel of a tented room, draped in cotton with passementerie borders.

Percier and Fontaine, the architects entrusted with designing Malmaison for Napoleon Bonaparte and Empress Josephine ushered in the vogue for tented rooms of striped fabrics during the reign supreme of the Empire style. All classes of French people later accessioned the Empire style into their homes with the middle class having striped papers and simple borders and those who could afford to do so had more elaborate materials like flocking and stripes printed on cotton similar to the Merrill collection wallcovering.

As a complement to the dark wood furniture of the time period, the Empire style employed jewel tone colors in the decoration. In keeping with the use of the colors Percier and Fontaine deftly used at Malmaison, the emerald green stripes of the Merrill collection wallcovering encapsulated by the border’s deeper green and earth tones continues the style set during the Empire period. Because of its later production, the wallcovering in The Cooper Hewitt’s collection represents Second Empire style continued well beyond the reign of Napoleon Bonaparte.