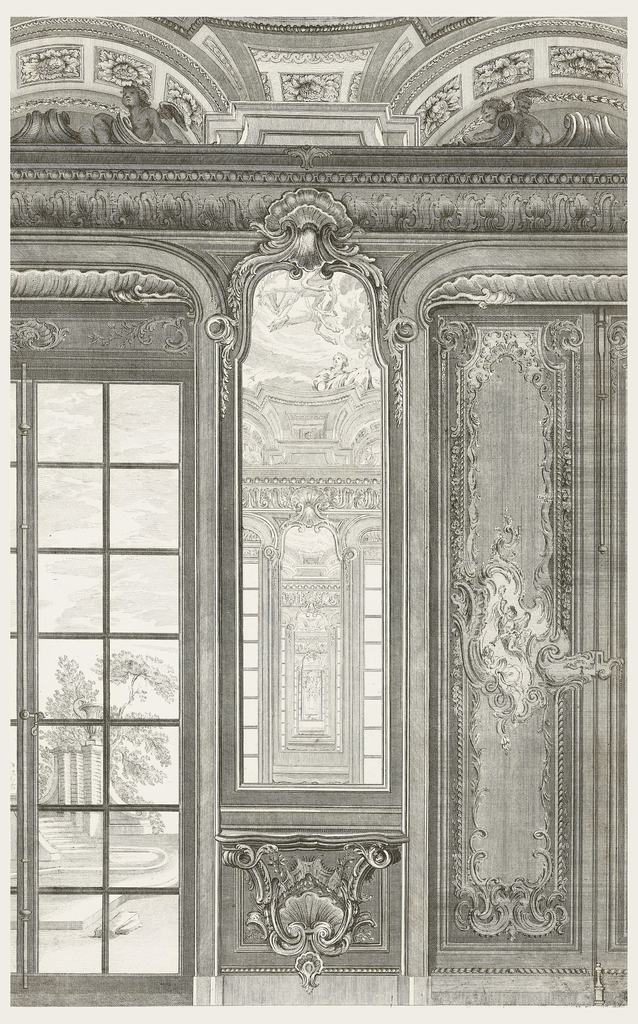 Mirrors were still a relatively expensive item during the eighteenth century, but they continued to grow in fashion as technical developments made it possible for larger and larger panes to be produced. They appealed to patrons for their ability to reproduce light in darks rooms and served more vain purposes as a signifier of one’s status and wealth. Soon, no interior was complete without them.

When mirrors were used successfully, not only did they lighten a room and the spirits of its inhabitants, but they had the ability to transform a room into an entirely new space. Messionnier’s design is a good example of how mirrors accomplished such a feat. By positioning mirrors directly across from each other, the owner increased the size of this room and his home by presenting a trompe l’oeil hallway, evoking the eternal quality of an enfilade, with an endless number of rooms to enter and explore. This effect is accomplished through the repetition of the adorning sculptural elements at the top of the mirror repeated as often as the mirrors themselves. Through these iterations of the interior the viewer is also given a hint of the room’s ceiling decoration, which is hidden in the main elevation.

It seems likely that Meissonnier’s design is exactly what the art critic La Font de Sainte-Yenne was referring to when he said,

“I must admit that the advantage of these mirrors, which are great, deserve in many respects the favour they have won with fashion. They pierce the walls and enlarge an apartment by adding a new one to it… How could a man […] help loving an embellishment that enlivens and enlightens him, and that fools his eyes without fooling him as to the real pleasure he receives.”[1]

de Sainte-Yenne articulated further why mirrors were important to eighteenth-century interiors; not only did they maintain and perpetuate the periods predominate symmetrical principle, but they forced an interaction between the space and its inhabitants – they elicited an emotional response and furthered contemplation. Though no one would have been fooled for long by the trompe l’oeil enfilade, the opposing mirrors required further inspection of all interiors elements to discern what was real and what was an illusion.