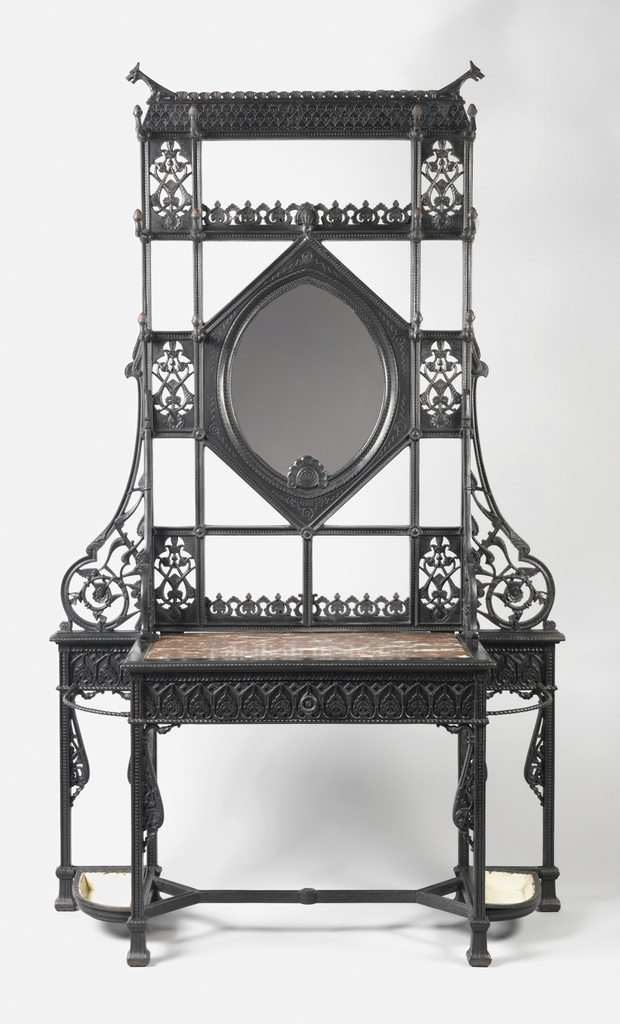 Posted by Catherine Acosta on December 20, 2015

The phantasmal world of Dr. Christopher Dresser’s ornamentation delights both the eye and the imagination. Dating from 1875, this iron hallstand features all the quintessential elements of Dr. Dresser’s highly stylized ornament. The “spikey” floral and figural motifs­­­­­­­­­­­—also recognizable in this illustration for two grotesque dado rails—and his angular interlaced arabesques are frequently used in his ornament. The cast iron scrollwork begins near the bottom of the hallstand’s simple legs, continuing upward toward its cornices, where two “spikey” mythical beasts rest. The hexagonal framed mirror is topped with the head of a turkey and at the bottom reads “Coalbrookdale.”

Manufactured by Coalbrookdale Co. located at the Coalbrookdale iron foundry at Ironbridge Gorge in Telford, Shropshire, just northwest of Birmingham, England, the hallstand is representative of decorative iron furnishings of the nineteenth century. Today Ironbridge Gorge is a UNESCO World Heritage site and is credited as the birthplace of the Industrial Revolution. Coalbrookdale Co. began successfully manufacturing domestic furnishings early in the nineteenth century, carrying through the mid-century, and presenting a stunning display at the Great Exhibition in 1851. Dr. Dresser’s designs for Coalbrookdale Co. happily wed the first industrial designer (as he is often credited) with the birthplace of industrial manufacturing.

Being partial to the machine, unlike Ruskin and Morris, Dr. Dresser created designs for wallpaper, ceramics, and furniture. His ornamental style is notable for being heavily influenced by Asian and Middle Eastern art. After visiting Japan in 1876-77, he took a keen interest in form over ornament but never completely abandoned his stylized and imaginative decoration. In 1868 Dr. Dresser turned his full attention to design and writing, after having pursued botany for several years. He had earned an honorary doctorate in botany from the University of Jena in 1859 that afforded him the doctoral title that he used throughout his career. [1] Dr. Dresser’s versatility foreshadows the industrial design profession of the twentieth century, and his designs—such as this toast rack designed in 1881—prefigure the modernist aesthetic in everyday household objects.