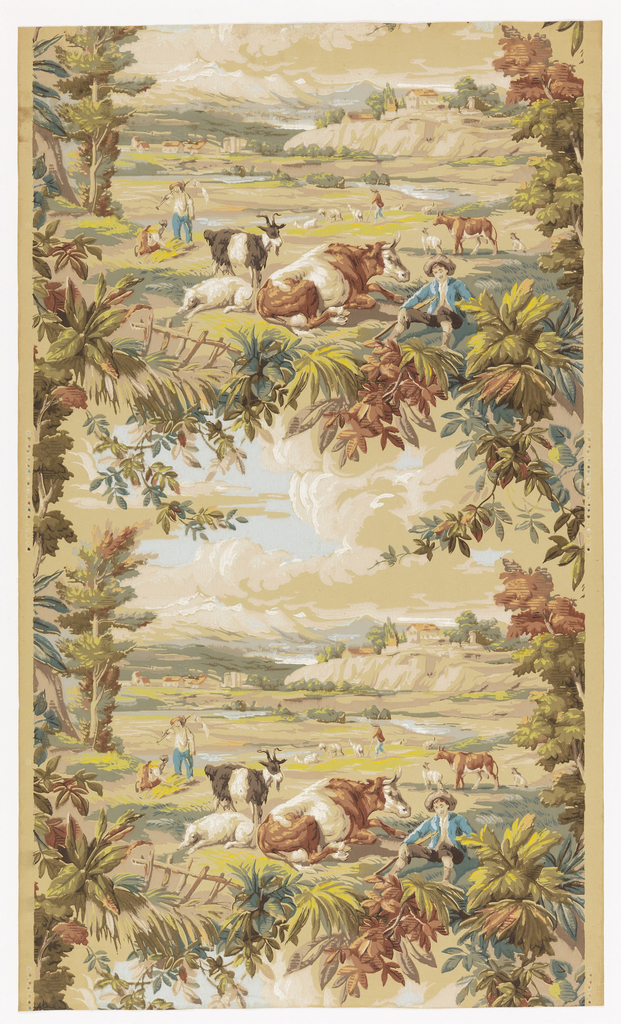 Posted by Emily Fitzgerald on December 19, 2015

This French sidewall is machine-printed on a neutral ground and depicts a pastoral scene framed by leaves and vines. This type of wallpaper, called a “landscape figure,” originated in France and was extremely popular during the early nineteenth century. These formulaic patterns were composed of rows of two or three repeating vignettes with pastoral or classical themes typically separated by foliage. This sidewall depicts a rural scene with a young man dressed in country clothes alongside a cow and goat in the foreground. The background is filled with rolling hills, farmers, more farm animals, houses, and greenery.

The green, blue, and brown leaves that surround the scene are lush and wild. Bright green pops from leaves and patches of farmland throughout the sidewall. Bright blue marks the farmers clothing and draws your eye into the background as well. The figures and landscape are represented in a painterly style, with gestural lines to mark shadows, tufts of fur, faces, and an overall sense of depth in the scene.

This idyllic scene draws from the classical tradition of Renaissance Italy, where scenery of the Roman countryside was used as a setting for history paintings. Depictions were naturalistic and detailed, as well as highly idealized and artfully contrived. This peaceful representation of country life and farming is an example of nature actively transformed into art. The farmers, animals, and landscape all coexist in leisure, with no sign of real labor. The appeal was to the rising bourgeoisie who desired readily comprehensible pictures of idyllic country scenes. Having both the pastoral scene on the walls of their home while they lived and worked in the city meant that they could enjoy the best of both worlds.

Emily FitzGerald is a master’s student in the Parsons-Cooper Hewitt History of Design and Curatorial Studies program, and is a Master’s Fellow in the Wallcoverings Department.