Flying into the World of Tomorrow 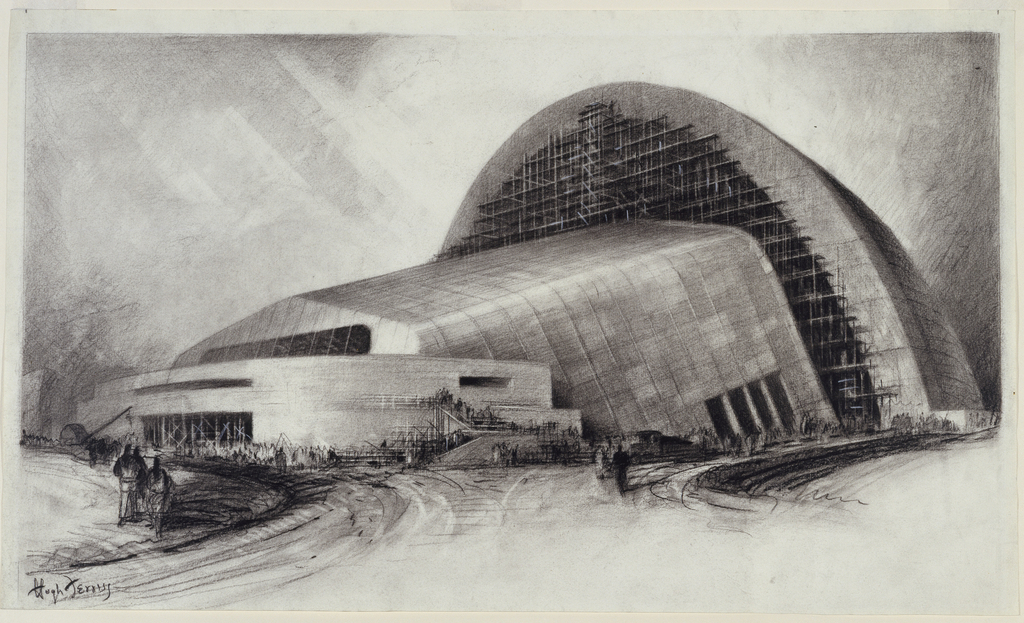 “Located on a larger tract of land in the transportation area, the aviation exhibit gives the visitor a realistic picture of a busy metropolitan airport. The dome-like rear portion holds  an invisibly suspended transport plane in full flight against a projected night sky.”[1]

Published in the 1939 New York World’s Fair brochure, this description and accompanying lithograph, seen below, help to situate the William Lescaze and J. Gordon Carr-designed Aviation Building in the context of the fair’s vast landscape. The drawing of the same pavilion, seen above, rendered by master draughtsman Hugh Ferriss, captures much of the streamlined, futuristic zeitgeist of the time, as the impending threat of World War II loomed large.[2] The pavilion sought to incorporate the architects’ concept of “flight in space” and celebrated the “Wings of America” through three themes: travel, defense, and private recreation.  The simulated “hanger under-construction” – consisting of a convex facade, centrally inclined body and domed rear – was one of the more “architecturally ambitious” pavilions that year but it failed to bring in large crowds, in part because other nearby car and boat presentations proved more attractive to visitors.[3] Inside, semi-life-size commercial planes were suspended from the roof and formed a landing pattern. Displays included contemporary aircraft cross-section cut-outs, with other segments that addressed comfort, economy, technology, and safety.[4]

Ferriss captured many of the event’s pavilions as part of the World’s Fair’s half-dozen-strong design team that worked throughout the late 1930’s to help visualize “the world of tomorrow” theme in drawings and other promotional material.[5] The master draughtsman’s dark, dramatic renderings were described by former Avery Library director Adolf Placzek as coming closer than any other of the century as capturing, “the power and compelling fascination of unlimited space.”[6]