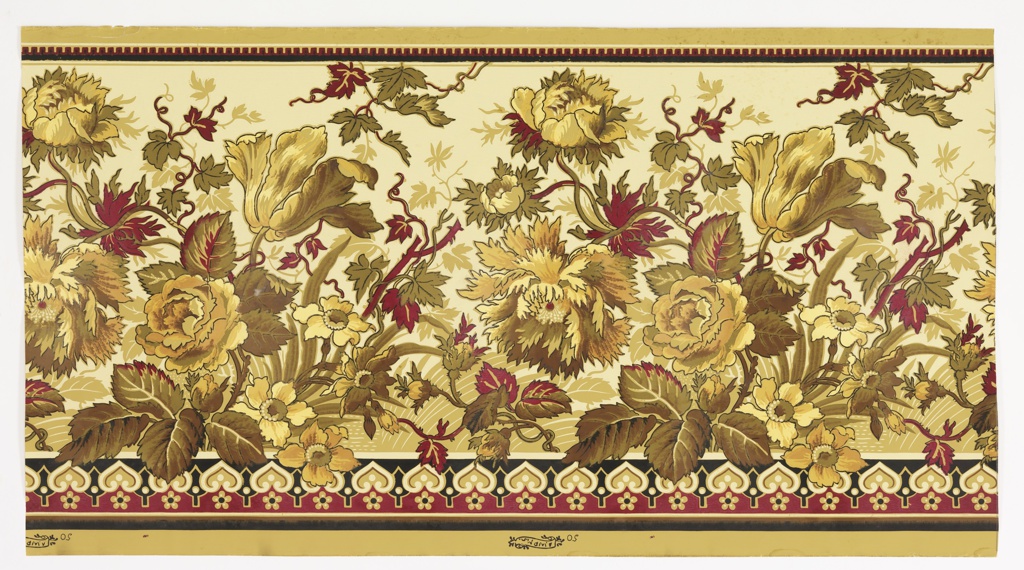 A rather severe group of peonies, roses and other flowers grow with grape vines in a tangled mass on this wallpaper frieze of the late-nineteenth century. Dark outlines and blocky coloring causes the blossoms to appear stylized and two-dimensional. Instead of subtle shading, the illusion of depth is created by overlapping the floral elements. The colors chosen for the design are also unrealistic, and the natural pinks, whites and spring greens of these species have been disregarded in favor of ochre, brick and olive on a beige ground. The floral scene is fenced in by Moresque borders in matching colors. The earthy tones, references to Asian art and flat, conventionalized depictions of flora are hallmarks of the American Aesthetic style, which was quite the trend in interior decorating when this wallpaper was produced.

The frieze’s selvedge is stamped “AWPMA,” which is the mark of the American Wall Paper Manufacturer’s Association. They were active from 1879-1887, and operated as a price-fixing combine. The business sense of this was not necessarily appreciated by the purchasing public, who were frustrated by the many different industries that formed trusts in order to dictate prices. A snarky 1884 article in the Reading Eagle reveals the extent of these manufacturing combines, and mentions the AWPMA by name:

Sadly for the AWPMA, their ‘wallpaper monarchy’ was not to last, and they were dissolved by the United States government in 1887.

← Swift as an Arrow
Memories of Bauhaus →