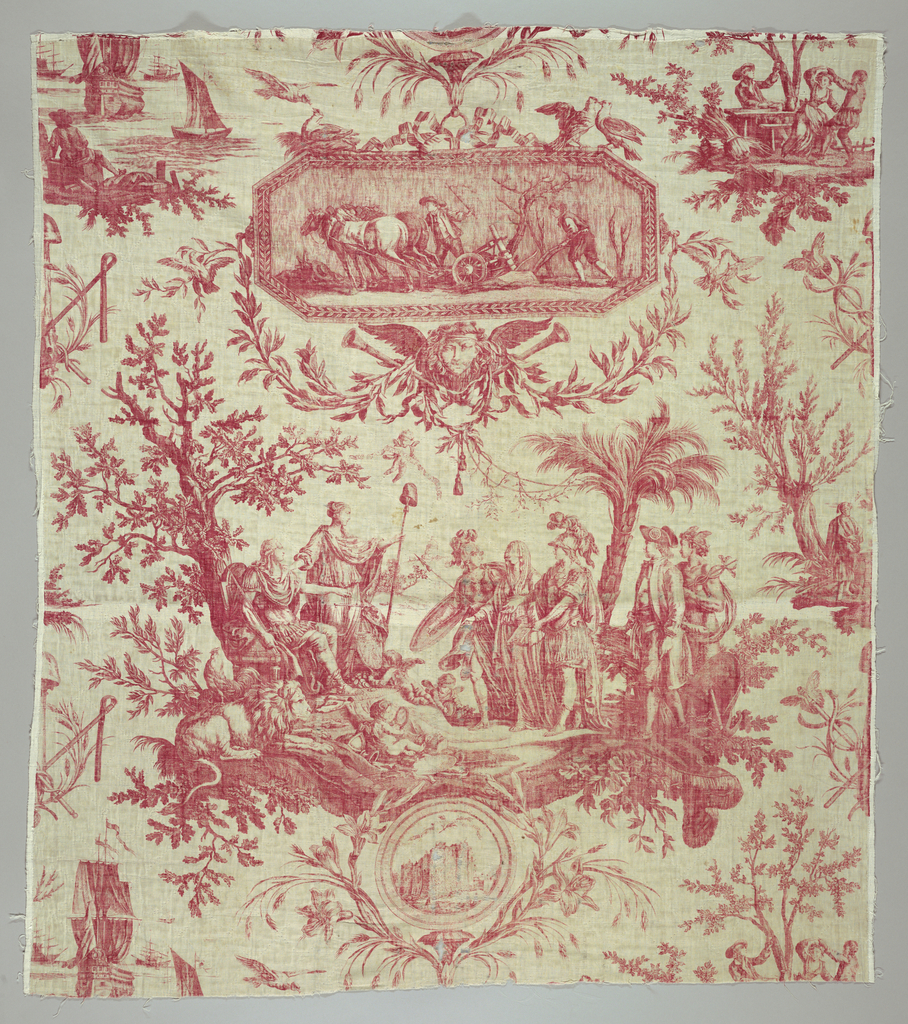 It is with the perfect vision of hindsight that we can perceive the dramatic irony embedded in this textile, printed at the heart of the French Revolution. The intended message is announced on a banderole held aloft by a putto: Louis XVI is the Restorer of Liberty, a title briefly bestowed on him by the French National Assembly. The ill-fated king is shown crownless and holding the sword and balanced scales of justice. He is presented by the allegorical figure of Liberty who holds a pike, the iconic revolutionary weapon that armed the National Guard, here topped with the phrygian cap symbolizing freedom. At the king’s feet, the French cock dominates the British lion. During this period, the cock, viewed as a proud and courageous animal, was frequently used as a patriotic emblem for the French people. In revolutionary imagery, the bird calls for the dawn of a new era. In 1791 and 1792, the cock appeared on a coin alongside Louis XVI, in lieu of the royal fleur-de-lys.

The newly drafted civil constitution is proffered by soldiers in antique dress and a young man wearing the citizen’s tricorn emblazoned with the tricolored cockade. There is no trace of Louis’ reluctance to accept the constitution. The figure of Hermes stands close by to broker negotiations. The demolition of the Bastille prison on July 14, 1789 is presented as if sanctioned by the King. An image of the ruined structure, after the painter Hubert Robert, is encircled by Bourbon lilies and wheat sheaves, symbolizing a productive nation fostered by the royal house. In this context, the fallen Bastille acts not as an icon of conquered despotism but as an allegory for positive political change. At this date, there was even a popular suggestion that a monument celebrating Louis XVI be erected on the site. Nearby, a cartouche encloses a calm agricultural scene; peasants merrily drink and dance, having completed the harvest; and merchant ships enter a port. All this amounts to a feeling of calm after the storm – a return to business as usual. Despite such overwrought imagery, Louis XVI lost his title as Restorer of Liberty, and lost his head to the guillotine on January 21, 1793.

This textile was produced at Jouy-en-Josas, west of Paris. Founded in 1760 by Christophe-Philippe Oberkampf, the Jouy factory had become a royal manufacturer in 1783 and four years later was awarded a patent of nobility by Louis XVI. In order to stimulate sales and appeal to capricious consumer taste, the factory drew on current events for the subjects of new designs. This pattern can be regarded as an attempt by Oberkampf to remain on good terms with both royalists and revolutionaries.

Lüsebrink, Hans-Jürgen, Rolf Reichardt, and Norbert Schürer. The Bastille: A History of a Symbol of Despotism and Freedom. Durham: Duke University Press, 1997.