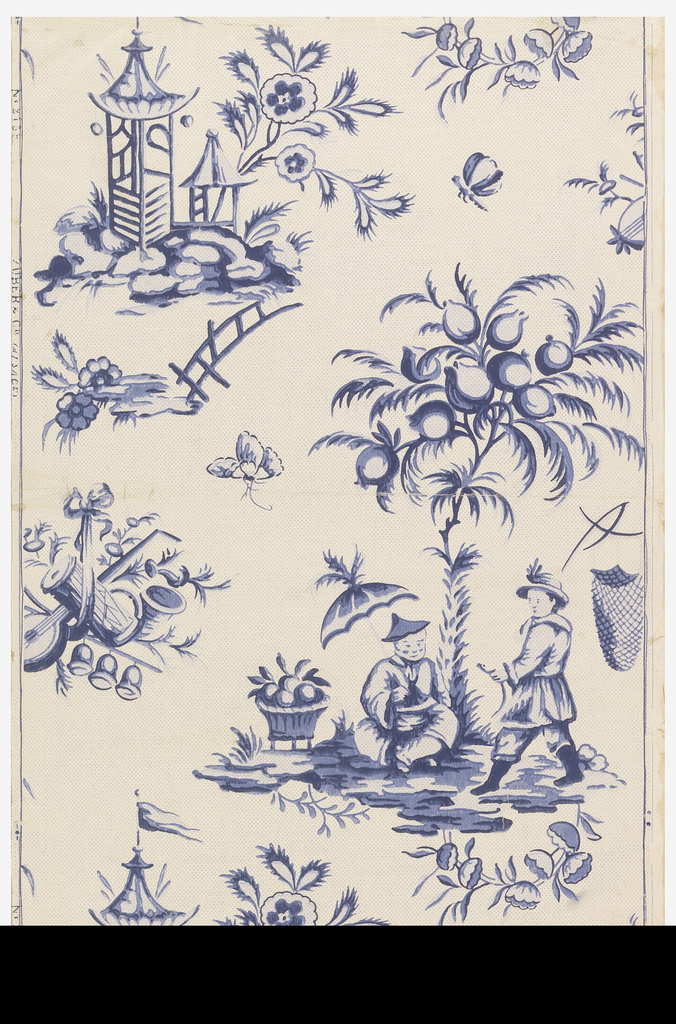 A pleasant Chinoiserie paper from the turn of the twentieth century. Machine-printed in two shades of blue, the focal point of the design features two chinoiserie figures under a fruit tree. One figure holds a net and a curved stick – presumably tools used to gather the tree’s bounty – and the other rests under a parasol next to a basket full of harvested fruits. The vignette repeats within a pattern of pagodas, stylized flowers, butterflies and bundles of instruments tied up in a bow. The images are rendered in a painterly manner atop a cream ground, an obvious reference to Chinese porcelains.

This sidewall was manufactured by Zuber et Cie, a French company in business since 1797 (and still in operation today!). By the time this particular design was manufactured, the company already had a long and successful history producing papers inspired by the art of China. In 1832 Zuber first printed a scenic paper known as Décor Chinois, which was a closer imitation of genuine Chinese wallpapers than usually seen from European manufacturers during the earlier part of the nineteenth century. A panel from the Décor Chinois series also resides in the Cooper Hewitt’s collections, and the pattern was produced by Zuber well into the twentieth century. Though both Chinese-inspired papers depict many of the same objects – flowers, insects, and trees – the latter paper reinterprets the earlier theme rather than recreating it. The easy brushstrokes and simple depictions are a far cry from the exactingly rendered palm fronds of the Chinois panels, presenting a tried-and-true theme in a fresh and current manner.