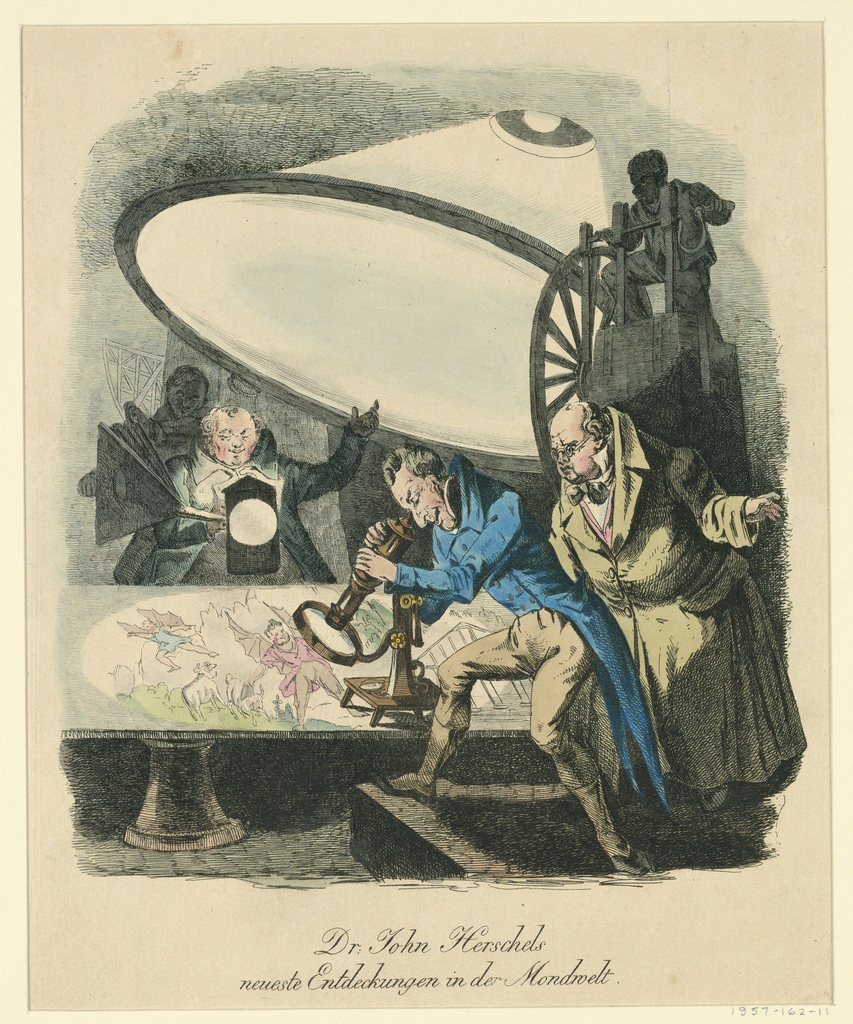 In August of 1835 a curious report made its way to the pages of a New York newspaper. A series of six articles entitled “Great Astronomical Discoveries Lately Made by Sir John Hershel… At the Cape of Good Hope [From Supplement to the Edinburgh Journal of Science]” were published in The Sun. Today, this event is known as the Great Moon Hoax of 1835. These articles described how a team of astronomers found clear and explicit evidence of life on the moon! According to the articles, this discovery was made thanks to the invention of an incredible new telescope that was able to clearly see, in great detail, the surface of the moon. This telescope was able to project images of the surface of the moon in real time upon a large wall or table so that it would be easily viewed by several people, as seen in the above image, captioned, “Dr. John Herschel’s latest discoveries in the lunar world”.

This six-part series of articles described this wondrous, and fictional, telescope, as well as the fantastical discoveries about the world found on the moon. These findings included​ a variety of land animals, birds, forests and rivers. Perhaps most notably, the final article described a civilization of humanoid creatures that had bat-like wings, as seen in the image above. The moon was described as an amazingly fertile and green world—a very different image of the moon than the one we know of now.

The content of these articles captured the imagination of many, and word of life on the moon quickly spread through the world during the weeks following its release. While there were those who took the articles as truth, there were others who questioned of the veracity of this news, and others who were firmly skeptical and did not take the articles as fact. Though the articles are clearly fictitious—and were intended as satire[1]–they do contain some truths, such as the inclusion of Sir John Hershel, who was a prominent astronomer of the time. The inclusion of these truths did perhaps make it easier for some to believe the articles and it took several weeks before the articles were definitively revealed as a hoax.

This depiction of life on the moon may remind you of Georges Méliès’ film, A Trip to the Moon (1901), or Jules Verne’s Journey Through the Impossible (1882). However, the Great Moon Hoax of 1835 predates both of these works by many decades, and perhaps served as inspiration for Méliès and Verne.