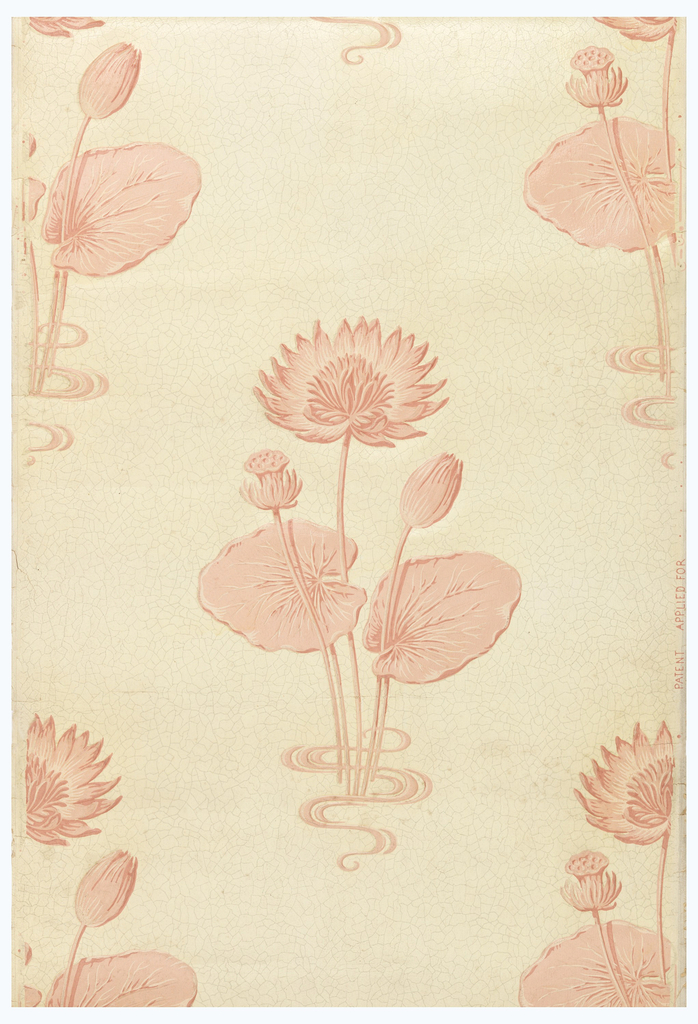 Dating c. 1900, this feminine French sidewall belongs to a class referred to as “bathroom” or “sanitary” wallpapers. This designation is based on a water-resistant varnish that coats the panel, making it safe to hang the paper near the tub, and possible to wash it with less risk of damage or bleeding colors. For the hygiene-conscious housewives of the late Victorian era, washable paper was a very welcome invention, practical for use in children’s bedrooms, kitchens or any other room where people may be prone to make a mess. “Patent Applied For” is printed on the selvedge of this panel, and actually refers to the design rather than the waterproofing technology. The designer, Harry Wearne, was successful in his application, and was issued a patent for his pattern on January 8th, 1901. The patent records a description of the design in the artist’s own words:

The leading feature of my design consists of the representation of an Egyptian waterlily, which appears to rise from the water. The minor features of the design consist in the spiral line at the base of the figure and the general arrangement of the figure, in which three flowering stems apparently arise between opposing leaves.

The lilies and their leaves are printed in four shades of coral on a cream ground, and are embossed to give the paper a bit of texture. Gray, craggy lines trace their way over background liked cracks on a sandy, dried-out lake bed, and give the impression that the lilies have sprung up from an oasis in the Egyptian desert. Wearne designed this paper for Zuber & Cie, a French manufactory that has been in business since the eighteenth-century.

To see Wearne’s original patent in its entirety, click here.

To learn more about sanitary papers in the Cooper Hewitt’s collection, click here.

← The Collector as Designer
Poppy Border: Decorative with no Side Effects →