Pushed Through A Screen 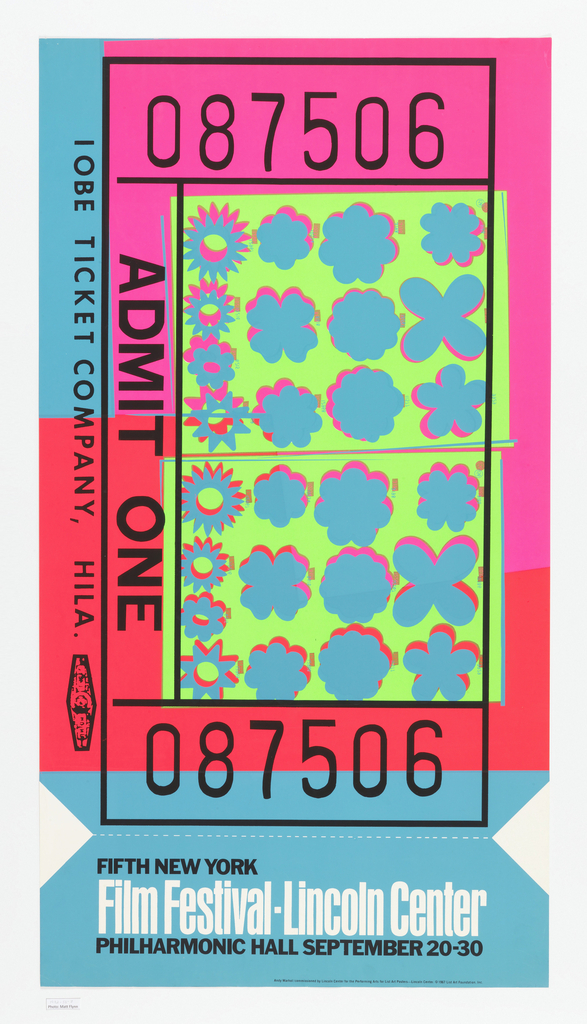 A screenprint is produced using a gauzy screen that has been stretched across a rectangular wooden frame. Ink is spread across the top portion of the screen by the printer, who then pulls the ink towards them with a rubber blade commonly known as a squeegee. The pressure forces the ink through the screen and onto the paper below. Parts of the screen are blocked with a stencil; ink passes through the open mesh to create the print. A different screen is used for each color. The design of the poster can be “applied” to the screen in a variety of ways, such as affixing a paper stencil directly to the screen or applying hardening glue. The most common, however, is the use of a special gelatin, enabling the screen to reproduce photographic imagery.

The printed surface of a screenprint differs dramatically from that of a lithograph. Lithography is a planographic technique, meaning the printed surface is flat. In screenprinting, ink is deposited in a thick layer that builds up on the paper’s surface. Screenprinting produces a rich impasto of ink that lends the poster a velvety presence, a quality that attracts it to many designers. Because it does not require an expensive press or a large amount of equipment, screenprinting has remained popular as a hands-on medium, more approachable to most designers than lithography or offset lithography.

Andy Warhol was introduced to screenprinting in the 1950s when he was working as a commercial artist, and it became the medium through which he produced his most celebrated canvases and works on paper. Until Warhol, screenprinting remained largely the purview of commercial printing, with the mark of the designer’s hand distinctly absent. An enthusiastic and experimental printmaker, Warhol created screenprints with constantly changing variables including mutable colors and shifts in registration. For his poster Admit One from 1967, Warhol mimicked the appearance of a movie ticket, printed on a massive scale over off-kilter layers of neon flowers. While perfectly registered, the poster carries the impression of a quickly assembled design. Though Warhol famously said he wanted “to be a machine,” he transformed the aesthetic of screenprinting into a medium that revealed and reveled in its own making. Poster, Oil and Water Do Not Mix, 2010. Designed by Anthony Burrill with Cecilia Azcarate Isturiz and Tom Galle for Happiness Brussels (Brussels, Belgium). Screenprint with oil culled from the Gulf of Mexico, sand, and extender base. Printed by Purple Monkey Design (New Orleans, Louisiana, USA). 76.2 × 50.8 cm (30 × 20 in.). Gift of Anthony Burrill, 2012-13-1.

That same spirit has carried through to our contemporary moment. In 2010, in the wake of the Deepwater Horizon oil spill, designer Anthony Burrill teamed up with Tom Galle and Cecilia Azcarate Isturiz of the communications agency Happiness Brussels to design a poster to raise money for recovery efforts. Isturiz and Galle flew to Louisiana to capture oil from the spill that had leeched into the sandy beaches of the coastline. The oil and sand was brought to the print shop Purple Monkey Design, where it was mixed with extender base, which allowed the oil-turned-ink to pass smoothly through a screen. When the oil was pushed through the screen onto the paper, it produced a shimmering, golden color that gives radiance to Burrill’s straightforward slogan of protest and warning: “Oil & Water Do Not Mix.”

← Quality and Quantity
Let’s Get Digital →

2 thoughts on “Pushed Through A Screen”

I have never really understood this process, but I’ve heard of a couple of my friends doing things like this. I recently had the idea to use this for a big project I’ve been working on, but I needed to gain a little more information. I appreciate the detailed description of how this works, this will really help me to know how to get the result that I’m looking for. Thank you for such a detailed article about this specific process! http://www.edgescreen.com/specialties.html

I am so pleased that you found this information helpful! You should also check out our Design Dictionary video series, which includes a short video on the screenprinting process. You can watch it here: https://youtu.be/AvLILr8H5Pg?list=PLqwPGOOIhKSDEqOg8OxfciHIMTfyJa9vu