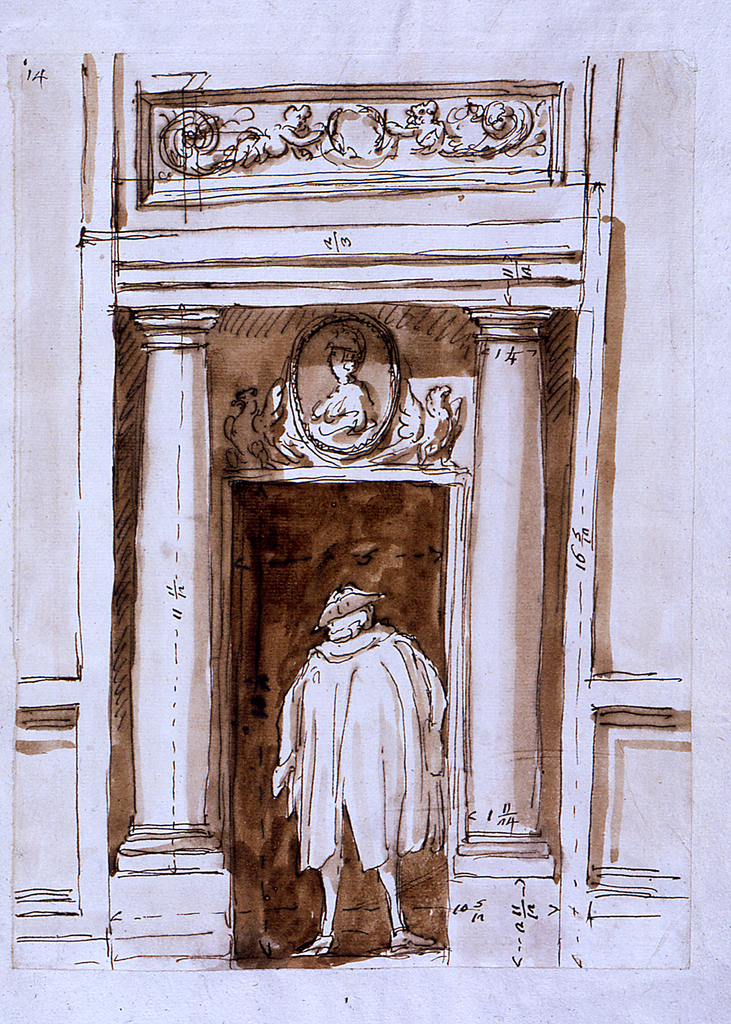 Does the artist behind this drawing simply intend to represent a doorway, or rather use this as an elaborate pretext in creating a portrait of a mysterious figure? Such a question will undoubtedly remain unanswered. Through a seemingly simple combination of architectural elements surrounding a male figure, Barberi conveys something distinctly atmospheric.

With cloak thrown over the left shoulder, as though he were guarding the entrance of a private residence, or perhaps getting ready to leave, the male figure in the center remains poised, as if he were watching us at a distance. Feet apart, with face hidden beneath bundles of clothing and a hat, we are unsure whether to laugh or feel intimidated[1]. An irregular wash of dark brown ink detaches the figure from the background, whilst around him two raised tuscan columns drawn with entasis support an entablature, above it a neoclassical frieze showing two cherubs with curled acanthus tails, holding what appears to be a laurel wreath. Underneath, slightly overshadowed by the entablature, a proud female bust in a medallion framed by two eagles looks away, unperturbed. A few notations – dashed across the paper – give us brief insight into the architect’s mind at work, as he calculates the proportions of the various elements in his drawing. An intuitive use of chiaroscuro allows us to imagine the intensity of light and shadow upon the architectural surface, giving us a sense of what this doorway might look like in real life, bathed in afternoon sunlight.

Giuseppe Barberi had a tumultuous life, spent travelling back and forth between France and Italy. His work for the Roman Republic, created ex-nihilo after the invasion of Italy by the French at the end of the 18th century, ultimately forced him to seek refuge in France once this ephemeral political regime had crumbled[2]. Barberi’s drawings range from decorative themes for the refurbishment of stately residences to designs for sepulchral monuments. This drawing brings to mind others by Carlo Marchionni, also kept in the Cooper Hewitt collection, involving designs for doorcases of the Villa Albani[3]. Marchionni’s drawings also include human figures, so as to give a better sense of the proportions and bring the compositions to life, which Barberi, having worked alongside Marchionni, must undoubtedly have been inspired by.