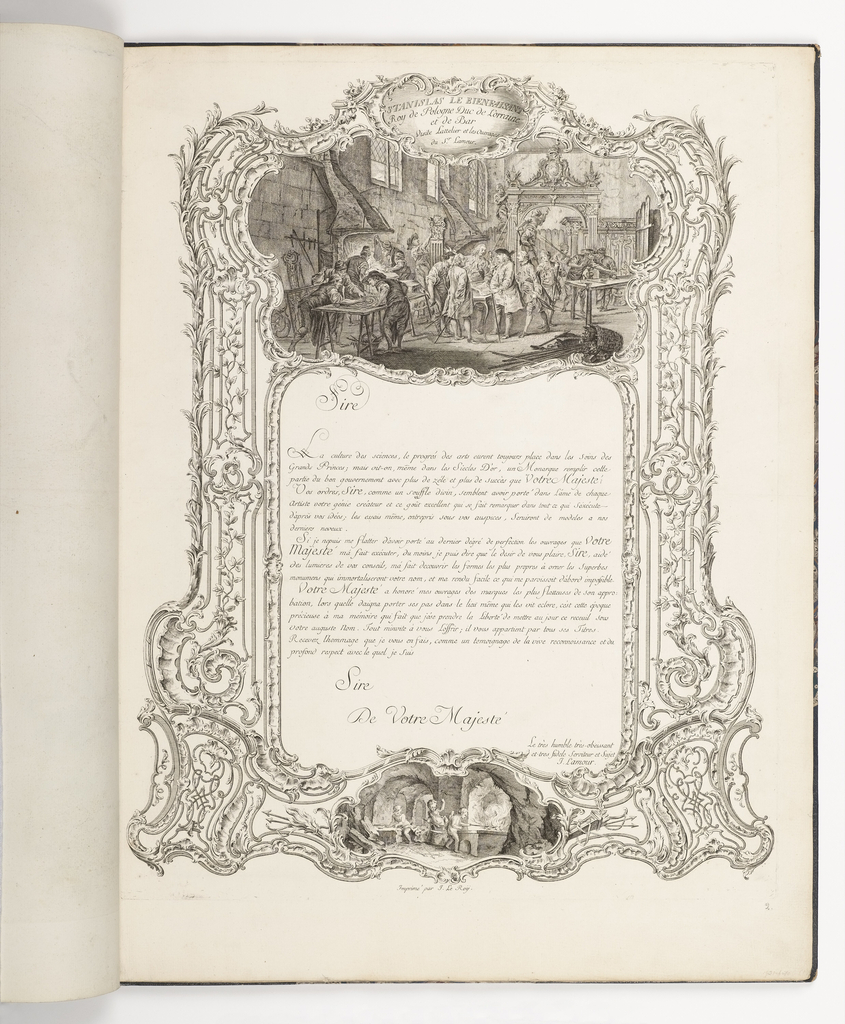 Dedication pages are as old as the history of publishing—if not older. However, it is rare that we see a dedication page featuring a scene such as the one illustrated here. This print is a dedication page from Recueil des ouvrages en serrurerie (1767), an album of engraving featuring metalwork designs by the French ironmonger, blacksmith, and master metalworker Jean Lamour (1698-1771). The Recueil features detailed views of the wrought-iron gates and railings that Lamour made for Place Stanislas and Hôtel de Ville (city hall) in Nancy, a city in northeast France. These were commissioned and funded by Stanislav I Leszczyński, the King of Poland (reg 1704–9), and the Duke of Lorrain and Bar, to whom the album is appropriately dedicated.

The main text features the usual panegyrics and praises to King Stanislav. Surrounding the text is an elaborate and delicate frame featuring all the characteristics of the rococo style such as organic motifs, flower trellises, robust leaves, and a profusion of escutcheons. Of particular interest is the vignette on top of the frame, which shows the interior of an ironmonger’s workshop. In the far left, a group of workmen trace out the c and the s-curves that Jean Lamour liberally applied throughout his designs. Behind them, workmen hammer away by the furnace. The center group features the protagonists of this scene and of the publication. The man wearing a black hat and wearing a jacket decorated with medals is King Stanislav. He converses with Jean Lamour, the figure to his left, who gestures at the drawings of his metalwork designs. To the right of the King is a man holding a money bag, indicating that the King not only came to inspect that status of his commissions, but also to reimburse Lamour. The man at the center with his back faced toward the viewer is likely Stanislas Emmanuel Heré, the first architect and superintendent of public buildings. By illustrating this scene on his dedication page, Lamour thus endows his album with additional prestige.

The gates depicted in the far background of the top vignette are of the monumental gates installed in the Place Stanislas at Nancy around 1755. The latter was engraved in detail in Lamour’s Recueil, and is still intact to this day.

Print, Design for the great gates in Place royale in Nancy, from 1755, by the order of The King of Poland, in Recueil des Ouvrages en Serrurerie, 1763; Designed by Jean Lamour, Etched by Dominique Collin; Engraving on heavy cream laid paper; Cooper Hewitt, Smithsonian Design Museum; Purchased for the Museum by the Advisory Council; Inv. no. 1921-6-210-3.

The dedication page emphasizes the extended role of Lamour’s patron, King Stnaislas in the afterlives of such commissions.  Ornamental books such as these were largely marketed toward fellow artisans and they not only helped the evolution and the dissemination of rococo style across the provinces of France and the European continent but also helped spread the influence of the respective aristocratic and royal patrons.

Cabelle Ahn is an MA fellow  in the Department of Drawings, Prints and Graphic Design at the Cooper Hewitt, Smithsonian Design Museum. She received her MA in Art History from the Courtauld Institute of Art and is currently studying eighteenth-century French works on paper at the Bard Graduate Center.

← A Stool of a Rare Architect
Poor’s Plate →