A Stool of a Rare Architect 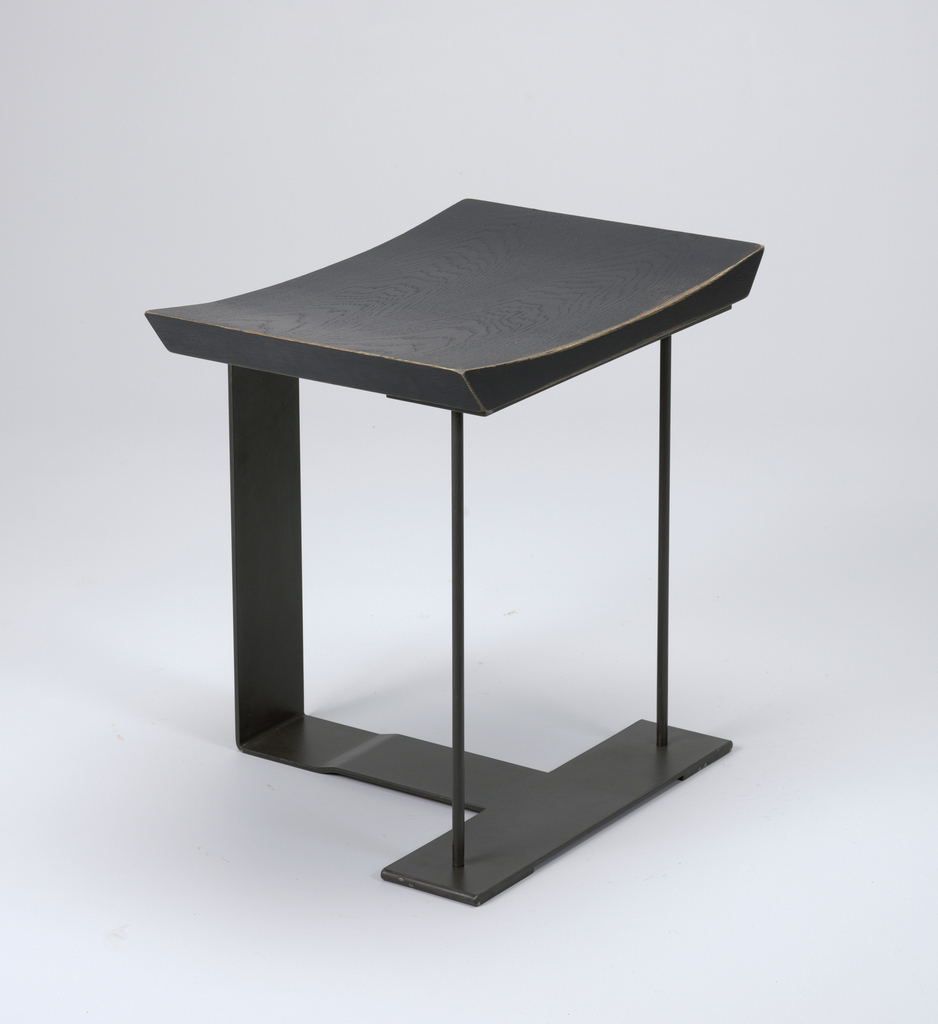 We can define as “rare” an artist whose work is hard to reach or to see, because there are only few creations that remain from him, and because the tracks that could explain most of them are lost. Trying to reach them becomes a true quest for the art lover. Pierre Chareau (1883-1950) was such a rare architect[1]. Very few of his architectural projects remain, but fortunately, we have more pieces of furniture in which his particular skills can be observed.

This stool illustrates a turning point in the production of Pierre Chareau, which comes around 1927, when he is designing wood and metal furniture. The most famous is a series of desks sharing the same characteristics: writing surfaces, lockers and wooden shelves encased in a metal floor support. The architects Robert Mallet-Stevens and Georges-Henri Pingusson both had those kinds of desks, made by their colleague, occasional collaborator, and friend. This stool came from the same original concept, with iron strips linked at the base by another pleated strip, and completed only with two thin tubular feet. Its production matches the moment when Chareau is working on the renovation of the interior design of the Grand Hôtel at Tours, accomplished in 1928. Several photographs by Thérèse Bonney show the bar and smoking lounge with similar stools.

The whole piece is harmonized by the black color, the metal patina corresponding to the lacquered mahogany. In other versions of the stool, made for private owners, Chareau has left the original color of the wood, to create a contrast between the iron base and the wooden seat. Here, he might have wanted to keep some unity of color making this stool as a particular element that can be moved easily to be integrated in a bigger structure, beside a corresponding wood and metal table, contrasting with a smooth leather armchair, on a light carpet, nearby a wooden wall.  It can work as a lonely seat or complete a set of furniture from that period.

The geometrical shape of the stool approaches a certain Japanese purity. Nevertheless, the only link between that design of seat to Japan is related to the technique employed for the metal structure: the hammer-wrought iron that characterizes all the Chareau production of wood and metal furniture around 1927. It was done in the workshop of his collaborator Louis Dalbet, an ironworker who has made possible the creation of such robust furniture with very thin strips of metal (just over 3/8 inch). The stool illustrates the use of flat sheet metal and angled bars, cut, bent and assembled in a way that is almost invisible; like all the furniture made with Dalbet at this time, it is possible through the use of screws, and more rarely through the soldering, which would be ground and hammered over so to stay almost imperceptible.

The rough quality of the unpolished steel, reinforced through the black paint instead of chrome or nickel electrolysis, distinguishes Chareau particularly from the other designers who begin at the same time to use tubular and chromed metal stands, although he was able to do the same on a few other pieces of furniture.

Here the very simple metallic base conveys an aerial atmosphere. As in many of Chareau’s works, the geometrical shape has sometimes been related to cubism, of which he was an early collector. It is also known that he owned the second painting sold by Mondrian in France. Pierre Chareau is considered of a true participant of the Parisian modern avant-garde. Among the numerous active architects and designers who made Paris so flourishing in the field of interior decoration in the mid-twenties, Chareau is one of the most remarkable, through his very particular style and the specific combination of industrialized material into a handcrafted production. In 1928, he is just about to start his masterpiece, the Maison de Verre, a striking house all of glass and metal built and designed for his friends and collectors, Annie and Jean Dalsace.

As a product of craftsmanship and small-scale production, through its pure simplicity and modest elegant lines, this stool is a good illustration of Chareau’s production as he designed most of his creations for a little circle of clients, related to each other and fond of what is just going to become the Modern Movement.

Hélène Leroy is a French trainee-curator from the Institut National du Patrimoine, currently an intern in the Product Design and Decorative Arts Department. She has a Masters in the History of Art and Museology from the École du Louvre, and a Masters in French Literature from the University Paris IV-Sorbonne.

← A Fan of the Directoire Period
A Royal Visit →

One thought on “A Stool of a Rare Architect”

Nice article about an interesting man