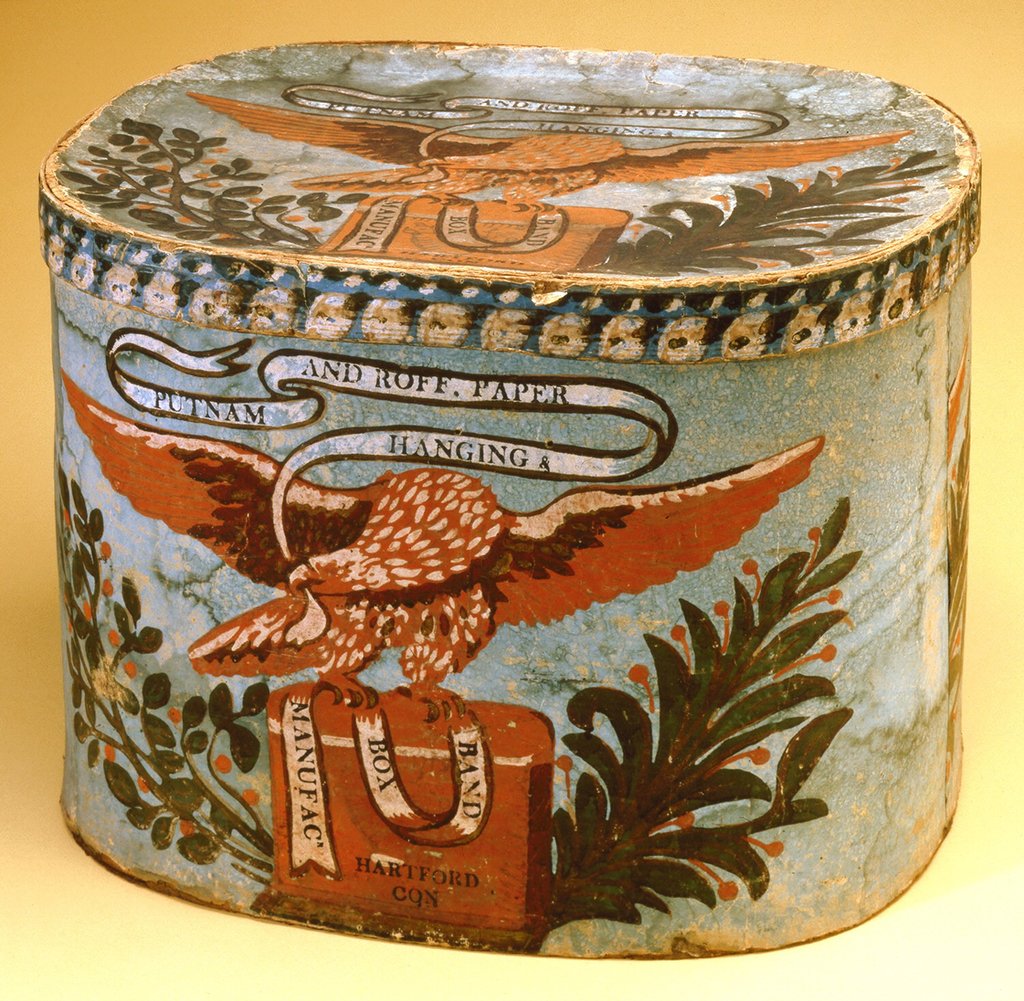 Bandboxes, rendered completely obsolete in today’s world of attached collars, were once a necessary possession for any man who liked to wear shirts. This patriotic example dates c. 1821- 1824, and it has lived within the collections of the Cooper Hewitt and its predecessors since 1913. The box is constructed of pasteboard covered in block-printed paper. Repeating around the sides of the box, and again on the cover, is a proud eagle perched upon a pedestal and framed in dark-green laurels and bright red berries. The mighty bird’s outstretched wings are highlighted with plumage of white and chestnut, and in his beak and talons he clutches a fluttering banner, bearing the noble message “Putnam and Roff. Paper Hanging & Band Box Manufac.” The base of the pedestal further informs the reader that the operation is located in Hartford Connecticut. Bandboxes, aside from their intended purpose of storing gentleman’s collars, were used as a general carry-alls, and by advertising their company on these boxes, the manufacturers were sure to increase their brand-recognition.

Despite this forward-thinking advertising strategy, George Putnam and Amos B. Roff were only in the bandbox business for about four years before dissolving their partnership. Putnam died several years later, but Amos B. Roff went on to earn himself at least a small footnote in the annals of American history for his role in an 1837 riot in Alton, Illinois. On November 7th of that year, a pro-slavery mob attacked a warehouse containing a printing press belonging to Rev. Elijah Parish Lovejoy, who ran the abolitionist newspaper The Alton Observer. Amos B. Roff was among the men who attempted to defend the reverend and his property. Sadly, in the violence that resulted, the reverend was fatally shot, and the printing press destroyed, but the resulting trials were reported across the nation, the late Reverend Lovejoy hailed as a martyr, and his supporters, including Roff, celebrated as heroes of abolitionism and freedom of the press.