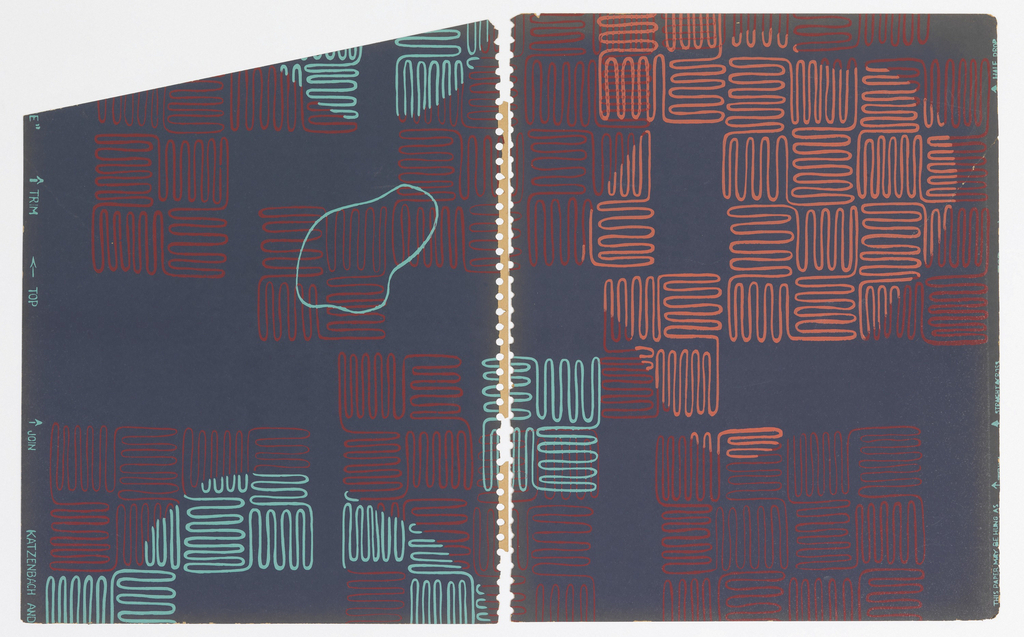 In Line, a wallpaper designed by prolific illustrator Ilonka Karasz, appears here as pages from a 1948 sample book, which originally contained the work of forty leading contemporary designers. Square blocks, each composed of a creatively arranged, continuous zigzag line, are stacked up like Tetris tiles on a dark-eggplant colored ground. The blocks are rendered mostly in red, with several grouping highlighted in coral and turquoise. A lone amoeba, outlined in turquoise, wanders across the pages. The design is rendered as a full, two page spread, bisected by the scar from its time spent in a spiral-bound book. The top left corner is clipped, and would originally have revealed the same design in a different color way (a version of which also lives at the Cooper Hewitt and is shown below).

Ms. Karasz emigrated to the United States from Hungary in 1913, settling in New York City. Though today she is remembered most for her iconic New Yorker cover illustrations, Ms. Karasz produced work in a wide variety of media, including textiles, ceramics, silver and (of course!) wallpaper. By the mid-twentieth century she had teamed up with New York wallpaper manufacturer Katzenbach and Warren and was producing a wide variety of contemporary designs (In Line being one of them). She tended towards two-dimensional designs, and meant for her wallpapers to garner an emotional response from the viewer [1]. Her far-reaching success is impressive in its own right, but becomes even more so when it is remembered that she built her career during a time when the world of industrial design was almost completely dominated by men.

← A Patriotic Chair
From Gray to Black →