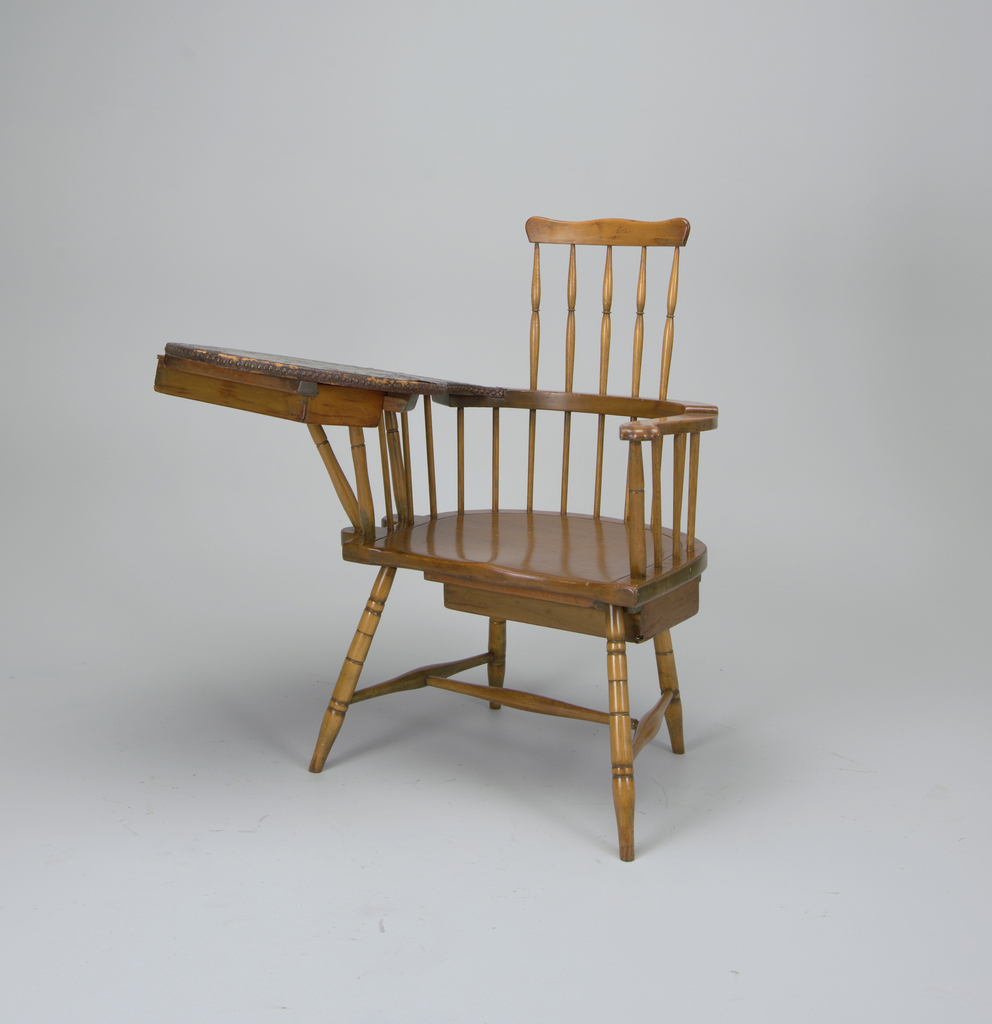 What did George Washington, Thomas Jefferson, General Knox, and Benjamin Franklin have in common? Windsor chairs. These chairs were first produced in England in the very first years of the 18th century. Although many folk tales surround the origin of the name (including some involving George III caught in a rain storm), it is likely that the name is derived from the fact that the first chairs of the type were made in the Thames Valley, near the town of Windsor, which acted as a distribution center to London and beyond. The first report of a Windsor chair in America was in the will of John Jones, a merchant of Philadelphia, who died in possession of a Windsor chair in 1708. That chair was likely British, as the first American Windsor chairs began being made in Philadelphia around 1725.

Designed with a light but strong frame, American Windsor chairs were known for being aesthetically pleasing, sturdy, and comfortable, which made them enduringly popular. Although they may have originally been intended for outdoor living (on the porch of Mount Vernon, for example), Americans found the Windsor chair to be as suited for the drawing room as for the garden, and appropriate for everyday life and historical occasions. A keen observer contemplating Robert Edge Pine’s painting “Congress Voting Independence” will notice that Robert Morris, Charles Carroll, and Benjamin Franklin are seated on Windsor chairs.

While the first specimens of the Windsor chair originated in Philadelphia, their production soon extended to Boston, New York, and New England, with regional variations being introduced in the design along the way. For example, full balustrade leg turnings began being replaced with bamboo leg turnings, and customers began being offered low-back, high-back, and comb-back chairs. This particular Windsor chair, with its five-spindle comb-back, is a rare surviving example of writing chairs, so-called because of the small oval writing table incorporated into the right arm of the chair, together with the drawers located underneath the writing table and underneath the seat, ensuring that writing materials would always be readily accessible. A writing chair such as this one might have been kept in a study or a quiet area of the drawing room in the fall and winter, so its owner might commit his musings to paper by the comfort of the fireplace, or placed on the covered porch in the summer, to welcome the inspiration of a garden breeze.

Catherine Powell is a graduate student in the History of Design and Curatorial Studies program at Parsons The New School for Design, and is a Fellow in the Product Design and Decorative Arts Department of the Cooper Hewitt Smithsonian Design Museum.

One thought on “A Patriotic Chair”

That’s a good article! Give us more of them miss!