Among the most important 20th-century architectural drawings in Cooper-Hewitt’s collection, this work presents four sketches for a suburban Paris two-family villa, commissioned by the modern art collectors, Michael and Sarah Stein (brother and sister-in-law of Gertrude Stein), and their close friend Gabrielle de Monzie. While De Monzie wasn’t especially interested in architecture, she still paid for Michael Stein’s experimental adventure in an avant-garde home. His pride in the house and in choosing Le Corbusier as the architect are articulated in a 1934 letter, in which he wrote: “After having been in the vanguard of the modern movement in painting in the early years of the century, we are now doing the same for modern architecture.”

The Steins first became aware of Le Corbusier at the celebrated 1925 Paris Exposition, where the architect presented his ideas for a totally new kind of mass housing unit in his Pavilion de l’Esprit Nouveau (Pavilion of the New Spirit). At that early point in his career, however, Le Corbusier was primarily occupied with designing private villas for well-to-do clients. The Villa Stein-de Monzie became his most lavish and expensive early project. Early films of the house can be viewed on The Metropolitan Museum of Art’s website.

Cooper-Hewitt is fortunate to have a series of seven studies and photographs of the villa (also known as “La Terraces” after the open terraces cut out of the cubic form). This process drawing shows schemes for the front and rear elevations of the house (top), and front and rear aerial perspective studies (bottom) of the villa. 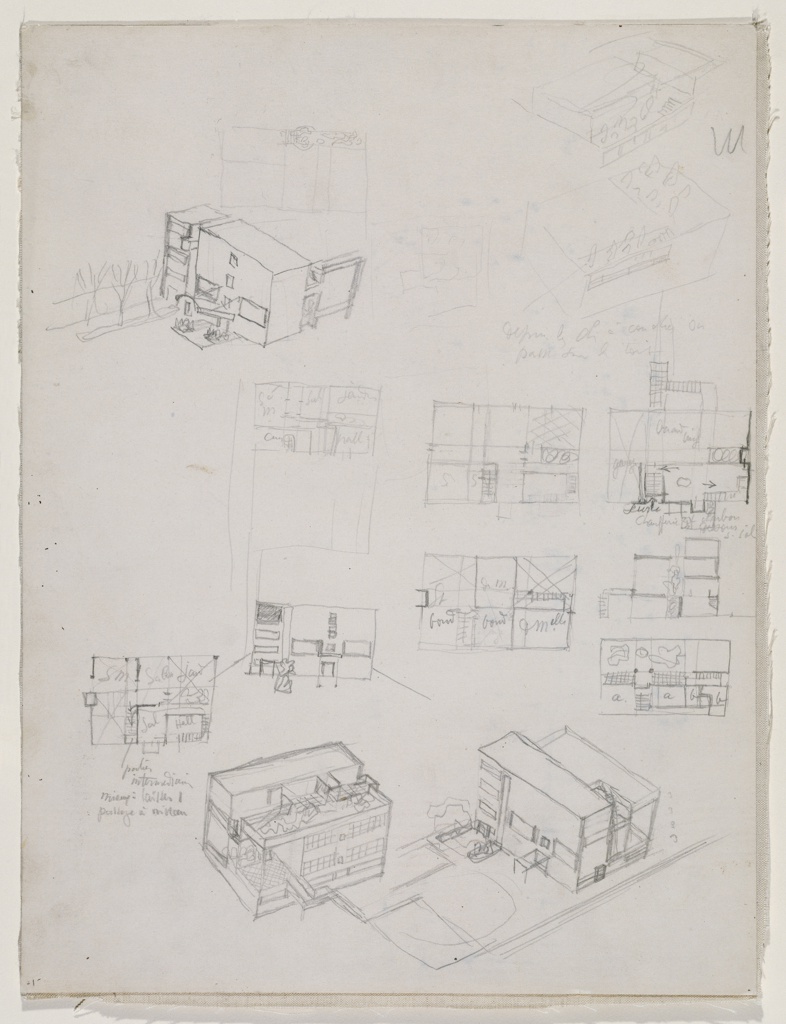 These sketches, drawn in the architect’s neat and confident hand, reveal three of Le Corbusier’s five rules for modern architecture: horizontal ribbon windows to allow maximum interior light, a roof garden, and a façade free of visible supporting elements, as the pillars (pilotis) supporting the house are set back under the façade. Another of his basic tenets, a free open plan, can be seen in another drawing in this series. The sketches in the upper and lower left also reflect two other characteristic elements of Le Corbusier’s architecture: a mathematical organization of elements, as in the ABABA vertical division of the façade, and the incorporation of a rectangular canopy suspended over the front doorway.

Le Corbusier traveled to the United States at the invitation of The Museum of Modern Art in 1935. In need of living expenses, Le Corbusier sold the studies for the Villa Stein-de Monzie directly to Calvin S. Hathaway, the Director and Curator of The Cooper Union Museum for the Arts of Decoration (now Cooper-Hewitt, National Design Museum).  Acquired just ten years after they were made, the Museum’s Le Corbusier drawings were the first works by the architect to enter a public museum collection in the United States.

Le Corbusier’s birthday was on October 6 and we are still celebrating!

Does anyone know if Michael Stein had an ornately carved sohmer baby grand piano?