While much about Sophia Crownfield’s professional life remains unknown, details published in various art and trade journals do show her commitment to developing a career in the decorative arts. She very likely had some arts training and was listed as a “china painter” in an 1888 Baltimore directory. Education remained important to Crownfield, and, after her move to New York City in 1889, she became a long-time member of the Art Students League. Evidence suggests that Crownfield dedicated the 1890s to wallpaper design; her design for wallpaper with wild azaleas was included in the Women’s Building of the 1893 Columbian Exposition. Her brother H. F. D. Crownfield (David), a talented lighting designer, patented two designs in 1894 jointly with M. H. Birge & Company of Buffalo, one of the largest wallpaper manufacturers in the United States. Sophia Crownfield’s color study for a forsythia wallpaper frieze seems to support a Crownfield family connection to this well-known company as it bears the written inscription “Used by Birge Co.”[i]

In 1902, Crownfield’s work was included in two exhibitions, one of which signaled a shift to textile design. At the Architectural League of New York, she exhibited wallpaper and textile designs as well as a warp-printed silk drapery fabric (the manufacturer was not noted in the catalog).[ii] The Allied Arts exhibition in the same year featured three of Crownfield’s flower studies of nasturtiums; she was praised for her skill in conveying their “velvety freshness.”[iii] In 1905, Crownfield began to patent designs jointly with textile manufacturer Cheney Brothers. The years 1905 through 1907 were productive ones for Crownfield, during which she patented 22 textile designs with the company. While she continued to work for Cheney Brothers as a freelance designer, the frequency of her patents with the company slowed after 1907, her final design patent with the firm was filed in 1916.

By this time, a forward-thinking new alliance had formed between manufacturers, museums, and designers. Dedicated to improving American textile design, the effort was led by the museum professional and design advocate M. D. C. Crawford, who also used his editorial position at Women’s Wear to promote a series of textile design competitions. Crownfield participated in these competitions, winning prizes in 1918, 1919, and 1920 for her textile designs. However, by the early 1920s, Crownfield’s career appeared to be waning or shifting, and mentions of her in the press were limited to a few exhibitions where she showed paintings rather than design work.

After her death in 1929, her sister, author Gertrude Crownfield, was determined to preserve her sister’s design legacy. In 1933, a memorial exhibition devoted to Crownfield opened at the Brooklyn Museum, where her design sketches remained on view for a month.[iv] In 1937, Gertrude arranged for the purchase of a select group of Crownfield’s drawings and textiles by Ward Cheney and Starling W. Childs, who later gifted them to the Museum for Arts of Decoration at The Cooper Union. 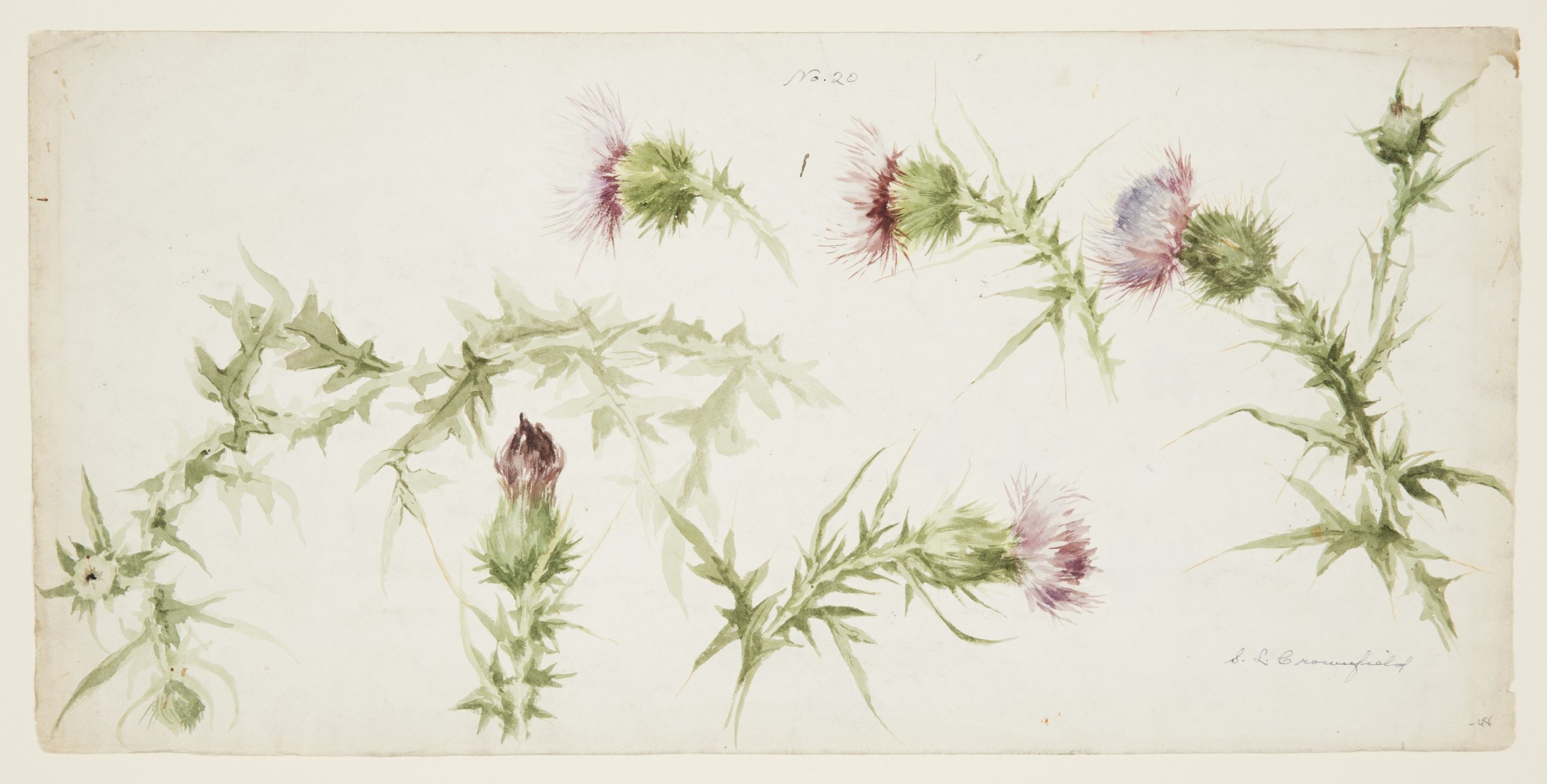 Crownfield’s approach to design can be seen in her drawings and color studies, which show how drawing from actual floral stems was a foundational practice for her as a designer. She re-worked these sketches to create a variety of specific patterns ranging from wallpaper borders and friezes to printed lengths of fabric intended for both fashion and interiors. The evident ease and confidence of her hand is apparent, especially in her treatment of floral patterns that retain a certain freshness and vitality even as finished products.

Sophia Crownfield: Drawn from Nature is on view at Cooper Hewitt through July 31, 2022.

[i] This wallpaper design is part of a large collection of Crownfield’s designs and textiles at the Decker Library, Maryland Institute College of Art and is on view in the exhibition.

[iv] William Henry Fox, Museums of The Brooklyn Institute of Arts and Sciences: Report Upon the Condition and Progress of the Museums for the Year Ending December 31, 1933 (Brooklyn: Brooklyn Museum, 1933), 8.

One thought on “Florals by Sophia”