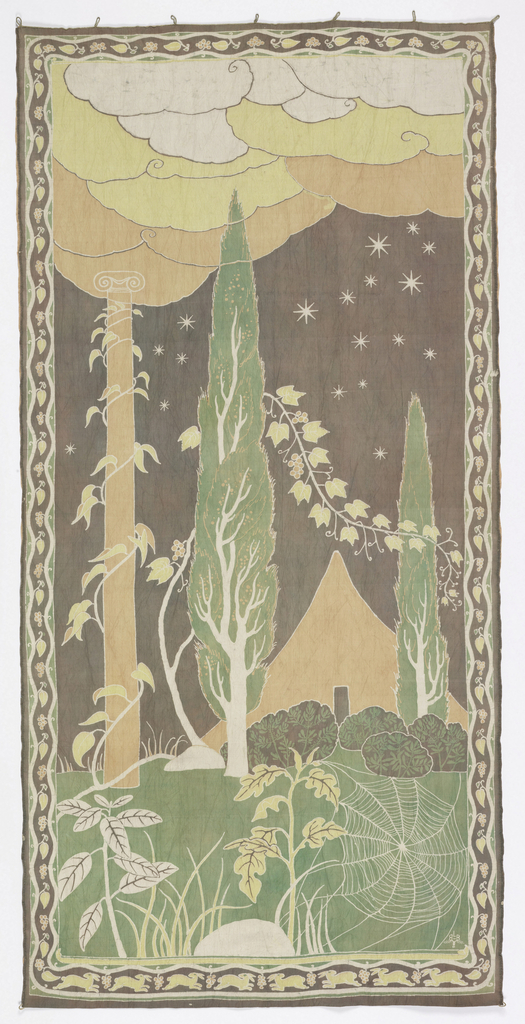 Designers can find inspiration from varying forms of creative expression. Looking at the batik murals of the American artist and designer Lydia Bush-Brown (1887–1984), her sources seemed clear. Sketches capturing scenes from her travel in the 1920s to Syria and Italy can be found repeatedly in her work. Murals featuring Syrian villages on terraced hills, a shepherd tending goats, a villager collecting pomegranates, and landscape views of Florence and Siena, are all rendered in her expressionistic palette. Closer to home, sketches of the New York City skyline and fish from aquarium visits provided further inspiration. Only after learning of her enthusiastic embrace of rhythmic dance in the 1920s and her association with its leading practitioners such as Florence Fleming Noyes, Alys E. Bentley, and Ruth Ingalls, my interest in her other batik murals grew.

Bush-Brown was introduced to the principals of modern dance before the 1920s and even appeared as a dancer in a production with Fleming Noyes in 1914. [1] For Bush-Brown, the mind-body connection was strengthened through movement and music; she mentioned it frequently in interviews with journalists. Rhythmic dance stimulated her imagination and informed her artistic practice by expanding her approach to “movement and the beauty of line” far beyond an academic one. [2] Camp in Connecticut, a batik panel from the early 1920s, is probably based on Bush-Brown’s visits to the Noyes School of Rhythm, a summer dance and movement camp opened by Fleming Noyes in 1921. Located near Portland, Connecticut, Shepherd’s Nine was and is today the school’s campground for women, and practitioners can stay in tents pitched on property. Her batik panel shows a night sky with billowing clouds and stars. A Greek column to the left of the tent is likely a reference to founder Fleming Noyes’ adoption of simple Greek tunics for dance and movement training. Bush-Brown continued this training during the 1920s with the goal of connecting the rhythms she discovered through the “poetry of motion” to her designs for batik. [3]