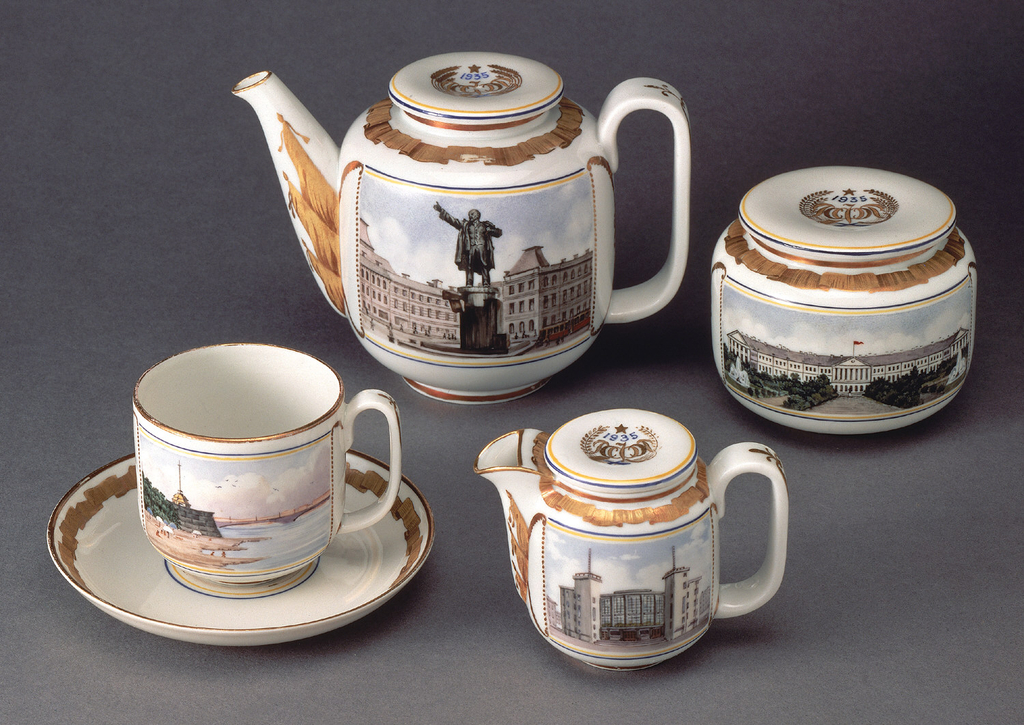 Eva Zeisel, a major figure in twentieth-century industrial design, won the National Design Award for Lifetime Achievement in 2005. Although best known for her contributions to mid-century American modernist ceramics, she worked with manufacturers around the world, in a career that spanned more than eighty years. Cooper Hewitt is fortunate to have examples from her Intourist tea service, designed in 1933 (Intourist was the Soviet Union’s official state travel bureau).

Zeisel began her career in her native Hungary in 1925, and by 1928, was designing modernist ceramics in Germany. After visiting the Soviet Union in the early 1930s, she took a job at the Lomonosov Porcelain Factory in Leningrad. Zeisel explored the factory’s archive of eighteenth-century tableware and realized that “the clean lines of modern design could be successfully combined with sensuous, classic shapes.”

Her Intourist tea service consists of short cylindrical and circular forms. To meet the Soviet drive to rationalize ceramics, Zeisel designed the simple shapes for inexpensive production as well as for visual and physical appeal. Designs for the Lomonosov Factory also had to meet state-set standards of social realism. This service’s painted decoration, “Leningrad, 1935,” designed by artist Varvara Petrovna Freze, commemorates the city’s new and old monuments. In celebration of Soviet achievement, a lively, colorful scene featuring a “modern” sculpture or official building is presented on one side of each piece. The Soviet self-image stands in contrast to a staid, gilded image of a historic site on the opposite side. The hot water pot[1] shows a view of Sergei Evseyev’s 1926 statue of Lenin, countered by the gilt image of the nineteenth-century St. Isaac’s Cathedral (below). Zeisel’s minimal ceramic forms are accentuated by traditional gilded decorations of ribbons and flags at the mouths, handles, and spouts. The service presents a fascinating combination of design for utility, for appeal, and for the communication of Soviet propaganda.

In 1936, one year after being appointed artistic director of the Russian china and glass industry, Zeisel was falsely accused of conspiring to kill Stalin.  She was imprisoned and spent most of the next sixteen months in solitary confinement, but was then abruptly released. Zeisel emigrated to the United States in 1938. She taught ceramics as industrial design at Pratt Institute in Brooklyn, and began to revive her design practice. She brought a unique and playful organic modernism to the tableware and furniture she designed well into 2011, when she died at age 105.

Fascinating, thank you, what a great post! I’m going to look online for more about Eva Zeisel right now!