Designed for the Wright Price 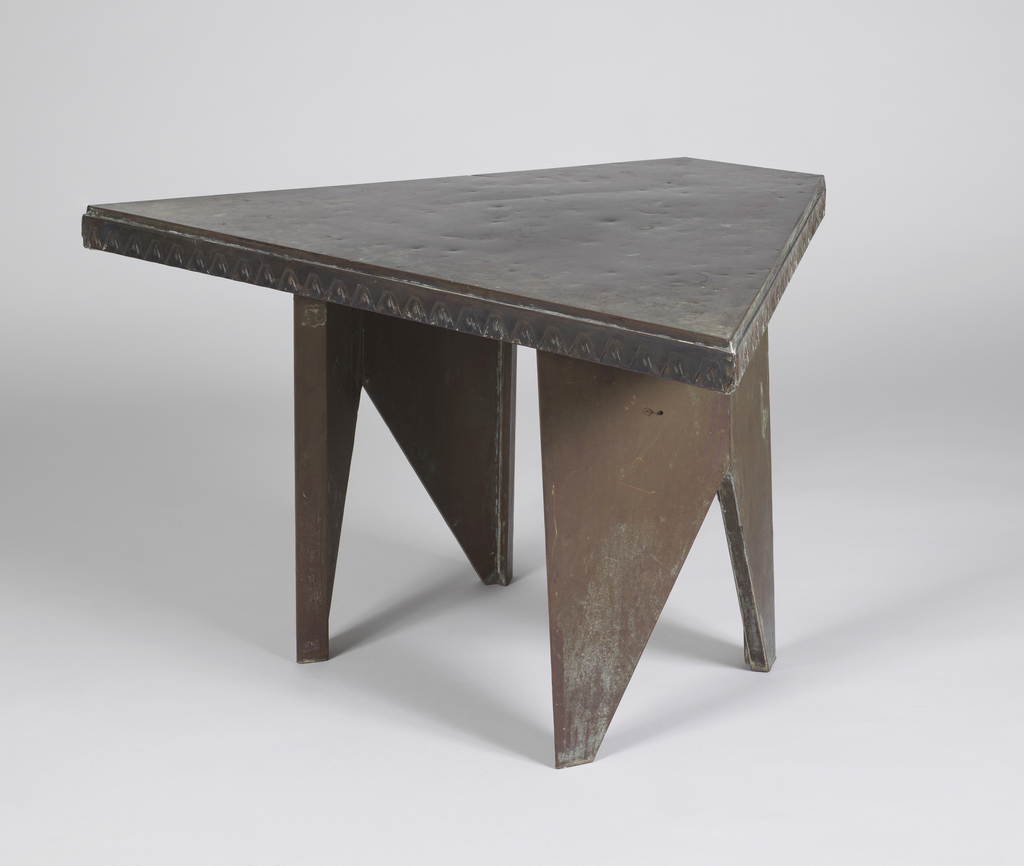 Clad in copper, this odd, angular table was designed by the American architect, Frank Lloyd Wright. It was part of a suite of furniture and built-in features Wright created in 1956 for Price Tower, a skyscraper the architect built in the small town of Bartlesville, Oklahoma.[1]

The building was commissioned by Harold C. Price to be the new headquarters for his pipeline manufacturing company. Wright convinced Price that the building should be a high-rise. As the starting point for Price Tower, the architect returned to and adapted concepts developed for an unrealized apartment building originally planned for downtown Manhattan.[2] In Oklahoma, four trapezoidal cantilevered floors extend outwards from a central core like a pinwheel. At Price’s request, the building would be mixed-use. Along with offices, one spoke of each floor was reserved for lofted apartments.

Guided by his belief in organic architecture, Wright wanted the building to be unified stylistically and conceptually. The apartment layouts, like the furniture within them, were based upon modular 30- and 60-degree triangles. The triangular elements  of this copper-covered table, for example, reflect this overarching mathematical principal. A photograph of the interior of a Price Tower apartment shows how these angular features were present throughout the space.[3]

Materials also played a crucial role in uniting the furniture with its architectural surroundings. The copper surface of this table echoed Wright’s use of the material on the facade of the building. Price Tower is covered with copper sun louvers—long slats used to block sunlight. The architect included the metal in many of his interior furnishings, including in specially designed stools and coffee tables for the apartments. From table to tower, the overall effect is a highly idiosyncratic design program that brought all elements of the building together as an organic whole.

[1] The nineteen-story tower was one of only two skyscrapers the architect ever realized during his career. For a comprehensive overview of Price Tower see Anthony Alfonsin, ed., Prairie Skyscraper: Frank Lloyd Wright’s Price Tower (New York: Rizzoli, 2005).

[2] Wright fondly referred to the project as “the tree that escaped the forest,” in reference to the design’s move from the densely compacted high-rise environment of St. Mark’s-in-the-Bouwerie in New York City to Bartlesville, which, at the time, consisted principally of two-story homes and low-rise buildings. Michael Mostoller, “The Towers of Frank Lloyd Wright,” Journal of Architectural Education vol. 38, no. 2 (Winter 1985): 16.

[3] Playing off this theme further, Wright included geometric patterned textiles from his recently designed Taliesin Line (used for the curtains and stools in the above photograph) manufactured by F. Schumacher and Company. The line had entered production in 1955.

2 thoughts on “Designed for the Wright Price”

It’s an interesting product. My parents used to have a similar table but it was used as a chair!)

Grace is a good example. He made me laugh!
Can you please tell me if your parent still has that chair?
I want to buy something like this for my kid and put it instead of the chair that’s behind the computer so that he’s not comfortable sitting and he’ll spend more time preparing for exams.))