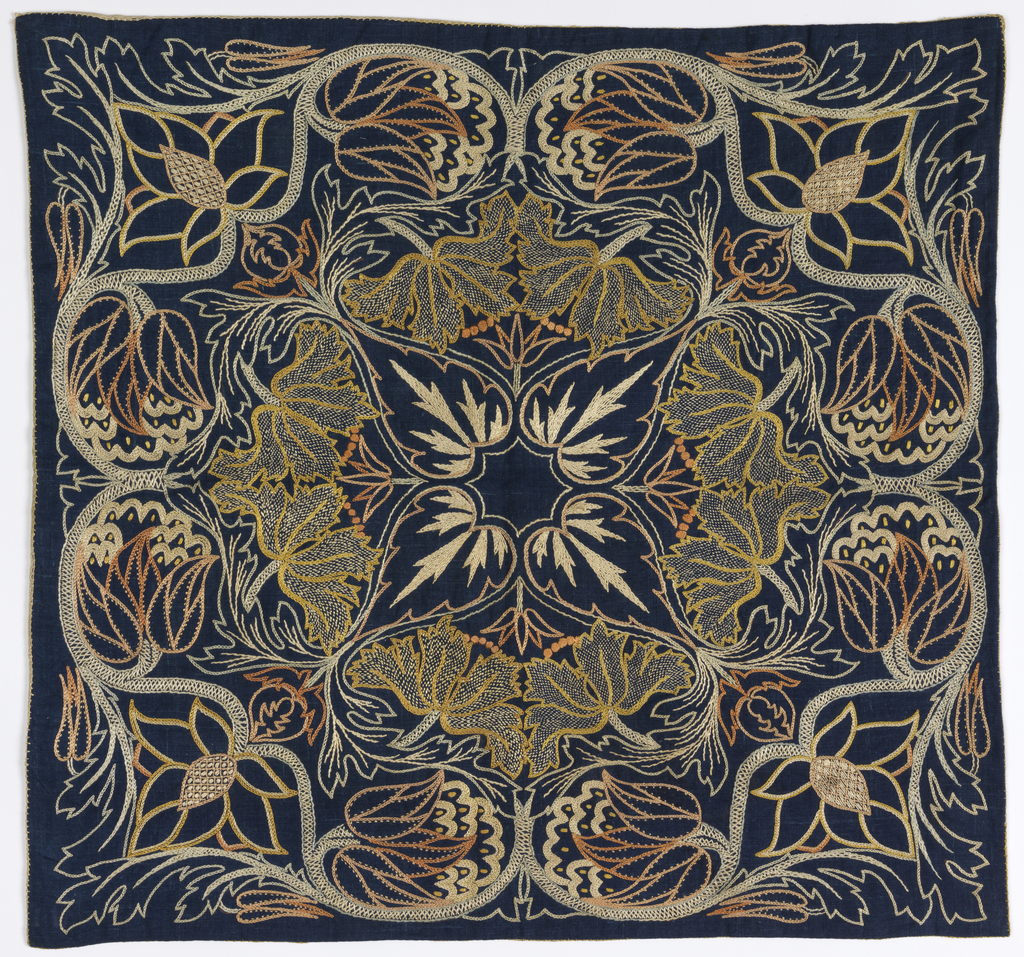 In celebration of LGBTQ+ Pride Month, June Object of the Week posts highlight LGBTQ+ designers and design in the collection. A version of this post was originally published on June 20, 2016.

May Morris will forever be in the shadow of her famous father William Morris, the chief protagonist of the English Arts and Crafts movement, and of her mother, the Pre-Raphaelite beauty Jane Burden. Yet she was an accomplished artist in her own right, a fact evidenced by the skillful design and craftsmanship of this cushion cover. From a young age, May was taught hand embroidery by her parents and she proceeded to study formally at the National Art Training School. In 1885, at age 23, May became director of the embroidery department at her father’s business Morris & Co. In this post, she produced original designs for a range of domestic items including cushion covers, bedspreads, fire screens, and tablecloths.

The muted “artistic” colors of this cushion were inspired by those found on near-Eastern textiles and were achieved through the use of vegetable dyes rather than bright synthetic dyes. The interlacing florals suggest influence from the Turkish embroideries being imported to London from Constantinople at the end of the nineteenth century, and also strongly resemble designs made by her father.

William Morris and his circle were dedicated to the preservation of traditional craft techniques threatened by mechanized production; embroidery with freehand stitching was promoted as a serious art form that demanded skill and creativity. Furthermore, embroidery was recognized as a viable way for women to gain financial independence. Like her father, May was deeply involved with socialist projects; in 1872 she founded a charity to promote the art of needlework through arranged apprenticeships, and in 1907 she co-founded the Women’s Guild of Arts to counter the lack of professional organizations open to women. Through these endeavors and her various teaching positions, May Morris had a tremendous impact on English embroidery at the turn of the twentieth century. Morris lived for decades at Kelmscott Manor, the center of her and her father’s creative practices, with her longtime companion, Mary Lobb, until her death in 1938.

Rebekah Pollock is a graduate of the History of Design and Curatorial Studies master’s program offered jointly by Cooper Hewitt, Smithsonian Design Museum and Parsons School of Design. She was a curatorial fellow in the museum’s department of Drawings, Prints and Graphic Design.