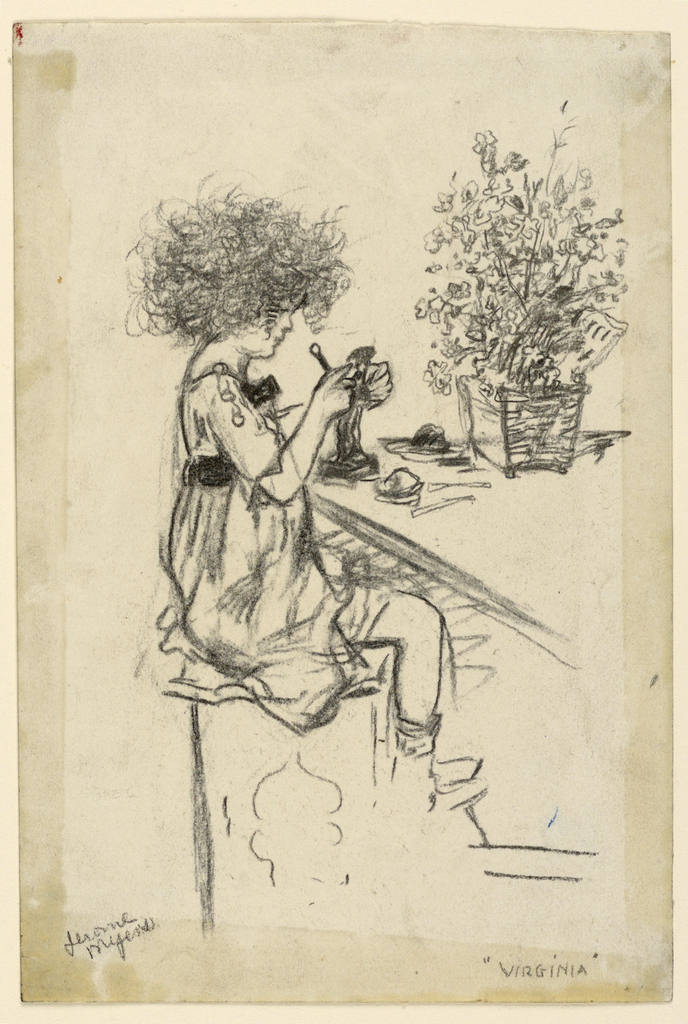 Jerome Myers always had a sketchbook close at hand. When weather prevented him from sketching city life in New York, he would turn instead to self-portraits or drawings of his family. In this sketch, the artist’s daughter—Virginia—sits at a table, making a small figurine out of clay.

Born in Petersburg, Virginia, Myers moved with his family to New York City in 1886 when he was 19 years old. Though he had been drawing for years, he had no formal art training. He enrolled in evening classes at the Cooper Union after work, and soon began to study at the Art Students League.

Myers became known for his scenes of immigrant communities on the Lower East Side. Carrying his sketchpad, he would go on long walks through Italian and Jewish neighborhoods, recording life as he saw it. In the summer of 1906, a reporter for The New York Times accompanied Myers for a profile on the artist.  He observed:

One may know the great east side fairly well, and yet it is a revelation to walk through it with so close a student of its life and its people as Mr. Myers has become…To walk slowly through this street, turning off here and there to glance at some particular house or group of people, is to receive an impression of a joyous life lived in the open air for much the same reason as people live in that fashion in Europe—because their homes are not as comfortable as the streets. [1]

Other drawings at Cooper Hewitt, like Tambourine Woman and The Peddler, show vignettes of daily life in the neighborhood.

The same year that Myers was featured in The New York Times, he welcomed the birth of his daughter, Virginia. At age 5, around the time that this drawing was made, Virginia was becoming a celebrity herself. She starred in the Edison Film Company’s 1000th film release—Dream Dances of Virginia Myers (1912). Known for her wild hair and improvisational dance style, she would continue to perform in New York theaters through the 1920s.[2]

In 1915, Jerome Myers began to experiment more with etching. He would often change the plate after printing a few copies, creating several states of each print. For colored etchings, he would hand color the plate and run off about three copies. The color tended to get lighter with each printing. Sometimes, he would choose to re-color the plate differently, leading to wide variations between different prints from the same plate.[3]

The print on the right is from the collection of the Smithsonian American Art Museum. The more brightly colored version on the left is in the collection at Cooper Hewitt. In the latter, the initials EM appear next to the artist’s signature in the lower right. The artist’s wife—Ethel Myers—likely helped with the printing. She was a student of Robert Henri, leader of the Ashcan School, and had painted her own scenes of life on the Lower East Side before meeting Jerome.[4]  After their marriage, she became better known for her bronze statuettes and figurines. Perhaps the original drawing for this composition was a family affair: Ethel may have been sitting at the table, though not pictured, teaching Virginia about her work.

[2] See Virginia Myers papers, (S) *MGZMD 442. Jerome Robbins Dance Division, The New York Public Library. Transcriptions of the letters are available online and read like a Who’s Who of the New York art world at the time. Virginia’s fans included director of the Metropolitan Museum of Art Edward Robinson, artist Edwin Howland Blashfield, poet Ridgely Torrence, arts patron Mabel Dodge, and photographer Jessie Tarbox Beals, who went so far as to compose a poem about the “wondrous little child / So full of life – so quiet yet so wild” (No. 31).

[3] See essay by Bruce St. John, Director of the Delaware Art Center, in the exhibition catalogue for Jerome Myers: Artist in Manhattan, 1867-1967 (Wilmington, DE: The Wilmington Society of the Fine Arts, 1967), p. 9.

[4] Jerome and Ethel Myers also had ties to Ashcan School artist John Sloan, and had a studio across the street from him when Virginia was born.