Blood in the Water 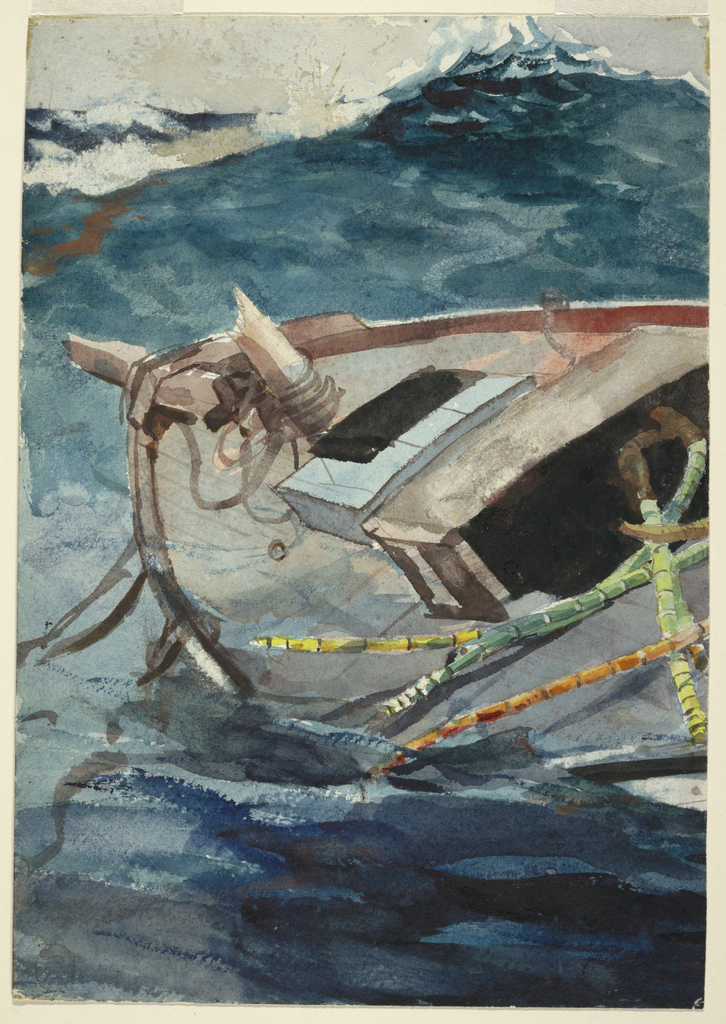 Related to his trip to the Bahamas, this watercolor by Winslow Homer is a study for The Gulf Stream, a painting in which a shipwrecked man lies on a battered fishing boat as sharks circle in the water. Focusing on the boat, this watercolor sets the stage for the action of the final scene. The mast is broken, and brightly colored sugarcane is strewn across the deck as the hull tilts below the water.

Homer continued to work and rework the final painting for years, adding details between exhibitions.[1] He began his career as an illustrator, and his work often has a legible narrative. When someone asked for an explanation of The Gulf Stream, the artist was clearly irked:

I regret very much that I have painted a picture that requires any description. The subject of the picture is comprised in its title…I have crossed the Gulf Stream ten times & I should know something about it. The boat & sharks are outside matters of very little consequence.[2]

Homer’s letter goes on to note that the figure has been blown out to sea by a hurricane. Concerned viewers can be reassured that he “will be rescued & returned to his friends and home & ever after live happily.”[3]

Homer’s piqued response underscores the significance of the water. The Gulf Stream is a warm, swift current in the Atlantic Ocean that starts in the Gulf of Mexico and follows the eastern coastline of the United States. Hurricanes traveling over the warmer waters can gain strength, explaining the rough seas and the damage to the boat. The study at Cooper Hewitt emphasizes the direct effects of the storm as the vessel lists ominously. Animated brushwork layers transparent blue washes, suggesting deep, churning waters. In the distance, bursts of spray punctuate the cresting waves.

Related watercolors now at the Brooklyn Museum and the Art Institute of Chicago show the entire length of the boat with sharks below. Here, the close-cropped scene creates a more open-ended narrative. We are left to wonder what happened to the crew, or if we are in the place of someone thrown into the water. An ominous streak of reddish-brown appears in the upper left—perhaps suggesting blood.

In 1906, The Gulf Stream made headlines when it became the first painting by Winslow Homer to enter the Metropolitan Museum of Art’s collection. So, after the artist’s death in 1910, why didn’t his family try to reunite this study with the finished painting? Charles Savage Homer, Jr., and his wife Mattie used to play bridge with the Hewitt sisters and would have heard glowing reports about their fledgling museum.[4] Homer’s elder brother and the sole heir to the artist’s archive of unsold works, Charles decided to give Cooper Hewitt more than 300 of Homer’s drawings and watercolors in 1912. Eleanor Hewitt later explained the museum’s interest in collecting the “first conception of numerous well-known pictures,” noting that studying an artist’s process provided valuable instruction for students.[5] Cooper Hewitt now has one of the largest collections of Homer’s work in the country.