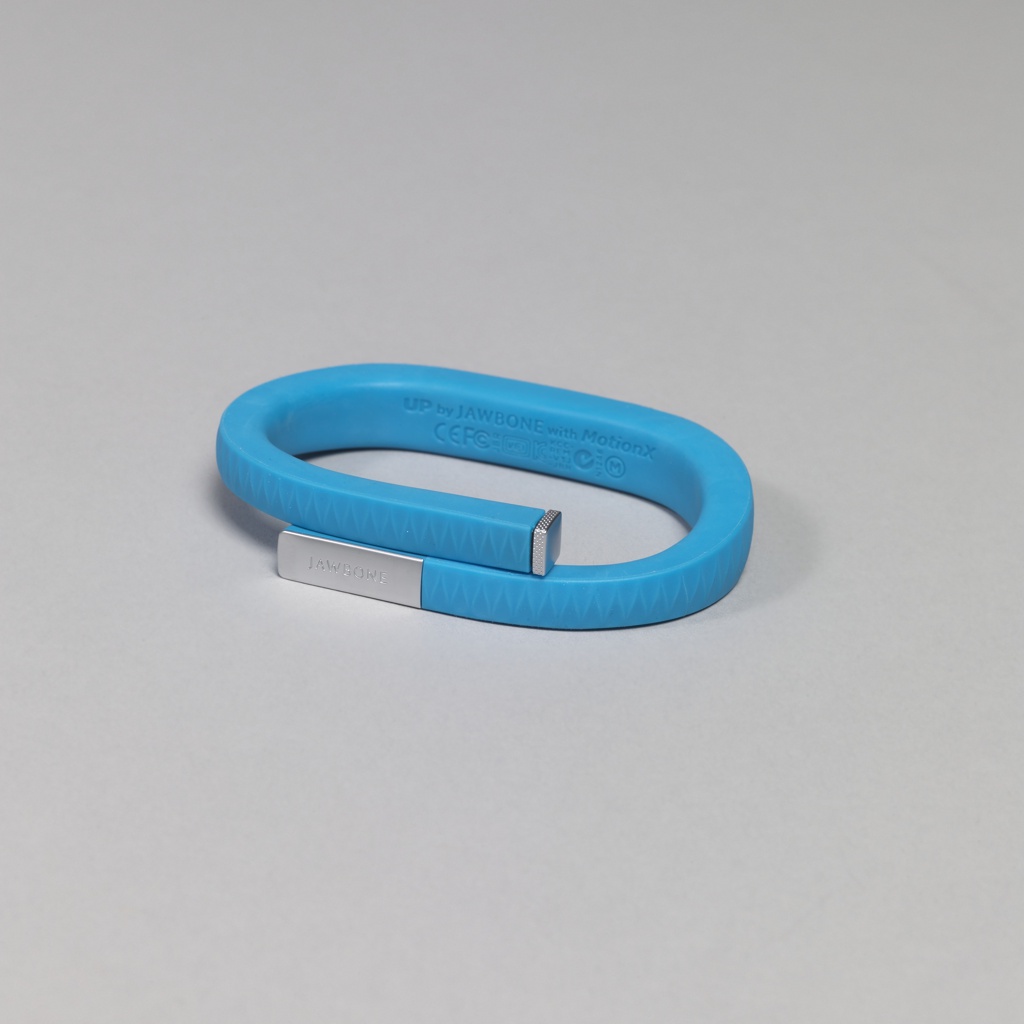 With changes in digital technology occurring so rapidly, the discreet design of this  wearable fitness tracker may well be forgotten in the coming years. In production from only 2011 to 2014, the Jawbone UP tracked the wearer’s steps, workouts, and sleep rhythms. An innovative product, it was the first fitness tracker styled to be worn on the wrist 24/7. The simple, rubber-covered coiled form of the slim flexible wristband and its later iterations remained unique: Jawbone’s wristband featured no screen. The tracked health data could only be visualized via a smartphone application. After the company wound down operations in 2017, the device’s online app platforms that were once available on Apple and Android smartphones ceased. Without these online features, this data tracker now has little function other than as a wearable accessory.

Jawbone, previously named Aliph, was founded by Alexander Asseily and Hosain Rahman in 1999. The business had early success designing military-grade audio technology for DARPA, the U.S. Department of Defense’s research agency for emerging military technologies. The team then went on to develop products for the commercial market with designer Yves Béhar and his studio fuseproject, who created the sleek and simple designs of many of their most popular products. Their award-winning smart Bluetooth headsets and speakers were the first of their kind, and prized for their design, function, and originality. In 2011, the company pivoted toward fitness-tracking devices and the UP was launched.

UP was Jawbone’s first fitness tracker and was faster-selling than any of the company’s  previous products [1]. Soon after the launch, stories of product failures arose. Water and perspiration could seep into the devices, shorting out capacitors [1]. UPs were breaking, and the product was pulled and relaunched shortly after. The revised model was followed by new iterations, but financial hardships, a lawsuit, and more product failures plagued the company.[2] The firm disbanded in 2017.

Though this wristband cannot function as it once did, the Jawbone UP marks an important moment in early fitness tracking wearables. It reflects a time when fitness tracking was becoming a lifestyle, prompting a need for designs that were not only functional, but also comfortable and attractive enough to wear 24/7.

Carolyn Herrera-Perez is a curatorial fellow in the Product Design and Decorative Arts Department at Cooper Hewitt, Smithsonian Design Museum and is a graduate student in the History of Design and Curatorial Studies Masters program offered jointly by Parsons and Cooper Hewitt.

← Between Constantin and Nogales
Lincoln Bookmark →