A Serious Case of PoMo… 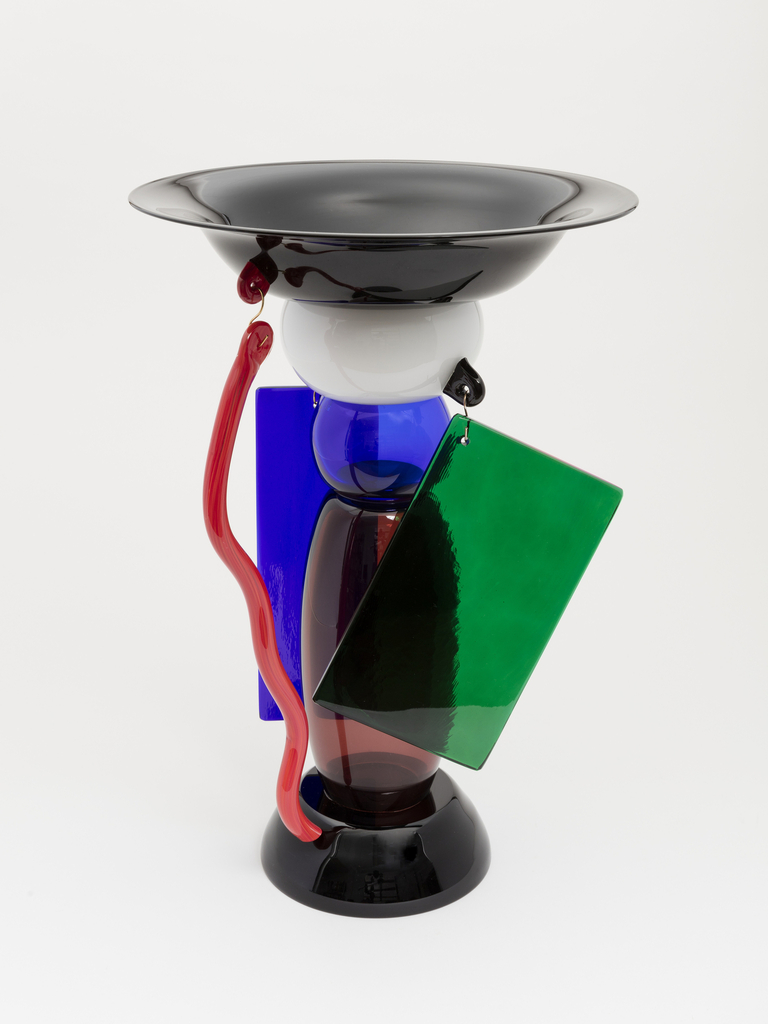 The bubble-like contours and dangling pieces of glass of this bowl are cartoonish and playful. The Efira Bowl was designed by Ettore Sottsass in 1986 for the important collective, Memphis, which he had founded five years earlier.[1] The bowl is a wonderful example of the objects produced by Memphis, which have been held up as paragons of postmodern design.

But what does “post-modern” even mean? The causes and boundaries of what was (is) post-modernism continue to be hotly debated among artists, historians, and philosophers alike. The emergence of postmodernism has been connected to numerous conditions, from changes in global economic structures to the emergence of new media in the last quarter of the twentieth century. But for the purposes of a short blog post about design, another way to think of postmodernism is as a change in the relationship between the arts and history.[2]

By the opening of the 1980s, many architects, artists and designers became disillusioned with the utopian promises for a better world offered by modernism. The modernist myths of progress and inclusivity appeared to be just that, myths, and were called into question. Post-modern designers turned away from vague visions for the future, and instead looked to the past to create new designs that could reinvigorate life in their present moment. In this act of historical reflection, humor and irony proved crucial antidotes to the serious task proclaimed by modernism. For example, architect Robert Venturi—a contemporary of Sottsass—playfully rethought the work of eighteenth century furniture designer, Thomas Chippendale, with his Chippendale Chair (1984) designed for the furniture manufacturer Knoll.

Meanwhile, the Efira Bowl employed a satirical response to modernism’s demand that “form follow function.” Afterall, the bowl itself looks more like a vase than a fruit dish—so much so it has at times been referred to as a vase. Adding to the fun of the Efira Bowl are the decorative pieces of blue, green, and red glass hung from various parts of the bowl’s tall body. The “decorative”—a term that became associated with the domestic sphere and gendered feminine—had long been the enemy of the modern designer who attempted to create a new world for a decidedly “new man.” With the hanging pieces of colored glass, however, Sottsass cleverly bucks the demands of pure function, and its gendered connotations, for the joys of the decorative. It is precisely this reflection on and questioning of the history of modern design that makes the Efira Bowl so characteristic of post-modern design.

← Balancing Nature, and Cupid, too
As Pretty as a Peacock, indeed →

One thought on “A Serious Case of PoMo…”

Both insightful & educational commentaries! Thank you for the submittal, and challenging our assumptions.