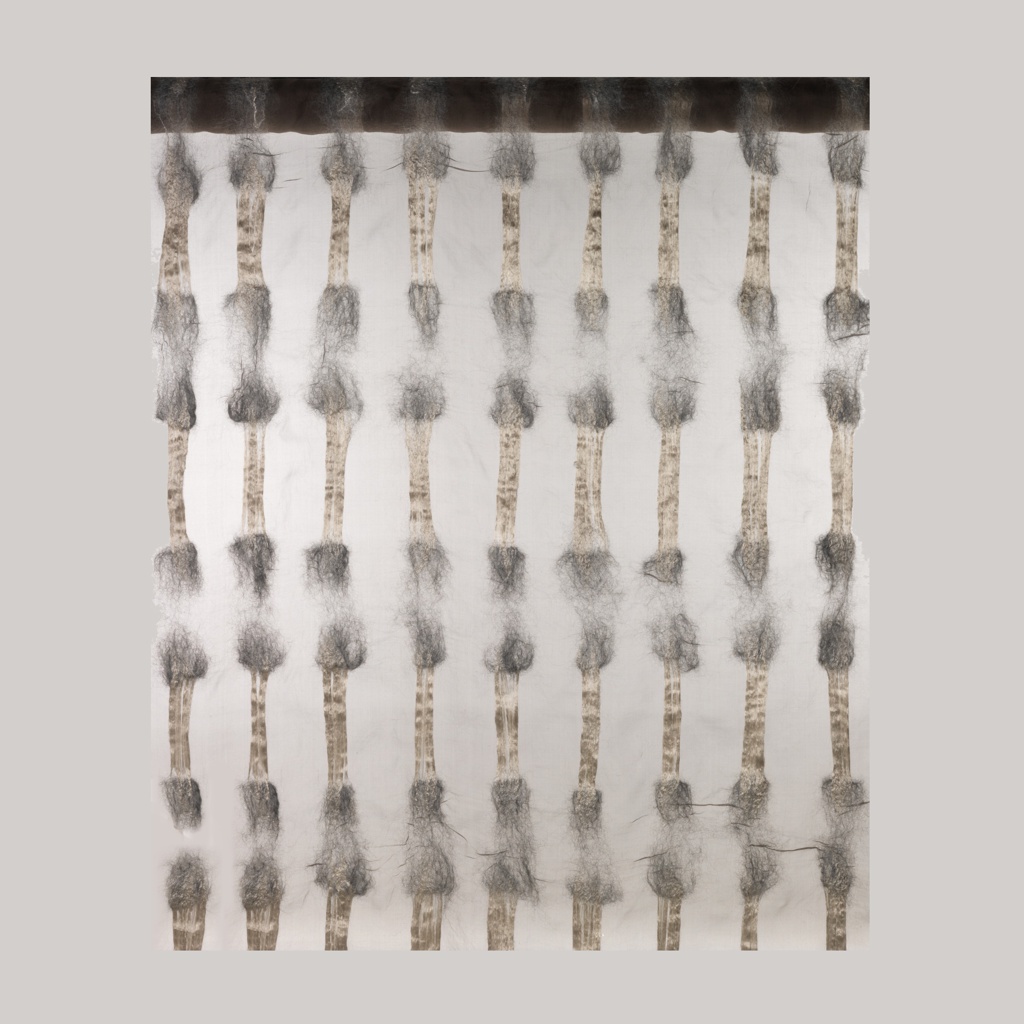 SI Alpaca demonstrates Claudy Jongstra’s interests in combining sheerness and opacity in lightweight, translucent structures, and in reintroducing historic dye plants such as madder and weld to the Netherlands. Jongstra planted a research garden specifically devoted to dye plants, and has studied with dye masters to learn historic techniques. SI Alpaca is dyed with walnut.

SI Alpaca reflects Jongstra’s interest in combining sheerness and opacity, a challenge she began pursuing in a commission from Triodos Bank in Zeist, the Netherlands (2008–10). Her exploration has resulted in experimentation with what is commonly called nuno felting, or felting through a woven substrate. SI Alpaca exemplifies this technique and provides an interesting technical comparison to float-pattern weaving, which the museum’s collection has in abundance. The piece also relates to some of Cooper-Hewitt’s contemporary Japanese textiles, in which the control of floating weft elements is produced through heat treating or chemical means.

Jongstra studied fashion design at the Academy of Art in Utrecht, the Netherlands, and established her own design studio after graduating in 1989. In 1994, upon seeing an exhibition on felt at the TextielMuseum in Tilburg, she became fascinated with its fabrication process and has worked exclusively in felt ever since, creating extraordinary felted fabrics for fashion designers such as John Galliano, Christian Lacroix, and Donna Karan, and for architects and designers such as Steven Holl, Will Bruder, Jasper Morrison, and Marcel Wanders. Jongstra is best known for her Drenthe Heath felts, already represented in the museum’s collection (2005-3-1 and 2005-3-2), which are characterized by their raw, primitive quality, with long locks of curly fleece still intact.

Jongstra’s work is held in the collections of museums including the TextielMuseum in Tilburg, the Stedelijk Museum, Amsterdam, The Museum of Modern Art, New York, the Victoria & Albert Museum, London,  and the De Pont Museum, Tilburg. Jongstra’s work has also been commissioned for major architectural projects, including Catshuis in The Hague, home to the prime minister of the Netherlands; the Dutch embassy in Berlin, the Amsterdam Public Library, and Lincoln Center in New York. In 2008, Jongstra was honored with the most prestigious Dutch design prize, the Prins Bernhard Cultuurfonds Prijs.