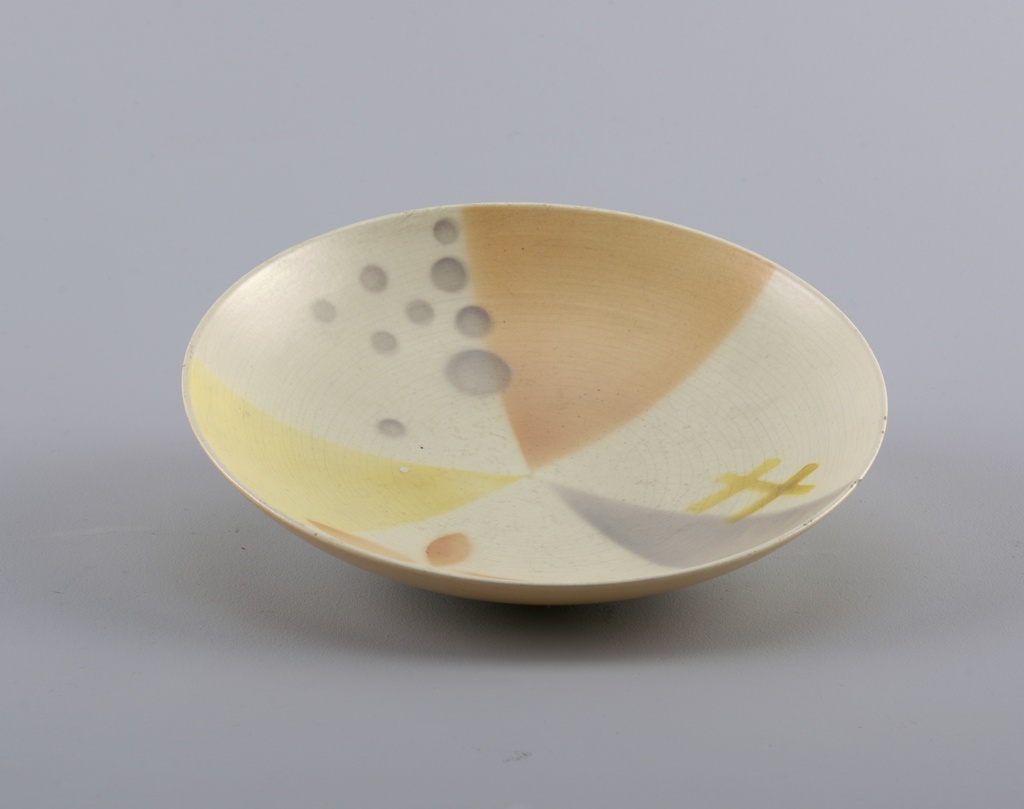 A compressor rumbling. A nozzle hissing. The colorful geometric shapes decorating this otherwise straightforward dish were not painted by hand. Rather they were applied by a device novel to the world of ceramics: the airbrush.

The important and prolific German designer, Martha Katzer (1897–1947), created this dish for the Karlsruhe Majolika Manufaktur (KMM) in Baden, Germany. Katzer arrived at the KMM in 1922, and quickly rose through the ranks. By the end of the decade, she had become a lead designer of KMM’s commercial ceramics.[1] The role came at a difficult moment in Germany. The country was still struggling economically following its disastrous defeat in World War I. Katzer’s designs for KMM, however, were able to find great commercial success because they incorporated new materials and approaches to the serial production of ceramics that made them more affordable and accessible to a broader market.

One example was the use of molded Steingut—an inexpensive porcelain substitute. Another, and more recognizable, was the introduction of Spritzdekor (airbrushing), which KMM began to implement in 1928.[2] The technique allowed for glazes to be applied quickly and evenly, leading to lower manufacturing costs. In addition, by using standardized stencils, color and decoration could be applied with greater ease and less technical training, reducing costs even further. Katzer, who had started as a ceramic painter, took to designing a number of stencils for KMM. Her designs incorporated layered geometric forms and repeating linear patterns. Influenced by the Bauhaus, this geometric aesthetic of German Art Deco had become all the rage by 1930. The combination of the simple geometry and bright, atmospheric airbrushed patterns in pastel colors led KMM to market their products as “Fröhliche Sachlichkeit” (Joyful Objectivity).

Devon Zimmerman is a  graduate curatorial research fellow in the Product Design and Decorative Arts Department at Cooper Hewitt, Smithsonian Design Museum and a PhD candidate at the University of Maryland, College Park.

[2] Tilmann Buddensieg, Keramik in der Weimar Republik: 1919–1933 (Nurnberg: Germanisches Nationalmuseum, 1985), 11. The use of airbrushing on ceramics was studied and eventually implemented at the Staatliche keramische Fachschule zu Bunzlau (State Ceramic School in Bunzlau).

← Wallcovering for your Sweet Tooth
A Sophisticated Sample →

I have fabulously colored 2 Liter jug I bought at a bargain price on 20/09/2020 from a flea market. I have photos available and wondered if anyone could tell me more about it. There are mold numbers of 1730 and a 3 on the bottom and a raised 2L mark with a tiny rectangle next to the “L”. Thank you for any replies.