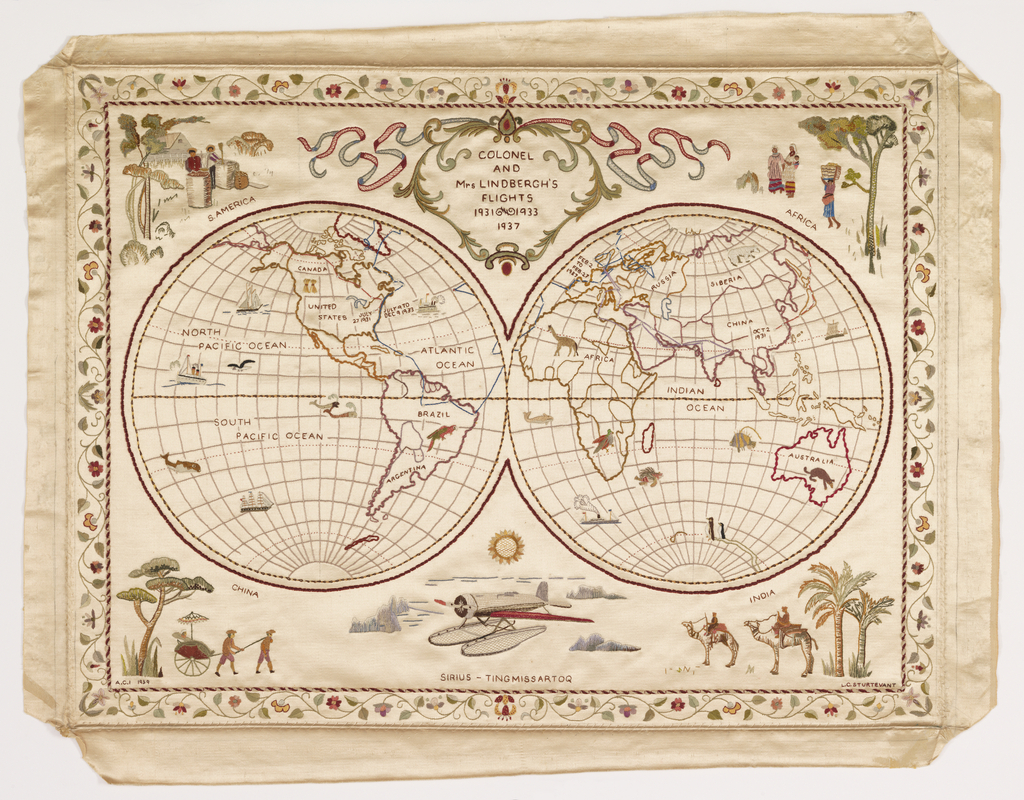 Posted by Kimberly Randall on December 4, 2019

This silk embroidery, titled “Colonel and Mrs. Lindbergh’s Flights – 1931 – 1933 – 1937,” is an extraordinary take on the tradition of the map sampler. Embroidered lines in blue, gray, and red trace the routes that Charles and Anne Morrow Lindbergh took on a few of their 1930s flights: in 1931, across Canada to Japan and China; in 1933, the North and South Atlantic; and in 1937, across Europe to India. The 1931 and 1933 trips were exploratory, testing out potential commercial air routes. The 1937 flight, by all accounts, was a vacation trip, a (relatively) quick jaunt from their home in England to India. These intricate zigzagging lines link two women – the embroiderer and the aviatrix — who, in very different spheres, pushed back some of the constraints of their day faced in how they lived their lives. It also leaves us with some unanswered, and perhaps unanswerable, questions.

Anne Morrow Lindbergh (1906-2001) wrote three books about the flights she made with her husband: North to the Orient (1935); Listen, The Wind (1938); and The Steep Ascent (1944). In the early ’30s the Lindberghs were famous for their exploits in the still young and dangerous field of aviation. Anne’s books were bestsellers. But over their lives and work hung the gray shadow of tragedy: the kidnapping and murder of their first child, which brought them ever more unwelcome public attention.

The sampler is attributed to Louisa Clark Sturtevant (1870-1958). She was a founding member of the Art Association of Newport, Rhode Island, which was also the home of the Aquidneck Cottage Industries. Louisa and her sister, Helena (b. 1872) studied art at the Boston Museum School and in Paris. Active participants in the art scene in both Boston and Newport, they maintained careers as painters, with studios in Newport.

So why did she choose to commemorate the Lindbergh flights in this needlework? Their paths do not seem to have crossed, socially or geographically. Perhaps she was inspired by Anne’s second book, Listen, The Wind, published in 1938. Or perhaps her political views on the approach of the Second World War coincided with theirs. The Lindberghs returned to the US in 1939 after several years in England and France, where they had gone to protect their family from the publicity frenzy around the kidnapping of Charles, Jr. On their arrival back in the United States, Charles became a prominent voice in the isolationist America First campaign.

Although Anne Lindbergh documented her life in diaries and letters (later published) as well as in her books, Louisa Sturtevant did not. Anne, almost two generations younger than Louisa, attended college, married a famous man, explored the world, earned licenses as a pilot and radio operator, bore six children, and established a successful career as a writer, with awards and bestsellers to her credit. Louisa’s legacy is in visual art, not literature; she studied art at home and abroad, she never married, and she lived her life as an artist and designer, active in her community, and considered a minor talent. Connected through this piece of needlework, each in their own way contributed to the wider array of life choices open to women in the 20th century.