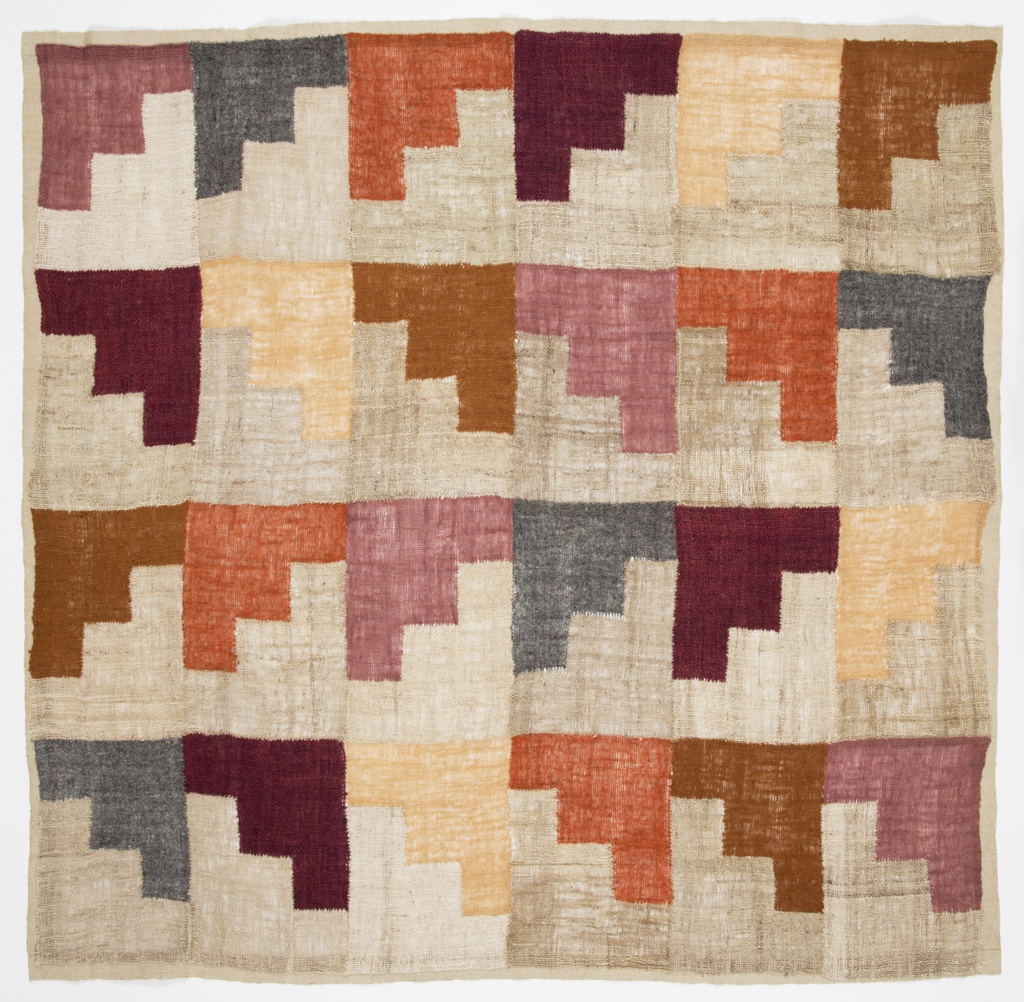 Paired sets of stepped blocks in harmony and balance echo an ancient process. James Bassler (American, b. 1933), in his work Six by Four II, incorporates an aesthetic of pure color through the interlacing of warps and wefts in a special way. By changing the colors of each block, linked one to the other, thread by thread, Bassler follows the concept if not the technique, of the pre-Columbian weavers of Peru, who managed to achieve extraordinary heights of artistic prowess as early as the 3rd century B.C. Respecting the knowledge and skills of these weavers, Bassler engages in his own methodology, for his own time and in his own place. The geometric dualities evoke a minimalism sensitive to the modern world: but in a world where process and integrity of making, compounds the weight and meaning of the statement.

Bassler is a California-based artist who has built his career around the art and craft of weaving: he is well known and beloved in circles of the art-world that embrace this interface. Bassler graduated from UCLA with an MA in Art in 1968, and returned to teach in the Art Department, eventually as Chair, for twenty-five years, from 1975-2000. Early in his development, during the 1950s, inspired in part by Somerset Maugham’s The Razor’s Edge, Jim traveled by freighter from London to India and from there to Indonesia and Japan, where he was greatly taken by the enveloping world of textiles that permeated these cultures. Immersed and enriched by the broad array of fibers, textures and colors, he became acutely aware of the nuanced variety of materials and specialized dyeing techniques that would become a critical part of his art and process. His subsequent study of the textile traditions of Latin America also became particularly important, and from the 1960s through the 1990s, he and his wife, a ceramist, lived part of each year in Oaxaca, Mexico, where he drew from experience of the rich traditions of the region. Wanting to understand the complexities of various weaving processes, he also focused on ancient textile techniques from Peru through the study of museum collections, especially that of the Brooklyn Museum, whose collection includes some of the most astonishing examples of the method from pre-Columbian Peru.

As a weaver, Jim excels in the painstaking process of thread by thread constructions, drawing on ancient methods intersected by modern conveniences. A number of his works are constructed in the highly specialized pre-Columbian Peruvian structure using discontinuous warps and wefts—where each colored element is used only where needed, but with each color section composed of the same color in horizontal and vertical interlacing—a type of weaving done in no other region of the world.

This object is currently on view in Nature by Design: Cochineal.

Elena Phipps is a lecturer in the Department of World Arts and Culture at UCLA and Senior Museum Scholar at The Metropolitan Museum of Art.