Waist Not, Want Not 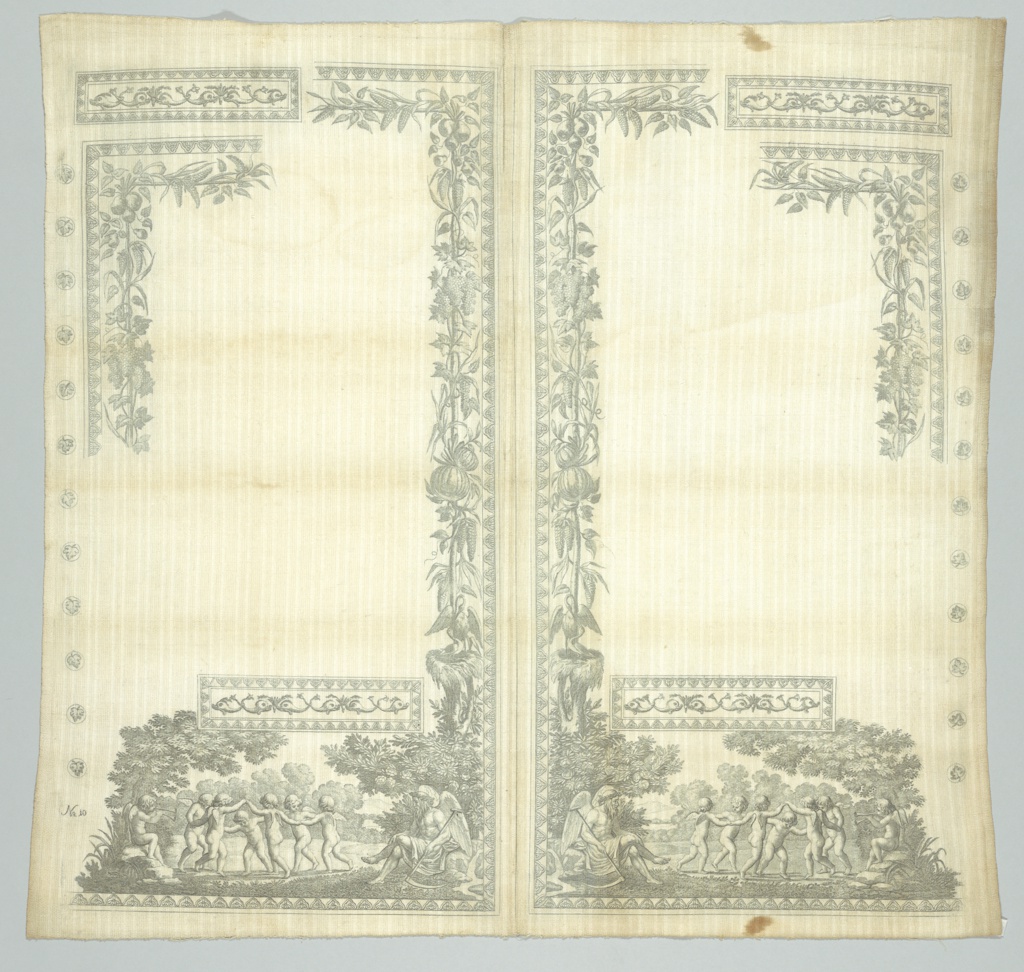 Posted by Kimberly Randall on November 5, 2019

While this textile might seem unrecognizable to modern eyes, to consumers in eighteenth-century France this textile was an object of fashionable and economic significance. These uncut waistcoat fronts display the layout of a pattern, adorned with copperplate printed motifs of vegetal imagery, intertwined dolphins, and a wooded scene at the bottom with putti dancing as an allegorical figure of Time looks on. In the corner is the inscription “No. 10,” suggesting that this was one of several sample prints available to consumers. In the French eighteenth-century clothing economy, garments were often custom-made creations. Buying a new piece of clothing required interacting with a whole network of creators that were each assigned tasks within a guild system. This particular waistcoat design would be printed then transferred to a merchant, who would sell the “No. 10” textile to a consumer, who would in turn bring the uncut fabric to a tailor who would construct the final garment. The waistcoat fronts would be paired with a plain fabric for the back section.[1]

A transition in waistcoat designs occurred between 1770 and 1790 and is evident when comparing these waistcoat fronts to other finished and unfinished examples in the Cooper Hewitt collection. Before the French Revolution, these garment designs were rife with luxurious silks and elaborate embroidered patterns. After the downfall of the Ancien Régime and the ostentatious tastes associated with it, new waistcoat designs emerged in the 1790s that incorporated cotton with less expensive printed surface designs. Fashion styles changed quickly, as evidenced when the fashion publication Cabinet des Modes declared that “in Paris it is rare that a fashion exists beyond three weeks or a month, in a fixed and unvaried state.”[2] Fueling this constant evolution of fashion was a change in surface design techniques, shifting from using time-consuming hand-embroidery methods to employing copperplate printing processes that could be reproduced rapidly in multiples.[3]

Today, it is possible to digitally manipulate the piece in the Cooper Hewitt collection to provide a vision of what the finished garment might have looked like. When comparing the original textile to the image below, one can see how the sections at the top and sides would be separated, with some of this material being used to form the collar. In addition, the printed circles on the sides would be used to cover and decorate buttons down the front of the garment. While this is just a digital speculation of the garment’s final appearance, it allows for modern viewers to gain a glimpse of how these types of textiles were used as elaborate canvases for printed imagery. Virginia Pollock is a Curatorial Fellow in the Textiles department at Cooper Hewitt, Smithsonian Design Museum, and a second-year graduate student in the History of Design and Curatorial Studies program offered jointly by Cooper Hewitt and Parsons School of Design.

← Big, Blue, and Bioplastic
USSR In The Ring →