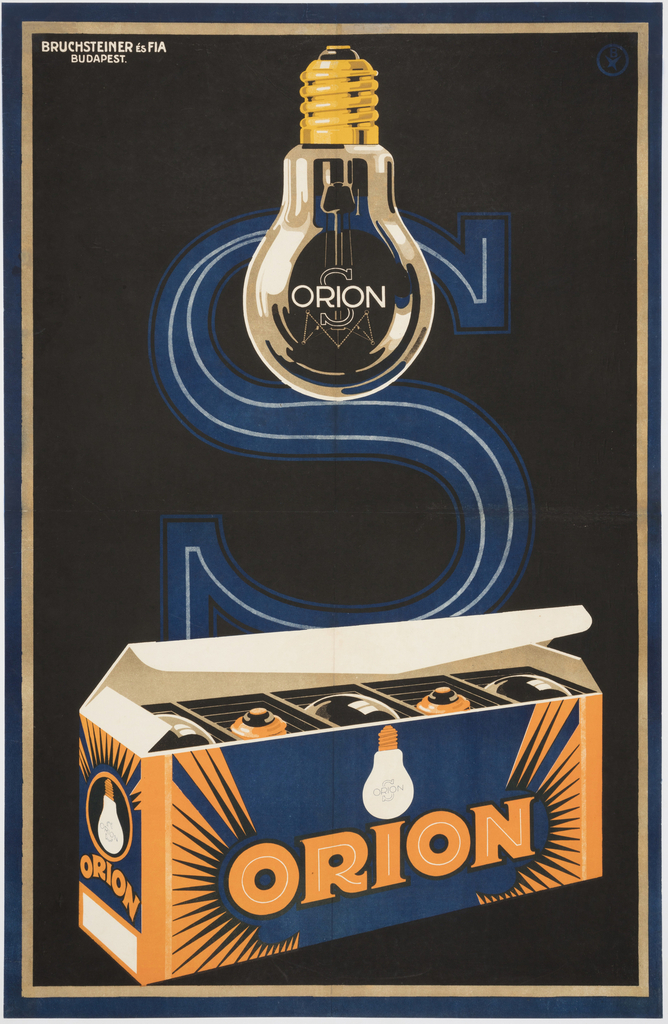 Apart from several months spent at Iparművészeti Iskola, Budapest’s school of applied arts, József Bottlik[1] was a self-taught graphic designer. Bottlik began his career in 1919 and quickly established himself as a designer of eye-catching commercial product and film posters, including a celebrated 1927 design for Universal Film AG (UFA) for the film Metropolis.[2] Bottlik was among a small group of modernist poster designers working in Hungary. Karl Rosner, writing about the state of Hungarian poster design in the German publication Gebrauchsgraphik in 1929, noted that only four years before it was “very hard for the poster artist to eke out an existence from the exercise of his profession.”[3] In 1925, Bottlik was hired as the head designer for Orion, a Hungarian electronics company, offering him steady work. While Bottlik continued to maintain significant freelance commissions throughout his career, his tenure at Orion lasted 40 years.

Bottlik created this poster to advertise lightbulbs produced by Orion, which had been founded as the Hungarian Wolfram Lamp Factory and rebranded in 1924. The poster plays on the style of sachplakat (object poster) by featuring a striking rendering of an Orion lightbulb hanging in the center. In the foreground, Bottlik illustrated an open box of the same bulbs. Bottlik cleverly uses the rendering of the packaging to show the company’s logo. A luminous blue “S” hovers in the background, echoing the “S” in the filament of the Orion bulb. The meaning of the “S” has eluded Cooper Hewitt curators thus far, but the elegant letterform demonstrates Bottlik’s skill as a typographer.

[1] Bottlik’s name is alternately published as “Joseph Bottlik” and “Josef Bottlik” in contemporary press published in English and German.