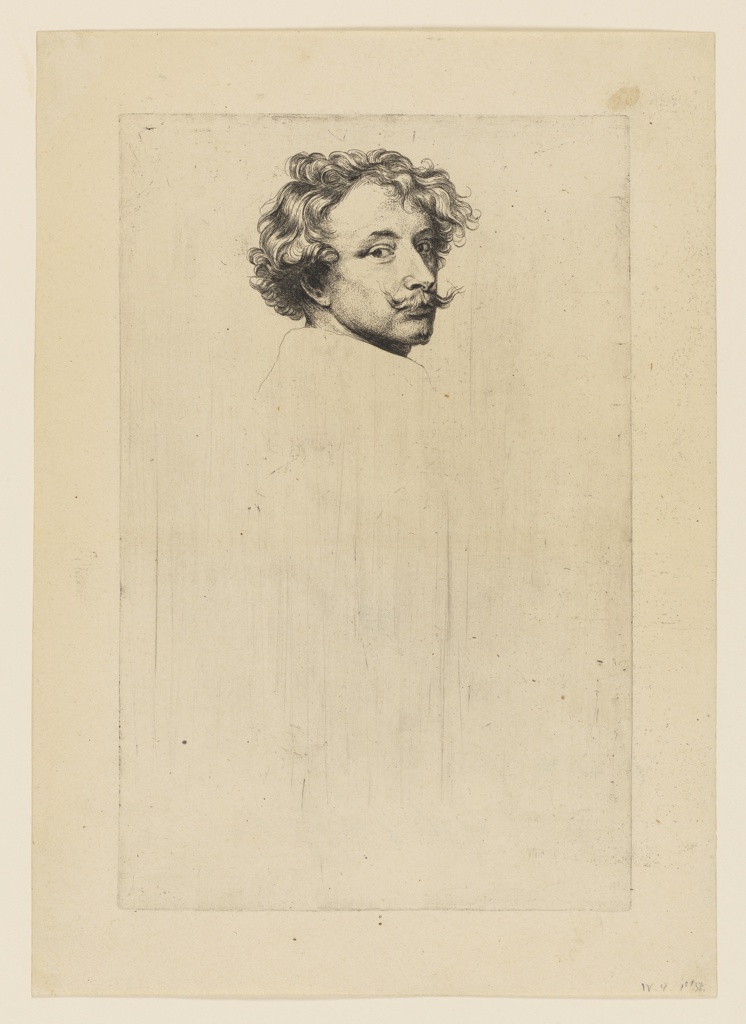 Sir Anthony van Dyck (1599-1641), knighted by King Charles I of England, was a Flemish painter renowned for his portraits of members of the British Court. Trained in Antwerp by Peter Paul Rubens (1577-1640), Van Dyck, like his teacher, experimented with making prints.[1] In the late 1520s or early 1530s, Van Dyck began an extensive project called the Iconography, a series of approximately 100 print portraits of the period’s most famous artists, scholars, and nobleman—naturally, the painter included himself. This striking self-portrait, remarkable in its restraint, captures the artist looking over his (implied) shoulder at the viewer. The work is unfinished, rendered in lines that are at once both rich and spare. The effect of Van Dyck’s bold and unhesitating gaze, suspended on a nearly blank page, results in a portrait that is arresting and immediate.

Despite his obvious talent, Van Dyck was not a professional printmaker. He likely chose etching as his medium for this work because it is closer to drawing than other print techniques, such as engraving.[2] This unfinished self-portrait is one of only about fifteen prints in the Iconography that Van Dyck actually etched himself; the others were engraved by printmakers hired for the project.[3] One of those artists, Jacob Neefs, later completed Van Dyck’s self-portrait, which was used as the title page for the Iconography when it was published after Sir Anthony’s death. [1] In the early seventeenth century, Antwerp was Europe’s most important center for printmaking and publishing, and both painters recognized the lucrative possibilities offered by the reproductive medium. Rubens worked with engravers to produce print copies after his paintings, but also created a few etchings himself, including a Saint Catherine.

[2] In etching, the artist “draws” easily with a needle on a coated metal plate. When the plate is dipped in an acid bath, the areas exposed by the needle are “bitten” by the acid, leaving indentations in the metal that will hold ink during the printmaking process. In engraving, the artist uses special tools to work directly on the metal.

[3] There are several prints from the Iconography in Cooper Hewitt’s collection. Some are early states where Van Dyck’s hand is apparent (such as the portrait of Adam Van Noort) and others are more finished prints largely created by his assistants (such as the image of Theodore van Tulden).

← Wenzel Friedrich’s Longhorn Furniture
No Surf with this Turf →

thank you! It is very iteresting article

Hi, I really liked your article. Thanks