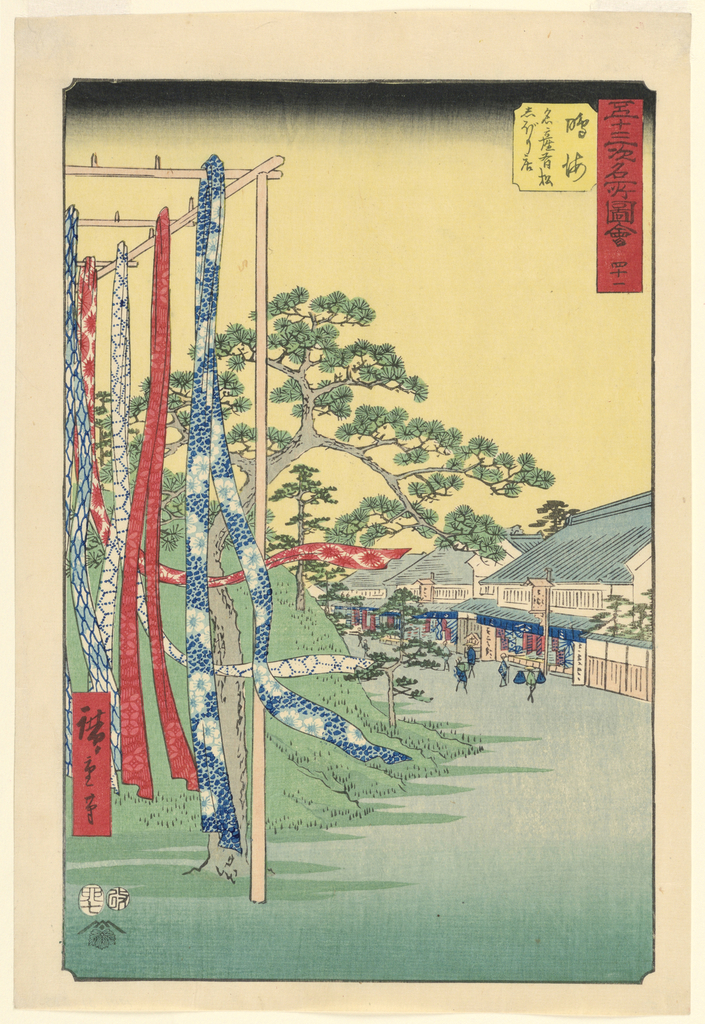 Though for centuries woodblock printing had been a prevalent method of inexpensively and widely disseminating religious texts in Japan, it was not until the eighteenth century that this technique blossomed to bolster the creation of pictorial compositions, more complex and richly colored than the written documents previously published. These prints, known as ukiyo-e, are both a celebrated creative endeavor and a vital record of the social and cultural landscape of Japan in the Edo Period.

This print in Cooper Hewitt’s collection is part of a larger series entitled Famous Sights of the Fifty-three Stations (Gojûsan tsugi meisho zue), also known colloquially as the Vertical Tôkaidô. Each print depicts a scene from one of the 53 rest stops along the main road that stretches between Edo (known as Tokyo since 1868) and Kyoto. The series of prints, related to Utagawa Hiroshige’s famous earlier project “53 Stations of the Tôkaidô,” revisits these iconic stations in a vertical format. This print (number 41 in the Vertical Tôkaidô), shows the town of Narumi (near present-day Nagoya), which was renowned for its dyed textiles. In the foreground, strips of brightly patterned cloth hang from tall wooden stands, fluttering in the wind as they dry. In the background, small figures pass in front of a row of shops, presumably the shops that would sell the product fabricated from the textiles: summer weight kimono.

In the nineteenth century, Edo was a prospering commercial center thanks to the economic success of the merchant class (paradoxically the lowest social class of the segregated feudal society[1]). With a growing diversity of patrons to fund and demand various artistic endeavors, makers of ukiyo-e prints capitalized on a well-worn technique to execute vibrant compositions depicting contemporary life. Ukiyo-e prints were relatively inexpensive to produce (the Brooklyn Museum cites the cost of one print as being equal to the cost of a bowl of noodles),[2] though this did not preclude enterprising publishers from creating deluxe editions catering to the upper echelons of society. The exemplary work of Hiroshige, demonstrated both in this series and others, built on the stylistic and technical developments of earlier printmakers, immortalizing charming scenes of daily life as well as grand landscapes in ukiyo-e.[3]

[1] During the Edo Period in Japan (1615–1868) society was divided into four hierarchical classes: warriors, farmers, artisans, and merchants.

[3] Department of Asian Art. “Art of the Pleasure Quarters and the Ukiyo-e Style.” In Heilbrunn Timeline of Art History. New York: The Metropolitan Museum of Art, 2000–. http://www.metmuseum.org/toah/hd/plea/hd_plea.htm.