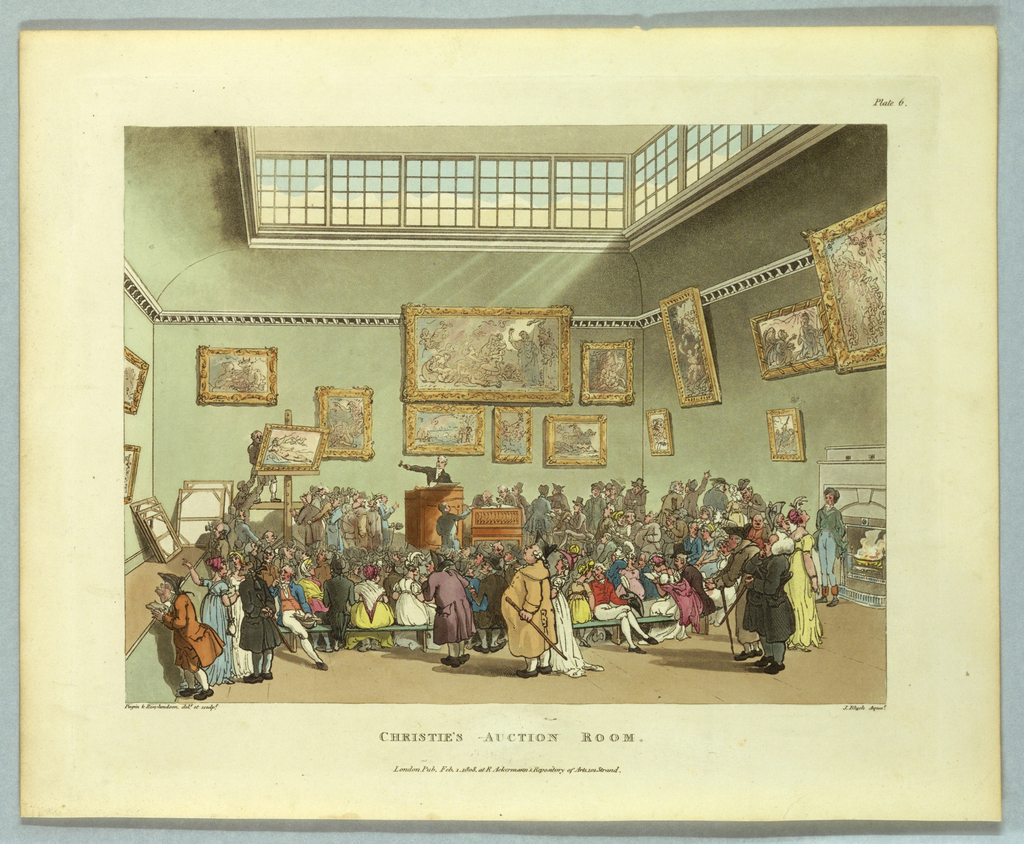 Comprised of 104 individual plates and published in three volumes between 1808 and 1810, The Microcosm of London was originally issued in twenty-six monthly parts. Published by Rudolph Ackermann (1764—1834), it supplied the luxury print market with a comprehensive volume on contemporary London. Cooper Hewitt holds a large number prints from the Microcosm, including this depiction of Christie’s Auction Room.

Architectural draughtsman Augustus Charles Pugin (1762—1832) and caricaturist Thomas Rowlandson (1756—1827) produced the hand-colored aquatints, depicting London as a cultured, connected, and prosperous metropolis replete with institutions of commerce, religion, and art. However, the composite nature of the plates and accompanying text by William Henry Pyne imbues them with a tangible tension surrounding class and culture, mirroring a rapidly modernizing London.[1] The caricatured crowds are often exaggerated by crisp and exacting architectural lines, which in turn are likewise made austere by the clamorous groups found within. In the introduction to the first volume, Pyne laments that too often architecture and figures are rendered by the same hand. “In consequence of this,” he writes, “the figures have been generally neglected, or are of a very inferior cast, and totally unconnected with the other parts of the print.”[2] He sees the dual employ of Pugin and Rowlandson as a remedy to this perennial folly, and goes on to laud the combined talents of both, equating the synoptic nature of the volume’s architectural and cultural representations to its presentation of contemporary Londoners, stating that the Microcosm “comprises almost every variety of character that is found in this great metropolis.”[3]

The boisterous and brightly-colored crowd in this print appears directly engaged with the art on view, yet in some instances their attention is focused  toward one another. While in some cases, Pyne’s accompanying descriptive text veers into historical accounts, trivia, or even gossip, when discussing Christie’s Auction Room, he describes “the various effect which the lot (a Venus) has on the company,” and how it is “delineated with great ability and humor… the tout-ensemble of this print is marked with propriety and interest. The great variety of character, the masses of light and shade judiciously opposed to each other, the truth of perspective, and the felicity of touch which the artist has adopted to give the idea of old pictures in the background, have the happiest effect imaginable.”[4]

One thought on “Caricatured Christie’s”

Congratulations, for the expertise of this incisive look at the “Microcosm of London” . Your commentary on the effectiveness of the crowd and your attention to the importance of employing two artists for the job – so perfect. I was entertained by the energy and could sense the excitement in the room. Bravo, Mir!