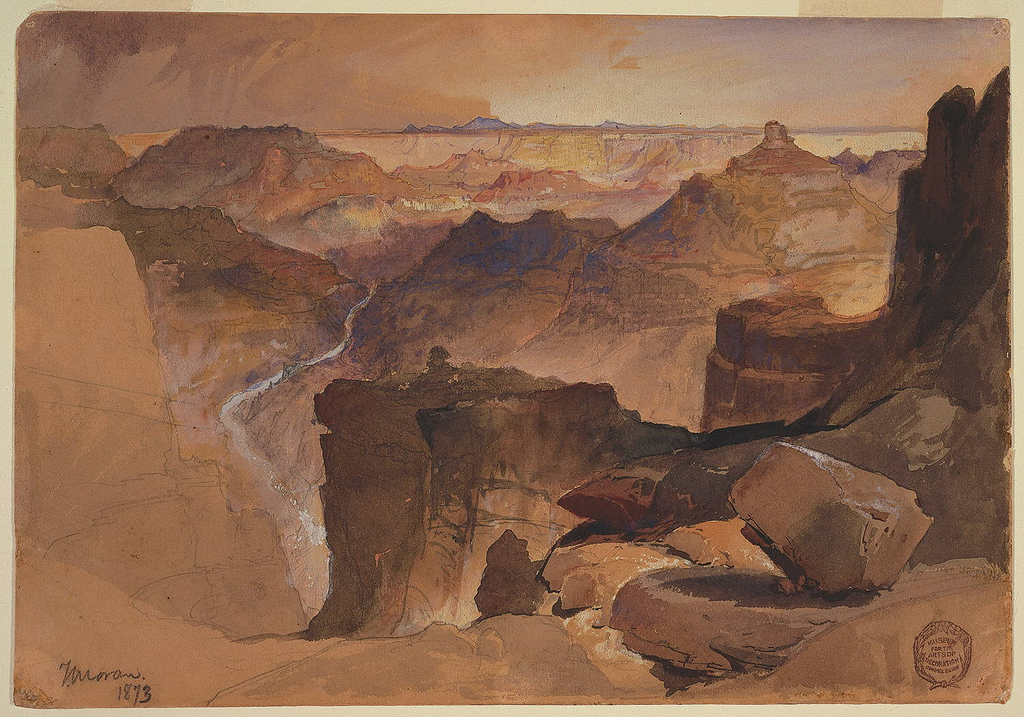 This year, the Grand Canyon celebrates its 100th anniversary as a national park.  Cooper Hewitt is home to some of the earliest images of the Grand Canyon by Thomas Moran, an artist who accompanied Major John Wesley Powell’s 1873 expedition to survey areas along the Colorado River through Utah and Arizona.

This expedition was not Moran’s first trip to the American West.  Previously, he had accompanied F.V. Hayden’s 1871 geological and geographical survey of Yellowstone.  Moran’s watercolor sketches recorded the vivid color of the scenery there—something no photograph of the era could capture.  Upon his return, these watercolors were circulated to members of Congress alongside the expedition’s report.  The images proved persuasive, and Yellowstone became the United States’ first national park in 1872.

Bolstered by this success and seeking new scenery, Moran joined Powell’s expedition the following year.  Powell later published an account of the journey in Canyons of the Colorado.  In it, he reflects on his earliest impressions of the Grand Canyon:

I did not know when writing the notes that this was the grandest view that can be obtained of the region from Fremont’s Peak to the Gulf of California, but I did realize that the scene before me was awful, sublime, and glorious—awful in profound depths, sublime in massive and strange forms, and glorious in colors…The landscape is too vast, too complex, too grand for verbal description.[1]

The watercolor study (above) shows the view from Powell’s Plateau, a scenic overlook now named for the expedition’s leader.  The rock formations in the foreground and to the left are loosely sketched in pencil.  The white stripe of the Colorado River winds along the center of the composition, between cliff faces painted with bright bands of blue, yellow, and rose washes.  The dark clouds in the distance indicate an approaching storm.[2]

After returning to his studio, Moran painted a monumental canvas—The Chasm of the Colorado—based on his watercolor studies of this view. The government purchased the painting for $10,000 to hang on public display in the U.S. Capitol Building.[3]

[2] Writer J. E. Colburn also accompanied the expedition and described the scene that inspired Moran’s watercolor sketch: “While upon the highest point of the plateau, a terrific thunder-storm burst over the cañon.  The lightning flashed from crag to crag.  A thousand streams gathered on the surrounding plains, and dashed down into the depths of the cañon, in water-falls many times the height of Niagara.” See J.E. Colburn, “The Cañons of the Colorado,” Picturesque America, Vol. 2 (New York: D. Appleton and Company, 1874), p. 510.

[3] The Chasm of the Colorado hung as a pendant to The Grand Canyon of the Yellowstone, a painting that Moran had completed in 1872 based on his watercolor studies of Yellowstone. Both paintings are now on view at the Smithsonian American Art Museum, lent by the Department of the Interior Museum.

← So Much Light Cast, So Little Space Used
The Scent of French Elegance →